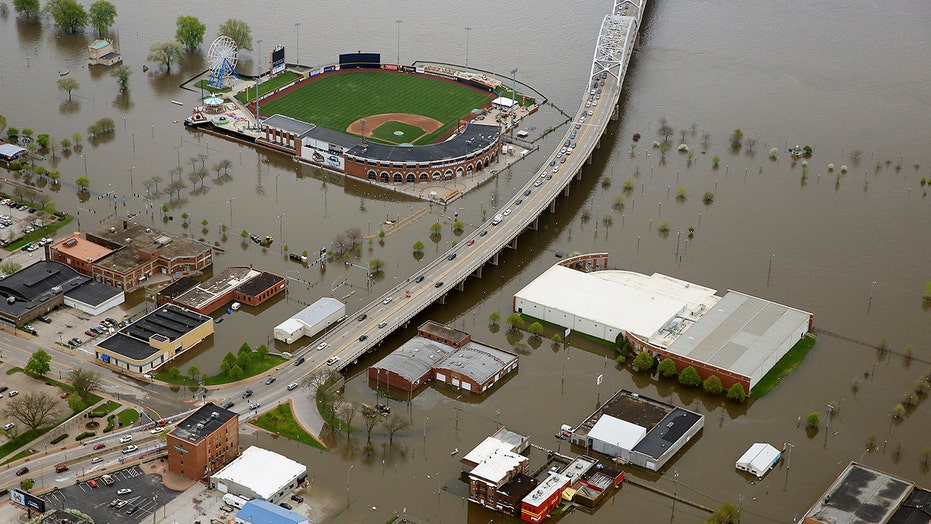 Mississippi River flooding in the Midwest has affected many people who live in Iowa, including a minor league baseball team that has been forced to play its first 40 of 43 games on the road.

The Quad Cities River Bandits, the Single-A affiliate of the Houston Astros, have played three games at the famed Modern Woodmen Park in Davenport. But the horrid weather the region has experienced over the last month-and-a-half has forced the team to lug its gear to several different venues.

CAL RIPKEN JR. REVEALS HOW BASEBALL LESSONS APPLY TO BUSINESS: 'YOU NEED TO SHOW UP'

Luckily for the organization, the park itself has been able to avoid the ravaging floods that have affected many outside its fences. In April, Canadian Pacific raised a stretch of railroad track outside the park to protect against rising floodwaters. However, a levee broke on April 30 causing the area outside the stadium to be inundated with water. When waters receded, it left behind rancid muck.

“The beauty of the park speaks to the fact that we want to keep it where it is. Moving it is not really an option, obviously,” Quad Cities GM Jacqueline Holm told the Associated Press.

Quad Cities was able to work out at the ballpark Friday, according to The Gazette. However, a series against the Great Lakes Loons was canceled because of the cleanup that is still needed around the stadium and officials couldn’t come to an agreement on a different site to play in.

Even with the challenges the River Bandits have faced, the team is still leading the Midwest League’s Western Division with a 23-14 record and hold a two-game lead over the Burlington Bees.

“This has almost made us closer,” Hansen told The Gazette. “We’re always laughing about it. Is this really real? We never knew where we were playing. Our families were trying to come in and watch us, we’re trying to make plans with that. One day we’re playing at home, then the next day, we all get a text saying ‘Oh, we’re playing in Peoria, we’re playing in Cedar Rapids instead.’ What can you do?”

The River Bandits plan to play in their home ballpark May 24. But before that happens, they must get through eight more road games – four in Peoria, Ill., and four in Kane County, Ill.