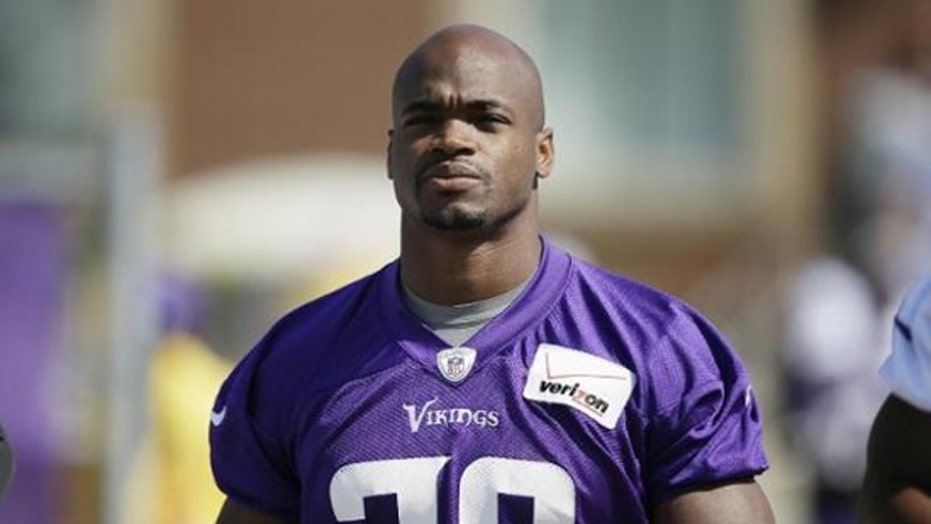 Vikings will let legal process play out before making a decision

Minnesota's governor on Tuesday called on the Minnesota Vikings to suspend star running back Adrian Peterson until an accusation of child abuse is resolved in the Texas legal system.

Gov. Mark Dayton added his voice to those questioning the team's decision to reinstate Peterson after benching him the week before. Peterson is accused of using a wooden switch to spank his 4-year-old son. He has said he was sorry for hurting the child but did not intend to and is not a child abuser.

"Yes, Mr. Peterson is entitled to due process and should be 'innocent until proven guilty,'" Dayton said in a written statement. "However, he is a public figure; and his actions, as described, are a public embarrassment to the Vikings organization and the state of Minnesota. Whipping a child to the extent of visible wounds, as has been alleged, should not be tolerated in our state."

Taxpayers in Minnesota are paying for roughly half of the team's new $1 billion stadium under construction. Dayton said he wouldn't let the Peterson situation sidetrack that deal.

"I will not turn my back on the Vikings and their fans, as some have suggested," Dayton said. "The Vikings belong to Minnesota — and in Minnesota."

"A lot of kids look up to these players, and it's not OK for the Vikings to send the signal that what happened is acceptable," Franken said.

"I believe that allowing Adrian Peterson to continue on as if nothing happened sends the wrong message," McFadden said.

Also on Tuesday, NFL Hall of Fame quarterback Fran Tarkenton — perhaps the most recognizable Minnesota Viking in franchise history — told FoxNews.com he was “embarrassed” by the team’s decision to allow Peterson to play.

“These are serious accusations,” Tarkenton said. “And the only way you’re going to get the attention of an NFL player is to take away his paycheck and take him off the field. This is way above winning or losing a football game. I strongly disagree with the notion of playing him this week.”