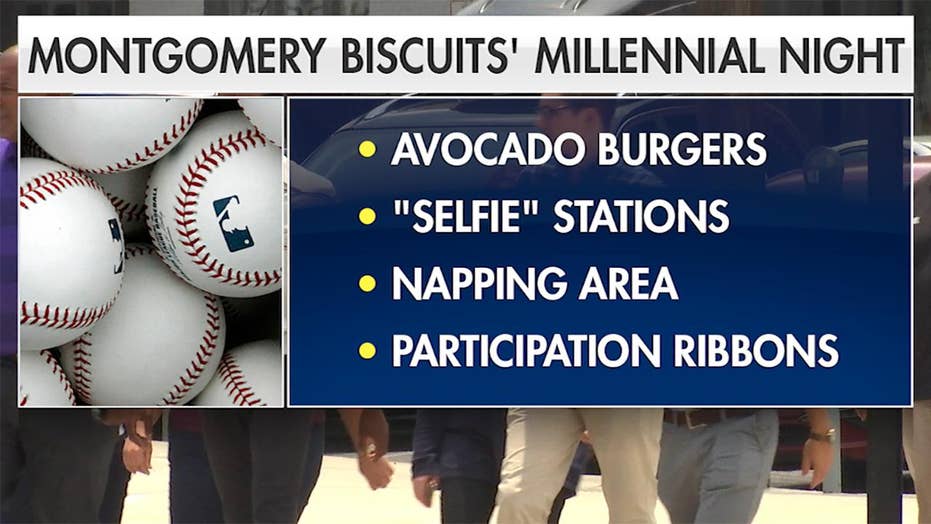 The Montgomery Biscuits are hosting 'Millennial Night' this weekend, but their advertising on social media set off an eruption of mixed feedback from the very group they're trying to attract.

MONTGOMERY, Ala. – If I say lover of naps, “selfies” and participation ribbons, you would say . . .  Millennials?

According to one Alabama minor league baseball team, those are the pillars of life for people born between the 1980s and early 2000s, along with avocados, craft beer and safe spaces.

In an effort to bring younger fans to the ballpark, the Montgomery Biscuits are hosting "Millennial Night" this weekend, but their advertising on social media set off an eruption of mixed feedback from the very group they’re trying to attract.

The Tampa Bay Rays’ Double-A affiliate, currently with a record of 15-11, tweeted last week: “Want free things without doing much work? Well you're in luck! Riverwalk Stadium will be millennial friendly on Saturday, July 21, with a participation ribbon giveaway just for showing up, napping and selfie stations, along with lots of avocados.”

Vice president of fan engagement, Mike Murphy, told Fox News this is just one of 70 promotions the Biscuits offer for their home games, ranging from Outdoors Night to Military Wednesdays and Autism Friendly Night.

The Riverwalk Stadium has a capacity of 7,000 people. (Fox News)

This season marks the first full year under new management, and the team is testing out its funny bone.

“80 percent of the people in our front office are millennials, myself included, and we’re just having fun with some of the clichés that people point out about millennials,” Murphy said.

The tweet advertising Millennial Night has since gone viral, with nearly 700 retweets, 600 comments and 1,500 favorites.

One tweet read: “As a non-millennial, I think your copy was supposed to read, ‘Riverwalk Stadium will have a condescending promo intended to ensure millennials never visit again.’”

Dallas Godshall, 21, said he expects attendance to decline after the advertising. “I’m not gonna go to it, so it didn’t work on me,” he chuckled. “More than targeting millennials, it’s sort of targeting older generations who like to make fun of millennials and like to say that millennials don’t like working and don’t like caring for themselves.”

Though for every angry comment, another appears to fire back in defense.

Another Twitter user said, “If you’re an offended millennial complaining about this, aren’t you basically furthering the stereotype? #thinkaboutit.”

Murphy said the team is sorry if its advertising offended anybody, but they are standing by Millennial Night and would not change anything about their approach.

After the initial explosion of angry tweets, the Biscuits took to Twitter again, urging anyone who’s offended to fight their battles IRL – slang for in real life – and submit a valid complaint in person to the “Millennial Night Thinktank.”

The team itself is largely made up of millennials, none of whom, according to pitcher Benton Ross, are even remotely offended by the theme night.

After throwing the ball around with one of his teammates in the un-ignorable heat, Ross told Fox News: “If it’s insensitive, then maybe they should just have thicker skin.”

He said the theme night is all in good fun. “I don’t think [Biscuit employees] meant anything sour by it or to cast a negative light on the next generation at all,” Ross defended. “I think they’re trying to make light of it and encourage the next generation to come out, support the Biscuits, support baseball and just be themselves.”

The Biscuits are hoping for a similar effect, and one public relations expert said they could very well pack the house at Saturday’s game. The Riverwalk Stadium has a capacity of 7,000.

“From a PR professional’s perspective, they’re kind of accomplishing what all of us want to accomplish, and that is people talking about your organization, not only here locally, but it’s got a lot of reach outside of our own community, outside of our state as well,” said Melissa Warnke, vice president of Public Relations Council of Alabama.

But Warnke warned companies must be mindful of how their messages will be perceived by different audiences, adding that the Biscuits will have to work extra hard to show their appreciation for the millennial fans they lost.

For now, Murphy is enjoying the newfound attention on the Biscuits, exposing people across the country to their players, gear and name. “So many people have said, ‘Oh my gosh, I never knew there was a team named the Biscuits!’”