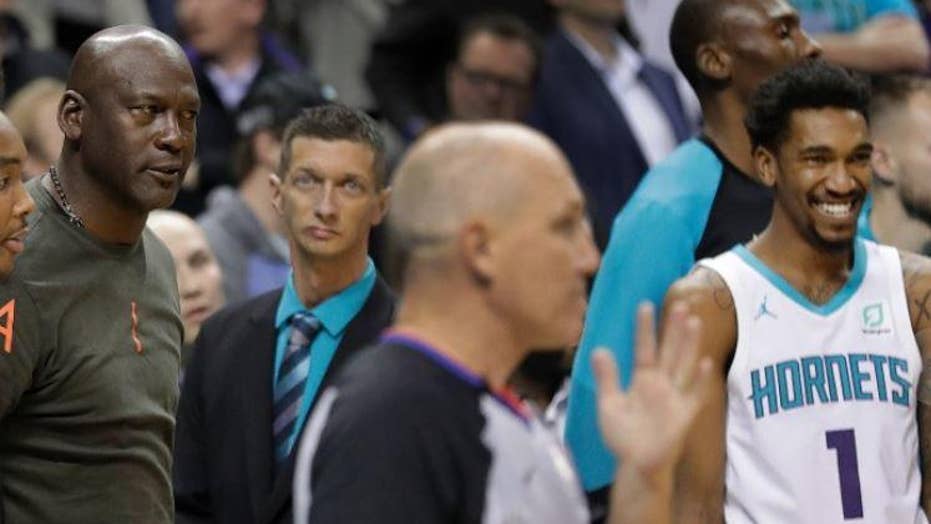 Michael Jordan, the owner of the Charlotte Hornets, was seen in a video Wednesday slapping the back of one of his players’ heads after the player rushed the court to celebrate a win prematurely and received a technical foul.

Jordan’s light slap of Malik Monk’s head came in the closing seconds of the Hornets’ win against the Detroit Pistons. Monk and teammate Bismack Biyombo ran from the bench to celebrate Jeremy Lamb’s game-winning shot.

However, there was still 0.3 seconds left in the game and the Hornets received a technical foul for having six men on the floor. Jordan defended himself Thursday.

“It was like a big brother and little brother tap,” he told the Associated Press. “No negative intent. Only love!"

Monk also laughed it off and noted that Jordan, a six-time NBA champion and arguably the greatest basketball player of all-time, was just playing around.

“… It's Mike, and whatever he does is going to make [news] because nowadays it's all social media and everybody has their phone out there and I wasn't surprised.”

Biyombo said he didn’t realize there was time still left on the clock.

“I did not realize we still had time on the clock,” he said. “I was watching the replay and you could see I was all the way out there [and] Malik was on the court...When Jeremy Lamb pointed at the clock, we were like, 'shoot, we still have a lot of game to play.’”