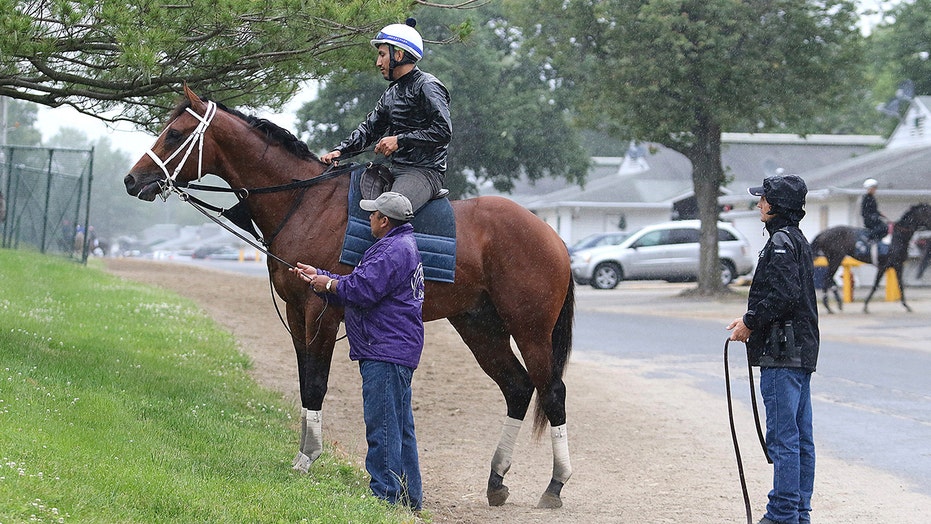 The Triple Crown series was marked by the unexpected and the whacky 3-year-old season continued when Maximum Security returned to racing for the first time since being disqualified in the Kentucky Derby.

Sent off as the overwhelming 1-20 favorite, Maximum Security simply got beat. There was no DQ, no runaway horse like in the Preakness or improbable winner like in the Belmont.

It was just an upset marked by a stumble at the start that might have cost Maximum Security the race and left the division wide open.

Second-choice King for a Day stalked Maximum Security from the start, took the lead in the stretch and posted a one-length victory in the $150,000 Pegasus Stakes at Monmouth Park on Sunday.

"I think the next race will be better," said Jason Servis, the trainer of Maximum Security "We needed to get that of the way. I was glad to get it out of the way even though he got beat."

It marked the first time Maximum Security has not crossed the finish line first in six career starts, and the stumble might have been the difference.

"It was a tough week," said Servis, who had debated whether to run Maximum Security because he was not sure he was ready. "He was feeling pretty good this morning. He was jumping and kicking. But the stumble hurt us a lot."

Maximum Security and regular rider Luis Saez broke from the No. 2 post and quickly recovered from the stumble to take the lead in the field of six 3-year-olds.

Jockey Joe Bravo moved King for a Day from the No. 3 post to his flank and the two made this a two-horse race until the Todd Pletcher-trained winner wore down Maximum Security in the stretch.

"I really felt comfortable getting into the turn," Bravo said. "I could see Luis was already riding. I could see that he was in trouble. Turning for home, Maximum Security did pull away a bit. My horse was still going comfortable."

"In the end he was a little tired," Saez said. "I'm not disappointed. Definitely not. He will be OK. I think he needed the race. This is horse racing. Anything can happen. He's a real good horse. That hasn't changed. I think the next time he will be OK."

Owned by Gary and Mary West, Maximum Security finished 1 3/4 lengths in front of Country House in the Kentucky Derby on May 4 but was disqualified by Churchill Downs stewards for interference with eventual Preakness winner War of Will.

It marked the first time in the 145-year history of the Derby that the first-place finisher was disqualified for interference.

The Wests are challenging the Kentucky Derby disqualification in federal court.

Last Judgment was fourth in the Pegasus, followed by Identifier and Caladan in the feature on the Father's Day card that drew 24,062.

Country House has been galloping at the track in recent weeks, but Mott has not been satisfied with how the colt trained and looked. He was shipped to Saratoga last week and will be sidelined for two months or longer.

Maximum Security is next expected to run in the Haskell Invitational here on July 20. Pletcher said King for a Day will join his stable at Saratoga and be evaluated before deciding his next start.