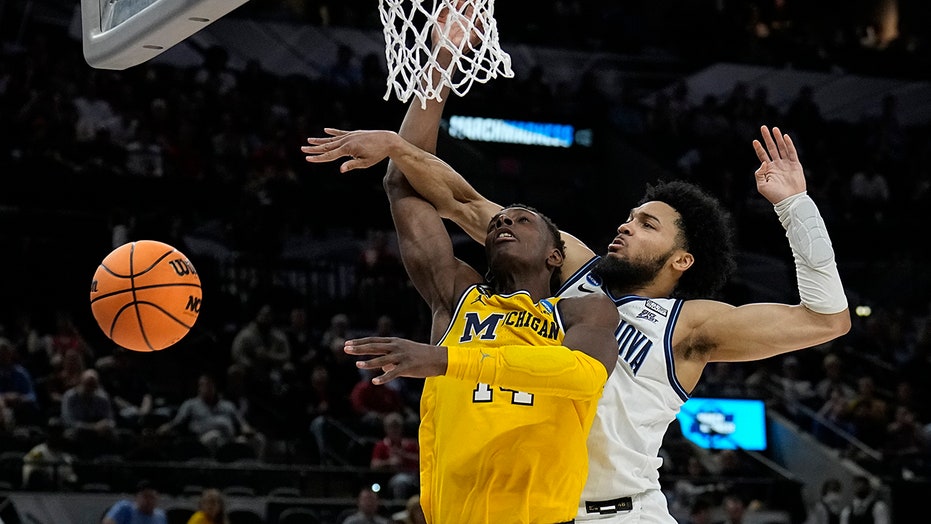 The Villanova Wildcats have made quite a second home for themselves in the Alamo City, where they won a national championship in 2018 and are carving a path toward another.

Jermaine Samuels scored 22 points, Collin Gillespie scored 12 and made a key 3-pointer late, and Villanova controlled Michigan in a 63-55 Sweet 16 victory on Thursday night in the NCAA Tournament.

Samuels and Gillespie were freshmen in that title run a few years ago. Now, they are grizzled veterans and long-time starters who are still around because of the extra season of eligibility due to the pandemic.

Villanova guard Caleb Daniels, right, fouls Michigan forward Moussa Diabate during the second half of a college basketball game in the Sweet 16 round of the NCAA tournament on Thursday, March 24, 2022, in San Antonio. (AP Photo/Eric Gay)

They're also the driving force for second-seeded Villanova (28-7), which advanced to the South Region final. They'll play No. 5 seed Houston (32-5), which beat top seed Arizona 72-60. It’s the deepest run in the tournament for Villanova since coach Jay Wright won the second of his two national titles in 2018 — against Michigan.

Samuels' 8-of-13 shooting performance, much of it coming on tough drives through Michigan defenders and around Wolverines 7-foot-1 center Hunter Dickinson, carried a Wildcats offense that had long stretches of misfiring on 3-pointers.

Samuels battled Dickinson on both ends of the court, and challenged the big man every time he had the ball to divert shots or force outlet passes.

"I just wanted to stay mobile and move," Samuels said. "He’s a phenomenal player, so he’s going to get great looks at the basket. But that I have teammates behind me gave me all the confidence I needed."

The loss ends a turbulent season for the Wolverines (19-15) and coach Juwan Howard, whose team squeaked into the tournament field only to shine in the first two rounds. Howard was suspended for five games late in the season for hitting a Wisconsin assistant during a postgame handshake line.

"We learned a lot (about) who we are," Howard said. "We always talk about Michigan being a family. We’ve been the most connected group this year because of the fact everyone has been supporting each other. When I walk away from this season, and I look back, there’s no reason not to hold your head up high."

Villanova guard Collin Gillespie shoots over Michigan forward Brandon Johns Jr. during the second half of a college basketball game in the Sweet 16 round of the NCAA tournament on Thursday, March 24, 2022, in San Antonio. (AP Photo/Eric Gay)

Villanova twice threatened to pull away in the second half, but the Wolverines matched Nova's 3-point shooting in spurts to hang around. Guard Eli Brooks kept rescuing Michigan with 3-pointers, making 3 of 5. One of Brooks' 3s, plus two free throws from Terrance Williams II, had the Wolverines within 54-50 with just over 3 minutes left.

Michigan had plenty of tournament experience to lean on. They had fought back from halftime deficits against Colorado State and Tennessee to make the Sweet 16 for the fifth consecutive year.

But after Dickinson, who led the Wolverines with 15 points and 15 rebounds, missed near the basket, Samuels blew by him on the other end for a layup. Gillespie followed it with a 3-pointer — his fourth of the game— from the left wing to make it 59-50 with 1:52 to play.

That was the cushion the Wildcats needed, as Michigan closed within six points before Samuels made four three throws over the final 13 seconds to put it away.

Defensively, Villanova refused to yield space under the basket to Michigan's big man, who came in averaging 24 points in Michigan's two NCAA Tournament wins. Dickinson was 6 of 16 shooting.

Villanova forward Jermaine Samuels shoots over Michigan center Hunter Dickinson during the first half of a college basketball game in the Sweet 16 round of the NCAA tournament on Thursday, March 24, 2022, in San Antonio. (AP Photo/David J. Phillip)

"We asked a lot of (Samuels) him on the defensive end guarding Dickinson a lot. And then on the offensive end, we’re trying to move Dickinson around," Wright said. "Which it sounds good unless you’re guy that’s got to go. You’re running around, setting screens, cutting to make him follow you ... He never wanted to come out."

Michigan: Guard DeVante' Jones was back in the starting lineup. He missed the Wolverines' first-round game against Colorado State because of concussion protocols, and was held out of the second half of the second-round win over Tennessee when his symptoms returned. He scored seven and had five rebounds against Villanova, also left the game briefly in the second half when he fell hard to the floor chasing a loose ball.

Villanova: The Wildcats have been launching 3-pointers all season and there was nothing to deter them when they weren't falling against the Wolverines. The Wildcats were 9 of 30 from long range — their ninth game this season with at least 30 attempts. The most was 50 in a win over Syracuse.

Before the game, Villanova announced freshman guard Jordan Longino’s season was done. He needs arthroscopic surgery to repair a torn meniscus in his left knee. He was hurt in practice on March 16 and didn’t play in the tourney. longino played in 26 games this season, averaging 8.8 minutes and 1.8 points.

"We’re all crushed for Jordan that this injury has prevented him from playing in the NCAA Tournament," Wright said.

Villanova will face a Houston team backed by a big crowd, since San Antonio is just a three-hour drive from the Cougars' home city. Villanova and Houston haven't met since the 1991-1992 season.