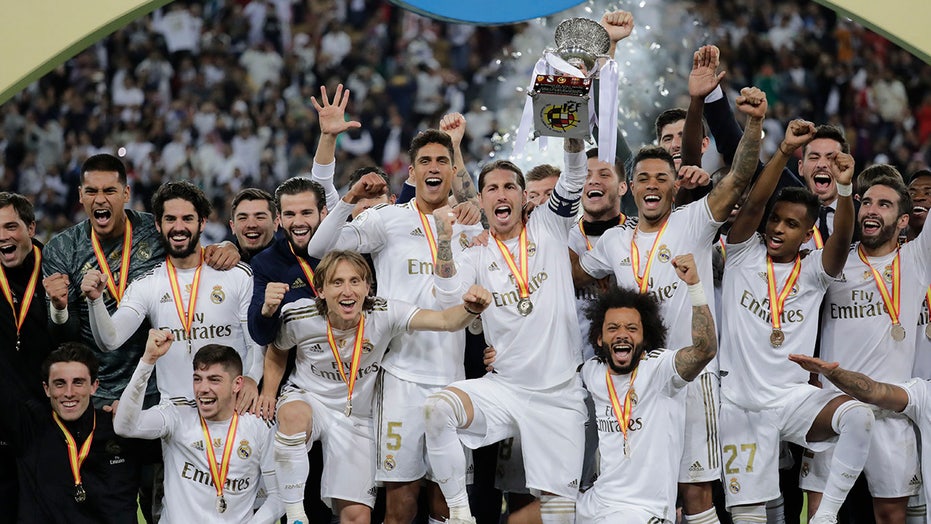 Real Madrid beat Atlético Madrid in a penalty shootout on Sunday to win the first edition of the new-look Spanish Super Cup that was held in Saudi Arabia despite criticism from human rights groups.

Madrid won the shootout 4-1 after the final ended 0-0 after extra time. Dani Carvajal, Rodrygo, Luka Modric and Sergio Ramos all converted their spot kicks for Madrid.

“I had studied their penalty-takers before,” Courtois said. “I knew where Thomas was going to shoot. It was a good save because he struck it hard.”

Madrid played the final five minutes of added time with 10 men after Federico Valverde was shown a direct red for fouling Álvaro Morata when he had only Courtois to beat.

“The most important play was the one by Valverde, who stopped us from having a chance that could have decided the match,” Atlético coach Diego Simeone said. “He won the match.”

Zinedine Zidane added to his impressive statistic of having led Madrid to victory in all nine finals he has coached. Those include three Champions League finals.

“As a player it was the same, I gave it all on the pitch and I had my rewards. And the same thing is happening as a coach,” Zidane said. “Above all I want to congratulate my players. We believed in the win until the very end.”

The Spanish soccer federation’s deal to play in Saudi Arabia was reportedly worth 120 million euros ($134 million) with the competition expanded to four teams instead of two and moved from the start of the season to its midpoint. The federation said the agreement will help Spain in its attempt to host the 2030 World Cup in a joint bid with Portugal.

The federation was not deterred by criticism from human rights activists and the recommendation of UEFA President Aleksander Ceferin for European soccer teams not to play in countries "where the basic rights of women are not respected.”

Federation president Luis Rubiales has tried to deflect the criticism by highlighting that opening the games to women spectators was part of the deal to play the matches in the energy-rich Middle Eastern kingdom.

Amnesty International organized a small peaceful protest in front of the Saudi embassy in Madrid on Wednesday to call for the release of women activists who have been fighting for their rights in Saudi Arabia.

Moving the competition abroad at first seemed to dim interest in the minor trophy in Spain, but the semifinals produced two exciting contests. Madrid beat Valencia 3-1 while Atlético rallied past Barcelona 3-2.

But the final was much less exciting.

Zidane was without the injured Karim Benzema, Gareth Bale and Eden Hazard. He repeated the successful experiment against Valencia of a line-up loaded with five midfielders behind the little-used striker Luka Jovic.

Atlético made the better start. Its pressure led to a bad pass by Ramos that went directly to Félix alone near the edge of the area, only for the young forward to send his shot wide.

Madrid could only count on a long shot by Casemiro that goalkeeper Jan Oblak had no trouble grabbing in the fifth until it settled down. Both defenses dictated the rest of the first half.

Modric went close to setting up Jovic in the 51st, but his shot missed the upright by inches. Valverde had a horrible miss in the 67th after a deflected cross reached him in the goalmouth, heading the ball off his own leg and out.

Defenders struggled at the end and both goalkeepers had to turn back several shots.

The key moment to the unattractive contest was an ugly tackle from Valverde to cut down Morata as he was charging toward Courtois, triggering a brief tussle between the teams' players.

Valverde said that he was not proud of the foul that helped his teammates reach the shootout where their finishing touches from the spot made all the difference.

“I asked Morata to forgive me,” Valverde said. “I know it isn't right what I did, but I had to do it. I am happy for the title, but I don’t feel great about it."