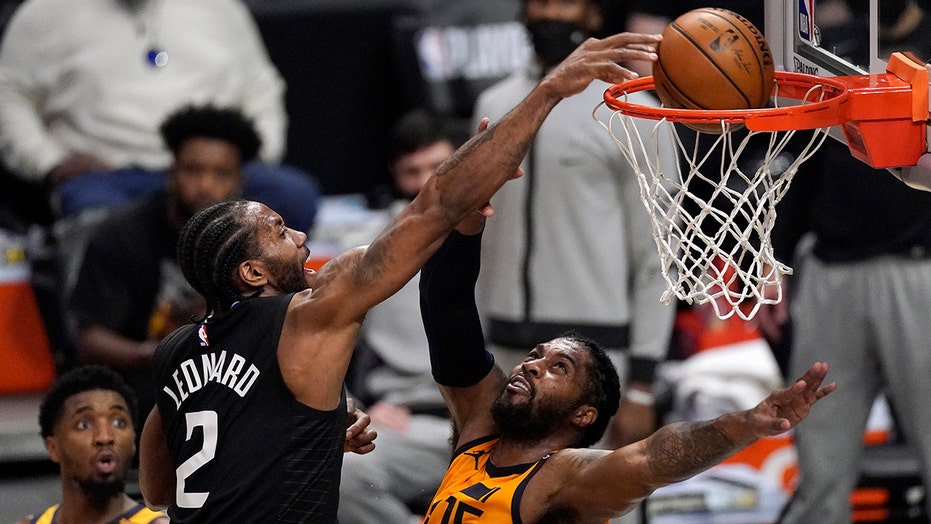 Kawhi Leonard and Paul George know it takes the two of them to make things go right if the Los Angeles Clippers are going to advance beyond the second round of the NBA playoffs for the first time. Both responded again on Monday night.

Leonard and George each scored 31 points Monday night to propel the Clippers to a 118-104 victory over the Utah Jazz and even their Western Conference second-round series at two games apiece.

"Myself and Kawhi got full trust in each other," said George, who was playing in his 100th career postseason game. "It’s opportunities for us to score when we get switches, but then there’s opportunities to allow our teammates to be aggressive and make plays for them when we can attack our mismatches. I think it’s just a healthy mix."

Leonard and George also became fifth duo since the merger with 30 points each in back-to-back playoff games.

"These guys understand that we need them to be the head of the snake and be super aggressive," said Marcus Morris Sr., who had 24 points and was 5 of 6 on 3-pointers. "Those guys are our leaders. We go as they go and they understand that. Guys have just been picking up the slack behind them."

In a game that Los Angeles dominated all night, Leonard provided the highlight with his dunk late in the first half. He got the ball just beyond the 3-point line, drove past Royce O’Neale in the lane and then slammed it over Derrick Favors to give the Clippers a 62-38 lead with 1:24 remaining in the second quarter.

The dunk quickly went viral on social media and even caused Philadelphia star Joel Embiid to pause in the middle of his postgame remarks after the 76ers lost to the Atlanta Hawks.

"I'm sure you saw that, but that Kawhi dunk was crazy," Embiid said before going to back to discuss his team's loss.

"In that game and the heat of the moment, have to have that mentality," Leonard said of his dunk. "After that though (Joe) Ingles hit a wide open 3, so we still have room for improvement."

Utah won the tip and scored on Bogdanovic’s dunk before the Clippers scored the next 10 points and never looked back as Leonard had five points during the early run.

LA’s largest lead in the first quarter was 19 as it was 6 of 12 on 3-pointers and forced six Utah turnovers. The Jazz trailed 30-13 at the end of the first quarter as they were 6 of 21 from the floor and didn't make their first 3-pointer until 1:34 remaining.

"I thought it was our defense where we set the tone. We were able to get out in transition," Clippers coach Tyronn Lue said.

Donovan Mitchell led Utah with 37 points, making him the first player since Golden State’s Stephen Curry in 2019 to have six straight 30-point games in the playoffs.

Ingles added 19 and Bojan Bogdanovic 18 for the top-seeded Jazz, who have lost back-to-back playoff games for the first time this year.

"I think we shot ourselves in the foot a few times with the turnovers. And that’s really what kind of played into their taking advantage," Mitchell said. "When you allow a team to get out in transition, get going early, it’s tough to come back after that."

Morris hit a pair of free throws with 5:21 remaining to put the Clippers up 51-22, which was their largest lead of the night. They had a 24-point advantage at halftime (68-44), which is tied for their second biggest in postseason franchise history.

"We were playing hard. We were competing. We weren’t playing smart in that we weren’t connected," Utah coach Quin Snyder said. "We weren’t putting ourselves in situations where we could have success, I think."

Leonard and George have each scored at least 20 points in all 11 games this postseason. They are just the third duo in NBA history to do that in a team’s first 11 playoff games and the first since Shaquille O’Neal and Kobe Bryant with the Lakers in 2003.

Jerry West, who watched Monday’s game from courtside, and Elgin Baylor were the other duo with the 1962 Lakers.

Jazz: NBA Defensive Player of the Year Rudy Gobert was in foul trouble most of the night and finished with 11 points. ... Jordan Clarkson was only 3 of 12 from the field and 2 of 8 on 3-pointers after averaging 5.3 made from beyond the arc in the first three games. ... G Mike Conley remained out due to a right hamstring strain. Snyder did not have an updated timetable on when Conley could return.

Clippers: Morris Sr. is 16 of 27 (59.3%) on 3-pointers during LA's six postseason victories but is 7 of 33 (21.2%) in the five losses. ... Patrick Beverley had a postseason career-high four blocks. ... G Rajon Rondo was inactive due to right knee soreness. Lue said before the game that he planned to stick with a nine-player rotation moving forward.