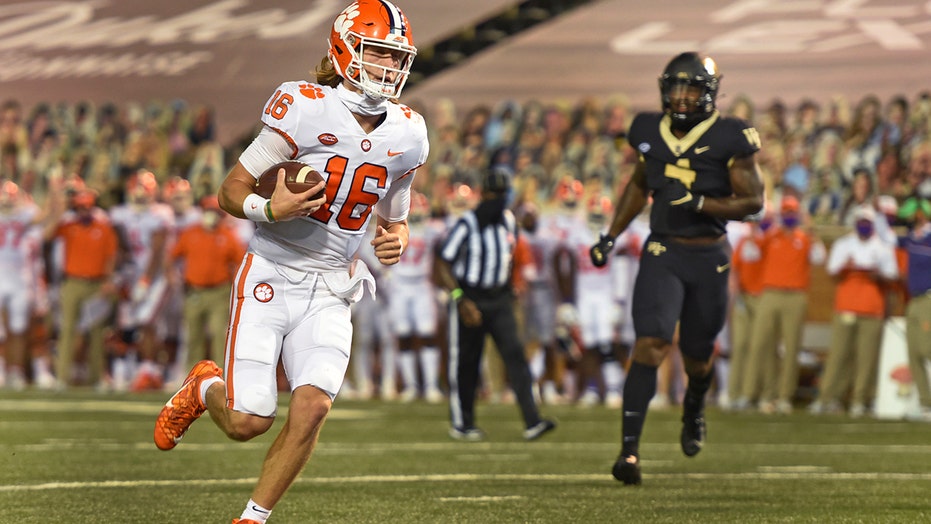 Clemson quarterback Trevor Lawrence said he's worked this offseason on being patient and taking what the defense is giving him instead of looking for the big play.

It paid off Saturday night.

Lawrence completed 22 of 28 passes for 351 yards and combined for three touchdowns, and the No. 1 Tigers continued their domination of Wake Forest with a 37-13 victory in the season opener for both teams.

“Don’t try to do do much,” Lawrence said. “Just trust it and go through my progressions.”

Travis Etienne ran for 102 yards and a touchdown for Clemson, which improved to 70-5 since the start of the 2015 season under coach Dabo Swinney.

“I knew it was probably going to get a little sloppy, but that’s going to make our team better. But Trevor was amazing. He really was," Swinney said.

The Heisman Trophy hopeful looked in solid form against the Demon Deacons.

After going three-and-out with a bad 16-yard sack on the first drive, Clemson scored on its next three possessions, including a pair of short walk-in touchdowns by Lawrence to take a 17-0 lead. On both occasions, the Demon Deacons sold out on the fake handoff to Etienne, allowing Lawrence a free path to the end zone.

"As he’s gotten stronger it has come a little easier for him,” Clemson offensive coordinator Tony Elliott said. “He has the best contact balance of any guy I've ever coached.”

Lawrence completed 22 of 28 passes and spread the ball around to eight different receivers in the first half alone as Clemson took a 27-0 lead.

Wake Forest quarterback Sam Hartman was 11 of 21 for 182 yards passing and was sacked four times before being replaced in the fourth quarter. Taylor Morin was a bright spot for Wake Forest, finishing with nine catches for 93 yards and a touchdown.

“They came out strong like they always do and they played better than us tonight,” Wake Forest coach Dave Clawson said. “That quarterback and that tailback are special players. Disappointed with the result, but I think there are a lot of positives to build on.”

The game was played in front a near empty stadium, with the exception of about 50 family members of Demon Deacon upperclassmen to comply with North Carolina state COVID-19 rules.

Wake Forest’s school’s band and cheerleaders were stationed on the side hill behind one of the end zones, socially distanced from each other. Wake Forest showed its fans cheering virtually on the scoreboard while ambient crowd noise was pumped in.

“It was a little weird but we're just so happy to be playing,” Lawrence said. “We were just excited to play especially because it was up in the air on whether we were going to play.”

Wake Forest: The Demon Deacons really struggled with tackling. Clawson didn’t begin full-contact practices until about three weeks ago because he didn't feel good about risking players' health until he was sure there'd be a season. It's not easy to tackle Etienne anyway, but Wake Forest will need to do a better job of wrapping up.

Clemson: The Tigers lost Tee Higgins to the NFL draft and Justyn Ross to a season-ending injury, but their new wave of receivers appears decently talented. It's still unclear who'll emerge as the leader of this group. Amari Rodgers led the way against Wake Forest with five catches for 90 yards, but dropped a wide open pass in the back of the end zone before colliding with the goalpost. “I think he took his eyes off the ball at the last second,” Elliott said.

Former Wake Forest star and current NBA player Chris Paul was guest picker on ESPN's College GameDay and chose his Demon Deacons to win. He didn't get that one right, but did predict Lafayette upsetting No. 23 Iowa State.

The Tigers looked very much like the No. 1 team in the country.

Clemson: Hosts The Citadel on Saturday in home opener.