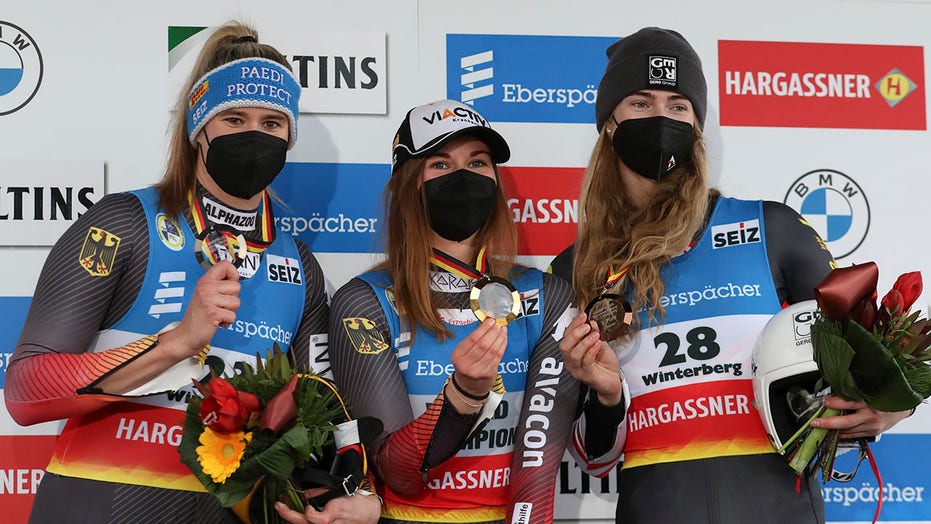 Latvia won gold in a World Cup luge team relay on Sunday, with Austria second and the U.S. grabbing third.

The Americans — Summer Britcher, Tucker West and the doubles team of Chris Mazdzer and Jayson Terdiman — got the bronze in 2:24.802. Germany, on home ice, managed only fourth in 2:24.955.

It was the second team relay medal of the season for USA Luge, which grabbed silver in the season-opening relay on the new track in Yanqing, China, that will be used for the Beijing Olympics next month.

Germany found the top of the podium in the women’s race earlier Sunday, with Julia Taubitz (1:53.167) rallying to overtake fellow German slider Natalie Geisenberger (1:53.408) in the second heat to claim the gold.

Egle was third for Austria. Taubitz moved 102 points ahead of Egle in the women’s overall World Cup standings with five races remaining; the margin between the two had been 72 entering Sunday.

Britcher was fifth in the women’s race, good enough to ensure that she will be selected for the U.S. Olympic team. When officially selected — USA Luge will nominate its full team later this month — Britcher will become a three-time Olympian.

Brittney Arndt was 12th and Ashley Farquharson 16th for the U.S. women. Emily Sweeney did not finish for the Americans, crashing out in her second heat after posting some of the fastest split times of anyone in the race.

The World Cup luge series moves to Sigulda, Latvia, next weekend. It will be the final weekend of racing before the Americans announce their Olympic roster.