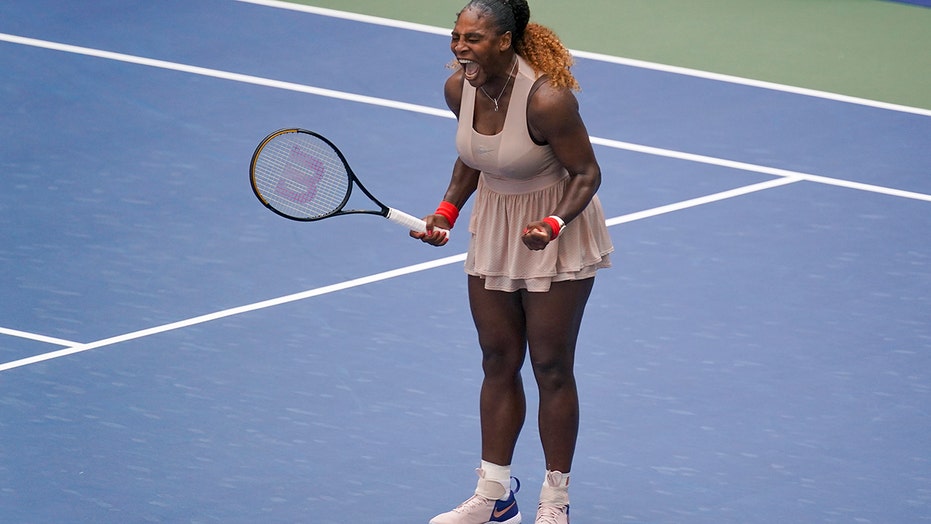 Her breathing loud enough to hear in an empty Arthur Ashe Stadium, her third-set deficit a point from growing to 3-1 against someone who beat her less than two weeks earlier, Serena Williams scrambled to extend a 13-stroke exchange until her opponent netted a forehand.

Locked in a tough fourth-round match Monday, and without the benefit of a pro-American audience, Williams provided her own encouragement along the way to coming back and beating 15th-seeded Maria Sakkari of Greece 6-3, 6-7 (6), 6-3, reaching the quarterfinals in a 12th consecutive appearance at Flushing Meadows.

“I feel like I’m pretty vocal with or without a crowd. ... I’m super passionate. This is my job. This is what I wake up to do. This is what I train to do, 365 days of the year,” said Williams, who moved a step closer to a record-tying 24th Grand Slam title.

“Yeah, I’m always going to bring that fire and that passion,” she continued, “and that ‘Serena’ to the court.”

When the match ended, after Williams collected six of the last seven games, she turned and yelled toward her husband, who stood at his front-row seat and yelled right back.

How tight was this contest? Sakkari produced more aces than Williams, 13-12, and more total winners, 35-30.

Williams was two points from victory at 6-all in the second-set tiebreaker, but faltered there, sending a backhand return long to give Sakkari her fifth set point, then pushing a forehand out.

But as is so often the case, when the outcome was hanging in the balance in the third set, which Sakkari led 2-0 but couldn't quite get to 3-1, Williams was better down the stretch, when it mattered the most.

“I have to be deadly honest: I wasn't brave enough in the third set. I kind of like, not choked, but didn't (convert) my chances," Sakkari said. “And if you don't get your chances with a good Serena against you, it’s done.”

This was a rematch from Aug. 25, when Williams faded after building a lead and lost in three sets to Sakkari at the Western & Southern Open, a hard-court tournament usually held in Ohio but moved to the U.S. Open site as part of a two-tournament “controlled environment” without spectators amid the coronavirus pandemic.

In the earlier one, Williams’ legs were cramping by the end, and she blamed herself for that situation, memorably declaring: “I put myself in a bad situation. It’s like dating a guy that you know sucks.”

Asked about that line Monday, Williams joked: “Thank God, I got rid of that guy. Never want to see him again. He was the worst.”

That setback made the American 3-2 since tennis returned from its COVID-19 hiatus, all three-setters. And since? She is 4-0 at the U.S. Open.

Williams, who turns 39 in less than three weeks, will face unseeded Tsvetana Pironkova for a semifinal berth.

Playing in her first tournament in more than three years after taking time off to have a child, the 32-year-old Pironkova advanced with a 6-4, 7-6 (5), 6-3 victory over Alize Cornet.

No. 16 seed Elise Mertens knocked off second-seeded Sofia Kenin 6-3, 6-3 to reach the quarterfinals of the tournament for the second year in a row and deny the American a chance for back-to-back Grand Slam titles.

Kenin won the Australian Open and was trying to become the first with two straight Grand Slam titles since Naomi Osaka won the 2018 U.S. Open and the 2019 Australian Open.

Mertens will face Victoria Azarenka, who beat No. 20 Karolina Muchova 5-7, 6-1, 6-4 for her ninth straight win. Azarenka won the Western & Southern Open that was played in New York as an in-the-bubble warm-up for the U.S. Open.

In men's action, where Novak Djokovic's default on Sunday left zero past Grand Slam champions in the bracket, No. 2 seed Dominic Thiem moved into the quarterfinals by claiming a close first set and then running away with a 7-6 (4), 6-1, 6-1 win against No. 15 Felix Auger-Aliassime.

With the 30-year-old Pospisil gone, this will be the first U.S. Open since 2010 without at least one male quarterfinalist who is beyond his 20s.

Williams first won the title in New York all the way back in 1999 as a teenager and now has six trophies from here. In her most recent 11 trips to Flushing Meadows, Williams has four championships, three runner-up finishes and three semifinal losses.

She lost in the final in both 2018 and 2019, part of a stretch in which she has been to the title match at four of the past seven Grand Slam tournaments, falling just short of getting that elusive 24th, which would tie her with Margaret Court for the most in tennis history.

Unlike Court's, all of Williams’ major championships have come in the professional era.

“I always compete,” Williams said when asked what about her work in this tournament has pleased her the most so far, “but competing and having a good attitude, I think, is what I’m most satisfied about.”