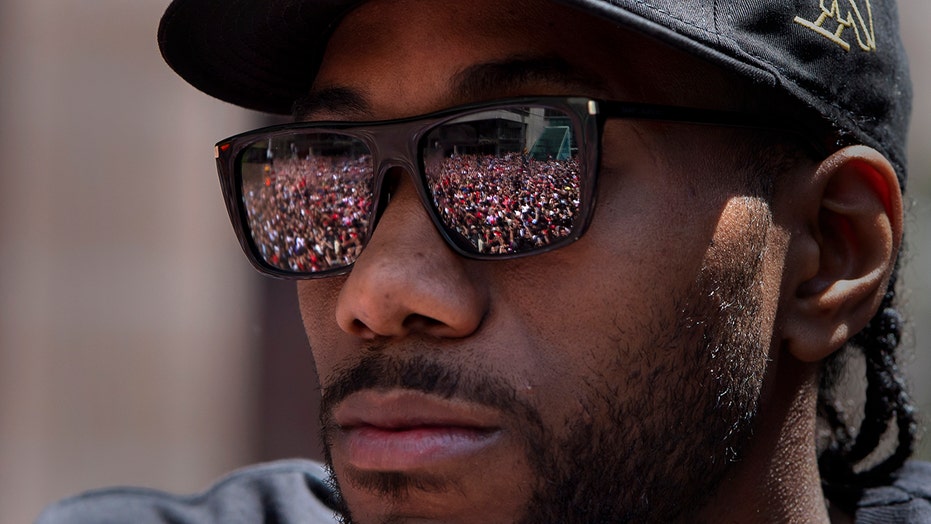 Kawhi Leonard is going to be one of the most sought-after free agents to hit the market.

Leonard is coming off a season where he was traded to the Toronto Raptors from the San Antonio Spurs and helped guide his new team to their first NBA championship in franchise history.

Leonard is expected to become a free agent once the period opens and is going to draw interest from some of the top teams in the league.

He is going to demand a max contract -- at the most.

Here are five teams that could sign Leonard once free agency begins on June 30.

Could Leonard re-sign with the Raptors? (Frank Gunn/The Canadian Press via AP)

Leonard helped lead the Raptors to their first title. He was cheered and applauded at the team's championship parade celebration. His teammate and the fans chanted "five more years" at him when he was on the team's bus making his way through Toronto. He also took in a Toronto Blue Jays game and received a standing ovation there. It should be noted that he could wind up back with the Raptors by the time free agency is over.

The Lakers could be the most attractive destination. (AP Photo/Ben Margot)

With the Lakers agreeing to a trade to acquire Anthony Davis to pair him with LeBron James, it makes the franchise a more attractive landscape than it was during the season and during the playoffs. The only issue is that the Lakers would have to clear the cap space to be able to offer anything close to what opponents could offer Leonard. So far, the Lakers have seemed unable to do so.

The NBA Finals MVP had been linked to the Clippers over the last year. (AP Photo/Morry Gash)

The Clippers are the betting favorite to land Leonard. The NBA Finals MVP has been rumored to be wanting to go to the Clippers since he even stepped on the court in a Raptors jersey. According to ESPN, the Clippers and Raptors are the top two contenders to land him in free agency and though other teams lurk in the distance it's been assured that the final battle for the ex-Spurs star will be between those two teams.

The Sixers have a young core in place. (Nathan Denette/The Canadian Press via AP)

ESPN also named the 76ers among the top contenders to swoop in and woo Leonard over. The 76ers obviously have a young core with Ben Simmons and Joel Embiid and adding Leonard would be a huge move in an Eastern Conference that seems to get more competitive each season. Leonard could be the one to shine with the 76ers.

The Knicks are going to have to make a splash somehow. Whether it's trying to get into the room with Leonard or one of the other top free agents itching to hit the market, New York will be looking to add that missing piece in hopes to pair it with its budding, young stars in R.J. Barrett and Kevin Knox. Leonard in the Big Apple would bring big things to Manhattan.