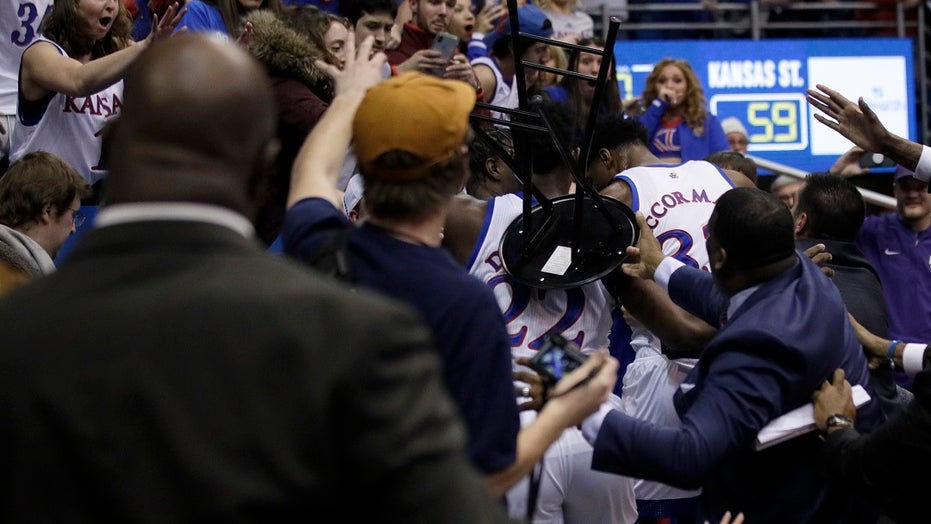 A violent brawl broke out between in-state rivals Kansas and Kansas State toward the end of their game Tuesday -- a fight seemingly sparked by a late block.

Players from both teams threw punches as onlookers at Allen Fieldhouse looked in amazement following the Jayhawks 81-59 win.

The chaos started when Kansas State guard DaJuan Gordon was blocked and Kansas forward Silvio De Sousa stood over him barking. Players from both benches ran onto the floor as the clock ran out.

Seconds earlier, De Sousa was stripped by Gordon near midcourt and Gordon tried to go in for a layup when his shot was rejected. De Sousa confidently walked over to Gordon and stood over him as he lay on the floor, triggering the benches to clear.

At one point, De Sousa picked up a stool and held it above his head, looking like he was about to swing it at a Kansas State player before assistant coach Jerrance Howard grabbed it from him.

Both coaching staffs and arena security separated the teams. In a bizarre finish, the officials summoned the players back from their locker rooms and put one-tenth of a second back on the clock as Kansas State shot free throws to a chorus of boos from the few thousand fans still in the arena.

With the win, the Jayhawks avoided back-to-back defeats at home, which would have been a first since the 1988-89 season.

It was unclear of Tuesday's incident will lead to suspensions. Both teams are in the Big 12 conference.