Amnesty grants its highest honor each year to a person or organization, “dedicated to fighting injustice and using their talents to inspire others.”

In his acceptance speech at the ceremony in Amsterdam, Kaepernick -- who has been criticized by President Donald Trump, members of the U.S. military and many NFL fans for staging his protests during the playing of the national anthem before games -- described police killings of African-Americans and Latinos in the U.S. as “lawful lynchings.”

“Racialized oppression and dehumanization is woven into the very fabric of our nation — the effects of which can be seen in the lawful lynching of black and brown people by the police, and the mass incarceration of black and brown lives in the prison industrial complex,” Kaepernick said.

He also defended his decision to stage his protests during the playing of the national anthem.

“How can you stand for the national anthem of a nation that preaches and propagates, ‘freedom and justice for all,’ that is so unjust to so many of the people living there?” he said in the Dutch capital.

“How can you stand for the national anthem of a nation that preaches and propagates, ‘freedom and justice for all,’ that is so unjust to so many of the people living there?”

Since parting ways with the San Francisco 49ers after the 2016 NFL season, Kaepernick, 30, has been unable to reach a contract deal with another NFL club. He missed the entire 2017 NFL season.

Since then, other NFL players, as well as athletes in other sports, have replicated Kaepernick's protest, in part because they believe the quarterback has been blackballed by the NFL.

Those protests drew the ire of President Trump, who called on team owners to fire such players.

“Can you believe that the disrespect for our Country, our Flag, our Anthem continues without penalty to the players,” Trump tweeted last November. “The Commissioner has lost control of the hemorrhaging league. Players are the boss!”

A recent negotiation between Kaepernick and the Seattle Seahawks fell through, reportedly because Kaepernick would not agree to end his protest, Fox News reported.

But in response to the player demonstrations, the NFL agreed to commit $90 million over the next seven years to social justice causes.

Amnesty International Secretary General Salil Shetty called Kaepernick “an athlete who is now widely recognized for his activism because of his refusal to ignore or accept racial discrimination.”

In his remarks, Kaepernick also cited Malcolm X’s words of willingness to “join in with anyone – I don’t care what color you are – as long as you want to change this miserable condition that exists on this earth,” the Washington Post reported.

“In truth, this is an award that I share with all of the countless people throughout the world combating the human rights violations of police officers, and their uses of oppressive and excessive force,” Kaepernick said.

"This is an award that I share with all of the countless people throughout the world combating the human rights violations of police officers, and their uses of oppressive and excessive force.”

Eric Reid, a 49ers teammate who protested alongside Kaepernick, presented the Amnesty award to him Saturday night.

Reid, a safety who also is now a free agent, continued Kaepernick’s protests by kneeling during the anthem last season.

Kaepernick paid tribute to his friend for his own role in the protest movement. 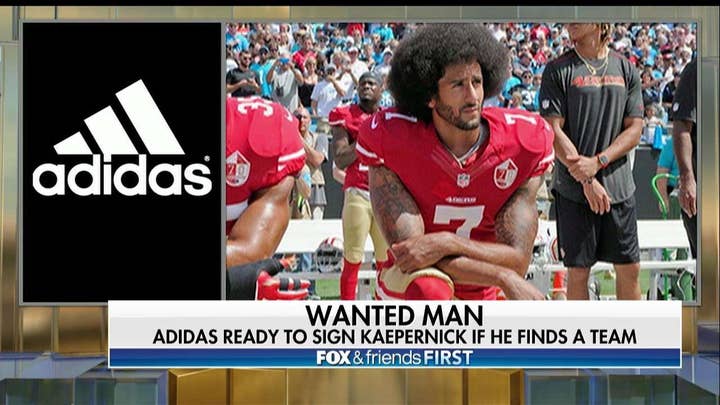 “Eric introducing me for this prestigious award brings me great joy,” Kaepernick said. “But I am also pained by the fact that his taking a knee, and demonstrating courage to protect the rights of black and brown people in America, has also led to his ostracization from the NFL when he is widely recognized as one of the best competitors in the game and in the prime of his career.”

Reid has said he will take a different approach in 2018.

Previous recipients of the Amnesty award have included anti-apartheid campaigner and South African President Nelson Mandela and Malala Yousafzai, the Pakistani schoolgirl who campaigned for girls’ right to education even after being shot by Taliban militants.