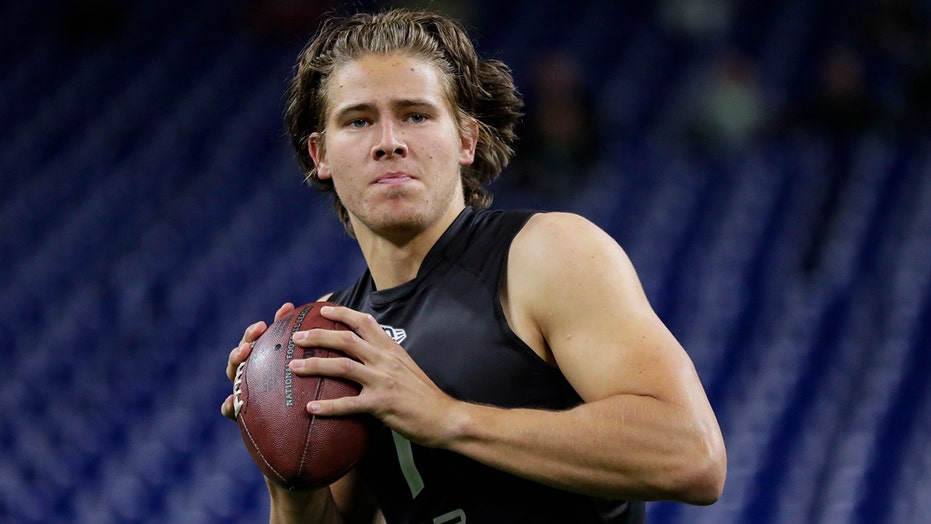 Like every other NFL draft prospect, Oregon QB Justin Herbert found himself scrambling when the coronavirus outbreak forced school closures and stay-at-home restrictions across the country.

In his garage a mile from Autzen Stadium, where the Eugene native set passing records for the Ducks, Herbert has continued his daily weightlifting regimen along with hour-long throwing sessions a few blocks up the road.

All thanks to his two brothers who are living at home with him and serving as his spotters and route runners.

Mitchell, 23, played wide receiver at Montana State and Patrick 19, was a redshirt freshman tight end with the Ducks last season.

“It’s definitely been a tough situation with the virus and everything that’s going on and we’re doing our best to stay safe and stay inside,” Herbert said Wednesday.

“Fortunately, I’ve got two brothers who have been able to catch passes from me. There’s a big field up by my house and we’re able to walk up there and go throw."

Expected to be a top-five pick, Herbert said the unusual circumstances haven’t tapered his preparation for the NFL.

“It’s been great to be with my family and with my brothers, to be able to share these past couple of months with them,” Herbert said. “It’s been a lot of fun and fortunately we’ve gotten a lot of work in and we’ve been able to do everything we’ve needed to.”

Herbert figures he’ll be going through the same daily workout routine for a while longer because NFL teams are prohibited from gathering or practicing together during the pandemic. So, rookies will have to study remotely, like the millions of students who are now learning online.

“I think Oregon’s got some plans to maybe start opening late May, early June,” Herbert said. “But for the time being, that’s probably how I’ll have to get my work in. I think for the foreseeable future, I’ll have to be doing that.”

Herbert’s routine has brought a sense of normalcy to an unusual lead-up to the draft, which will be conducted via video conferencing instead of in Las Vegas as originally planned.

“I would say maybe the cameras in my living room right now are probably pretty strange,” Herbert said. “Because we’re not having it in Vegas, we’re having it in my house. And we’ve had to set that up. My brother was in charge of that. So, it’s been a little strange, but we’re getting used to it.”

Herbert is one of the top quarterbacks in the draft, while LSU QB and Heisman Trophy winner Joe Burrow is the consensus No. 1 pick.

Herbert could have turned pro a year ago but decided to return for his senior season.

“I wanted to become a better quarterback, better leader, better friend,” Herbert said. “There’s so much that I can improve on and this year gave me that and I’m really glad I decided to come back.”

Herbert threw for 3,471 yards with 32 touchdowns and six interceptions in leading the Ducks (12-2) to a Pac-12 championship. He scored three rushing touchdowns in a win over Wisconsin in the Rose Bowl and was the MVP of the Senior Bowl.

“No regrets at all. I’m 100 percent sure that I made the right decision and if I were given that decision again, I’d make the same one,” Herbert said.

Herbert said he kept an eye on NFL free agency with so many quarterbacks on the move or still job hunting.

“Free agency has always been something that I’ve watched just because I’m a fan of football,” Herbert said. “But with the draft and everything, I really don’t have any control over where I’m going, so I can’t get too involved with it. And whatever happens happens; I’m going to make the best of wherever I go.”

The NFL is conducting the draft remotely, so rather than the glitz and glamour of Las Vegas, Herbert will participate in a virtual red carpet on Thursday afternoon on behalf of Head & Shoulders and then hunker down at home awaiting that big phone call.

“We’ve actually been instructed to keep it to close family, so we’ll have my brothers, my two parents, that’ll be about it,” Herbert said.

“I’m thrilled. I’ve been waiting for this moment for a long time and to be able to share it with my family, it doesn’t get much better than that.”