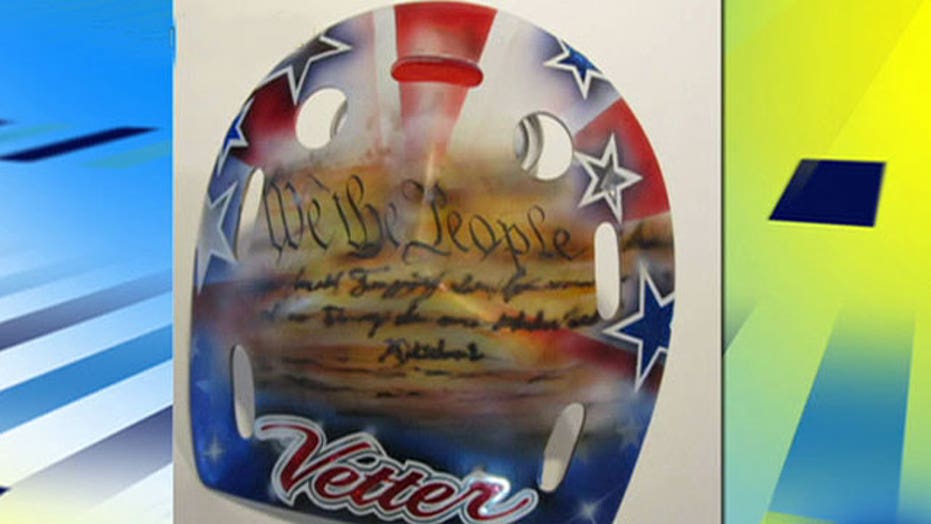 When Team USA women’s hockey goalie Jessie Vetter takes to the ice next month at the 2014 Winter Olympics in Sochi, her mask will be missing something.

The International Olympic Committee, citing regulation, has required the 28-year-old goalie to remove an inscription bearing “We the People” on a custom mask made for her.

The mask’s artist, Ron Slater, told FoxNews.com that he believes the IOC sees it as “propaganda” promoting the United States over other countries – anathema to an event in which all athletes are regarded equally.

“It ruffles the wrong feathers, I guess,” said Slater, who also paints custom masks for NHL players. He said he and Vetter designed the mask – which was allowed to retain depictions of the Statue of Liberty, a screaming bald eagle and a “USA” shield – to show “figures that scream ‘America.’”

That’s when Vetter suggested they include the Constitution.

“How about ‘We the People’?” Slater recalls discussing with her. “It’s only three words. How much damage could they do?”

A FoxNews.com request for comment left with the IOC was not immediately answered Thursday night. But Rob Koch, the communications director for USA Hockey, said the controversy is based on technical specifications and “has not been an issue for our players.”

"It is our understanding that this is not an issue about the patriotic nature of the image depicting the U.S Constitution," Koch said. "The adjustment was necessary because the image did not meet IOC guidelines. It contained wording, which is not allowed on uniforms for any sports at the Olympic games."

Vetter’s alterations -- she was also required to remove a depiction of the Olympic rings and a Wisconsin Badgers logo, a nod to the University of Wisconsin, her alma mater -- are not without precedent.

Four years ago, U.S. goalies Ryan Miller and Jonathan Quick had to change their masks. Miller had to remove the phrase “Miller Time,” and Quick had to drop the words “Support our troops.”