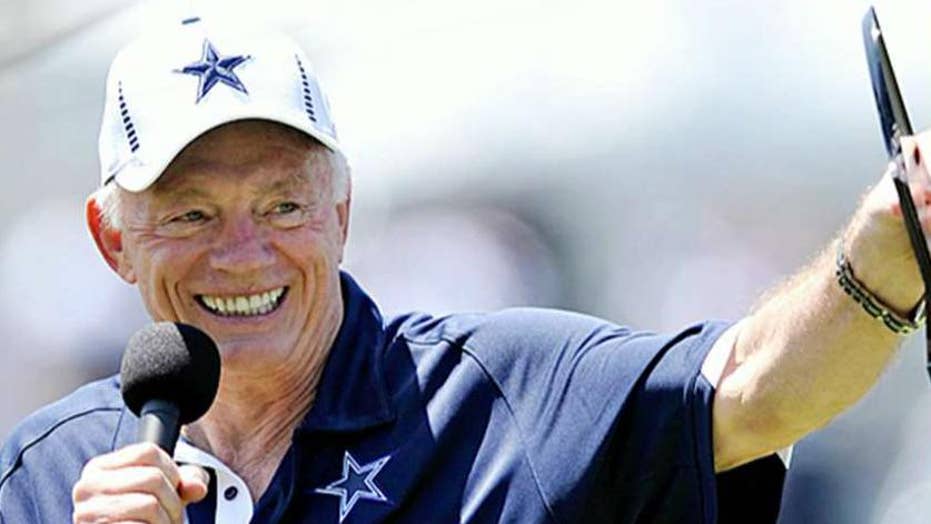 Jerry Jones is not backing down in his duel with NFL Commissioner Roger Goodell. Long after a Super Bowl winner is crowned, these two NFL heavyweights may still be going at it.

And the battle could get messy.

Jones, the fiery, outspoken owner of the Dallas Cowboys, has threatened to sue the NFL and several team owners if the league agrees to a new contract with Goodell, the buttoned-down, highly-criticized commish whose contract will expire in 2018.

The NFL said the issue is settled. The owners already voted in May -- unanimously -- to extend Goodell's contact. Jones, however, said circumstances have changed.

The personalities and management styles of the men couldn't be more different.

Jones, an Arkansas-native, played college football before striking it rich in the oil industry. He's taken an active role in building his team. But his vocal approach and rags-to-riches success story haven't made him popular with his fellow owners.

Goodell was a New Yorker, born to a U.S. Senator, Charles Ellsworth Goodell. The suave and polished Washington & Jefferson graduate started working in the NFL in 1982 and rose to become commissioner by 2006. During the 2013-2014 season, he reportedly earned $44 million.

Jones blames Goodell for the escalation of national anthem protests that have divided Americans and drawn the ire of the fan-in-chief: President Trump. Jones also said “behavior policies” have been an issue since May.

It doesn't help that total viewership of NFL games is down, with Sports Illustrated reporting an eight percent decrease during the season's first six weeks.

Some of that decline is believed due to the controversial player protests during the playing of "The Star-Spangled Banner." The demonstrations were sparked last season when former San Francisco 49ers quarterback Colin Kaepernick knelt during the national anthem to protest what he believed was a rise in police violence against minorities. While few players initially joined Kaepernick on one knee, the quarterback's absence from the league in 2017 has apparently inspired others to take up the cause, and each week dozens of players -- sometimes nearly entire teams -- have joined in.

The protests particularly escalated after President Trump said during a September campaign rally that players should be "fired" if they disrespect the flag. The Sunday after Trump made his remarks, Sept. 24, hundreds of players knelt together during the national anthem in a show of unity.

Even Jones participated -- but he knelt before the anthem played, standing up with the rest of the Dallas players when the music began.

Trump continued to criticize the NFL for its “lack of leadership,” and apparently the public agreed. Deadline reported last week’s “Monday Night Football” game viewership was nearly a season low.

But Goodell's response has been to downplay the situation or express his admiration of the NFL players who knelt to rebuke Trump.

“The way we reacted today, and this weekend, made me proud,” Goodell said after the league-wide display. “I’m proud of our league.”

The last straw for Jones seems to have come after his team’s star running back, Ezekiel Elliott, was suspended in August by Goodell.

Ezekiel Elliott gave up his legal fight and will begin serving his suspension. (AP)

The NFL investigated for a year claims Elliott assaulted his former girlfriend in the summer of 2016. Elliott denied the alleged physical altercations and said the ex-girlfriend, Tiffany Thompson, was only trying to exact revenge. Elliot was never charged by police. But the NFL, which has shown considerable muscle in regards to domestic allegations since fumbling its response to the Ray Rice incident, concluded there were three incidents over the course of five days.

Jones said his objection to Goodell getting a new contract was not specifically due to the Elliott situation; however, the timing of Jones' opposition coincided with a court ruling last week, after several appeals, Elliot would have to begin serving the six-week suspension.

"I've been dealing with this commissioner for almost 28 years as an employee of the NFL," Jones said. "Zeke's been involved here a year, year and a half. Those are really separate issues as to Zeke. The policy we have that has impacted Zeke is more of my issue with the commissioner."

Jerry Jones called it "laughable" that NFL owners would try to push him out of his ownership of the Cowboys. (AP)

If he continues his vocal critique of Goodell, Jones could face suspension, fines or the loss of draft picks. Some owners have even discussed a "nuclear option" -- pushing Jones out as an owner, Pro Football Talk reported.

"I've had not one inkling of communication from the league office or any owner that would suggest something that laughable, ridiculous, and that's about where that is," Jones told 105.3 The Fan.

But the saga has continued, and the NFL is accusing Jones of attempting to sabotage contract negotiations with Goodell, The Wall Street Journal reported Wednesday, citing a letter sent by the NFL to Jones.

In the document, the NFL said Jones’ “antics, whatever their motivations, are damaging the league.”

The letter, reportedly sent to all 32 NFL owners, also confirmed Jones had been booted as a non-voting member of the compensation committee due to his threats to sue.

NFL owners “said they were unhappy with Jones because he had circulated a three-month-old document with details of [salary and health benefit] requests from Goodell that Jones ‘personally knows to be an outdated historical artifact of no relevance whatsoever in the context of these lengthy negotiations,’” The New York Times reported.

Goodell, for his part, has had a less-than-sterling term as commissioner, often serving as a punching bag for fans and a useful foil for owners.

Ray Rice was captured on video knocking out his then-fiancee Janay Palmer. (Reuters)

Goodell was highly criticized for his reaction to Rice’s domestic violence case involving Rice's then-fiancee Janay Palmer in 2014. With only reports of the alleged assault leaking to the media, Goodell initially suspended the Baltimore Ravens running back for two games. But then a video of the assault was released showing Rice knocking Palmer unconscious in a hotel elevator with a single, vicious punch. Rice was then seen dragging Palmer’s unconscious body from the elevator.

The leak prompted Goodell to suspend Rice indefinitely and Rice hasn't played in the NFL since. Critics, however, bashed Goodell and the NFL’s handling of the case -- and other domestic violence cases. Some have argued Goodell and the NFL may have known the stomach-churning details of the Rice assault even before the horrific video was leaked, The New York Times reported.

“The NFL is absolutely its own worst enemy,” David Gregory, the executive director of the Center for Labor and Employment Law at St. John’s University, told The New York Times. “If you’re going to have a commissioner’s office, you need to step up. This guy thought he could bluster his way through.”

Goodell has also been criticized for the number of penalties, the types of penalties and the timing of the penalties he's implemented. After the NFL was criticized for not doing more to prevent players from getting concussions -- a conclusion the NFL was slow to recognize and tried to downplay -- Goodell eventually said he would suspend athletes for helmet-to helmet hits.

Roger Goodell has been applauded for making the NFL profitable. (AP)

On the other hand, Goodell has been applauded for turning the league into the money machine it is.

In 2013, the NFL was worth $9 billion. In 2017, the league was expected to generate about $14 billion, NBC Sports reported. Goodell said previously he hoped the NFL would be able to reach a staggering $25 billion in annual revenue by 2027.

Jones has been equally successful at monetizing his team. The Cowboys were worth $4.2 billion in 2017 -- the most valuable team in the world, according to Forbes.

The fight between Goodell and Jones seems to be nowhere near over, at least until Goodell’s contract is -- or isn't -- extended.