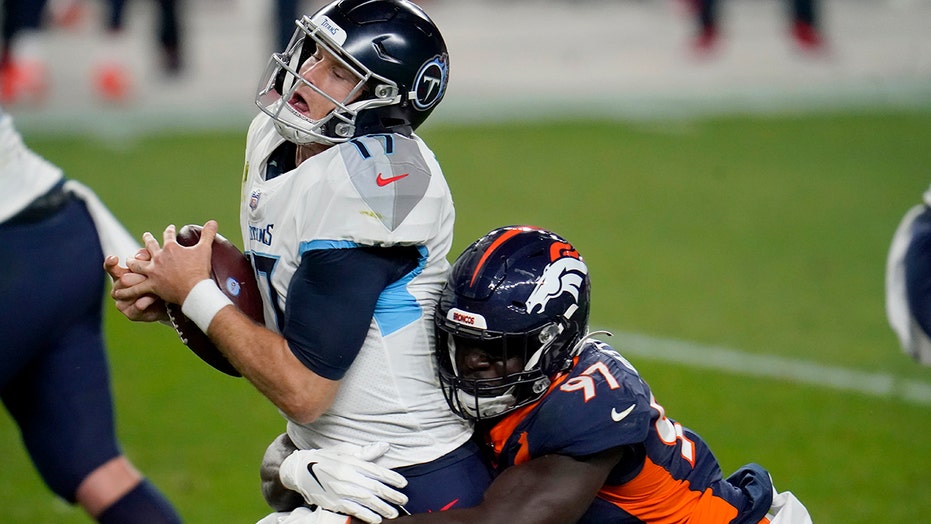 Jeremiah Attaochu is like those sharply dressed seat fillers at the Oscars. He replaced an injured Bradley Chubb last season and is filling in for an injured Von Miller this year.

He had 3½ sacks in a dozen games last season after signing on Oct. 1 and the seventh-year pro collected Denver’s only sack in the Broncos’ opener against Tennessee on Monday night.

“He can set an edge and he’s physical and he plays with lights-out effort," defensive coordinator Ed Donatell said Thursday. “He has good length, good power. ... I thought he was a great find by our personnel department to pick a guy up at that time of the year.”

The Broncos signed former Steelers outside linebacker Anthony Chickillo off the Saints’ practice squad on Thursday, and coach Vic Fangio said it will be between Chickillo and practice squader Derrk Tuszkas to serve as the fourth pass rusher behind Chubb, Attaochu and Malik Reed at Pittsburgh on Sunday.

This being his seventh season, Attaochu is the veteran of the group.

A second-round draft pick by the Chargers in 2014 after recording a school record 31½ sacks at Georgia Tech, Attaochu got off to a good start in San Diego. He appeared in 11 games his rookie year and recorded career bests in tackles (52) and sacks (six) his second season, when he started a dozen games.

He didn’t start again in two more seasons with the Chargers and one with the Jets before starting five games in Denver last year.

“I expect him to be a big part of the team,” Fangio said over the summer. “We really like him. He’s the right kind of guy. He plays hard, plays tough, very prideful and a great teammate. We’re happy to have him.”

Autaochu was one of the most outspoken and well-spoken Broncos during this summer of racial reckoning following the death of George Floyd while in police custody in Minneapolis. When the Broncos gathered as a team in downtown Denver for a peaceful protest, the normally soft-spoken Attaochu kicked things off with a moving speech and heartfelt prayer.

“When he spoke up and spoke out about that stuff, I wasn’t surprised,” teammate Justin Simmons said. “Jerry’s been a guy that I’ve looked up to since I’ve gotten to know him. He’s such a great accountability partner and really helped me navigate through the different things that are happening in society now.

“I was just happy because he can sometimes be maybe a little bit on the quiet side, but he understands his platform, too. I’m really glad he did it.”

When team president Joe Ellis addressed the team in the aftermath of Floyd's death and safety Kareem Jackson called for the Broncos to put their words into action, Attaochu volunteered to speak at the gathering before a march through downtown.

“I wanted to bring a sense of togetherness and really focus in on the fact that we all in this younger generation have dealt with certain things that our parents lived with and didn’t necessarily step out to change,” said Attaochu. “So, I just wanted to speak on the need for all of us to have some level of solidarity, some level of understanding that the issues that face our society today will require the help of a higher power because these are things that have been going on since before we were here.”

Attaochu said he began to speak out in Zoom meetings when the Broncos took a break from football to focus on the social unrest and racial reckoning sweeping the country.

“Our team president, Joe Ellis, got on the Zoom calls for a team meeting with us. We were doing something that the whole of America should have been doing and that’s really empathizing, finding common ground and understanding on a human level and listening to others,” Attaochu said.

He began sharing his story with teammates.

A native of Nigeria, he moved to Washington, D.C., at 8 years old.

“I experienced America through the lens of an outsider," Attaochu said. "Obviously, I’m a citizen and I’m an American now, but at first moving to this country as an 8-year-old from Africa, it’s a completely different perspective. I just wanted to offer that perspective.”

When the Broncos broke down into smaller groups to continue their discussions, “a lot of the guys in my position group understood that I had a voice and offered a different perspective in a lot of issues we were discussing. So, talking to Kareem, Von and Todd Davis motivated me to step forward and speak.”

Attaochu had reservations about speaking in front of thousands of people at first, but he knew he had to.

“We live in a very diverse country and not choosing to listen to a certain group of people because you come from a different background is not excusable anymore, especially in the NFL or any other industry where you’re interacting with people from different backgrounds, different cultures,” Attaochu said.

“You need to understand that America is not the same for everybody and the same freedoms that you enjoy, somebody else might not enjoy.”

“I’ve been in spaces where I never completely felt comfortable and I never really felt like I belonged,” he said. “So, hearing my teammates talk, listening and doing my research, then stepping out and speaking on what I think we all need to be doing, I definitely found my voice in that way.”