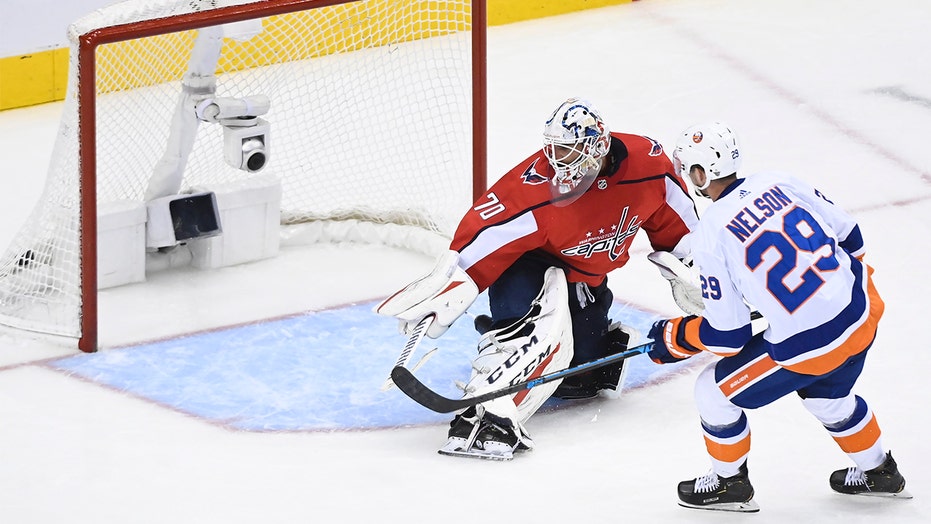 Long after Brock Nelson scored on a breakaway to restore the New York Islanders' lead, he and his teammates hemmed the Washington Capitals in their zone for a long shift that can wear an opponent down.

Then Cal Clutterbuck tipped Jean-Gabriel Pageau's shot past Braden Holtby to break the Capitals' will. It was the kind of sequence that coach Barry Trotz beamed at and was on display two years ago when he led Washington to the Stanley Cup.

Trotz is on the other side now, and his Islanders beat the Capitals 5-2 Friday night to take a 2-0 lead in the first-round series. New York played Trotz's trademark structured, suffocating style perfectly, from responding to a Capitals goal in the first minute to controlling the puck when it mattered most.

“That’s how you win, and guys are committed to that effort,” Trotz said. “We didn’t back off. We just stayed to our game, and we got the result we wanted.”

Given 86% of teams that go up 2-0 in a best-of-seven series in NHL history have gone on to win it, Trotz is well on the way to beating the team that let him walk rather than give him a raise after delivering the first title in franchise history. The Capitals instead promoted assistant Todd Reirden to head coach and have not since won a playoff series.

Trotz showed his value behind the bench when the Islanders reached the second round last year and again in these playoffs. The Islanders won a penalty-filled, physical Game 1 and handled a different style in Game 2 without looking fazed.

“We’re just trying to play the way that we know how to play,” Clutterbuck said. “That’s the strength of our team is getting back to that game that’s successful for us. They’ve got a lot of different ways they can play, and that’s a great team. We’re trying to focus on ourselves here and do what we can."

Capitals captain Alex Ovechkin registered his first point of the NHL's restart when he scored 56 seconds in. He scored again in the second period to tie it and missed out on a second career playoff hat trick when he hit the side of the net on a prime chance on the power play in the third.

Washington’s penalty kill that was a perfect 14-for-14 finally allowed a goal when Nick Leddy scored a power-play goal in the second period. A turnover by Lars Eller led to a goal by Matt Martin before Ovechkin tied it.

Then another Capitals mistake wound up in their net. Jakub Vrana coughed up the puck at the offensive blue line, springing Nelson for his breakaway goal 15 seconds after Ovechkin scored. Vrana was benched for the final 13 minutes of the period, and he's not the only Washington player who's struggling.

“We have some adversity,” Reirden said. “We have to fight through. It’s not going to happen easily, it never does, and we have to put more work in and match that compete to give ourselves a chance to have some of our skill be more present in the game.”

Knowing Trotz's experience and looking at the talented Capitals on the other side, the Islanders also know they're not going to move on to the second round without a fight.

“It doesn’t get any easier from here,” Martin said. "They have a championship pedigree over there. It’s just going to get harder and harder from here, so we’ve got to be ready and we’ve got to stay true to our game as much as possible and hopefully at the end of the day that’s enough.”

NOTES: Islanders D Johnny Boychuk missed his fifth consecutive game with an undisclosed injury. ... Backstrom was out after going into concussion protocol. ... Ovechkin scored his 66th and 67th playoff goals to move into sole possession of 20th on the NHL's career list. ... Eller returned after missing the last three games for the birth of his son.

Game 3 is Sunday at noon.