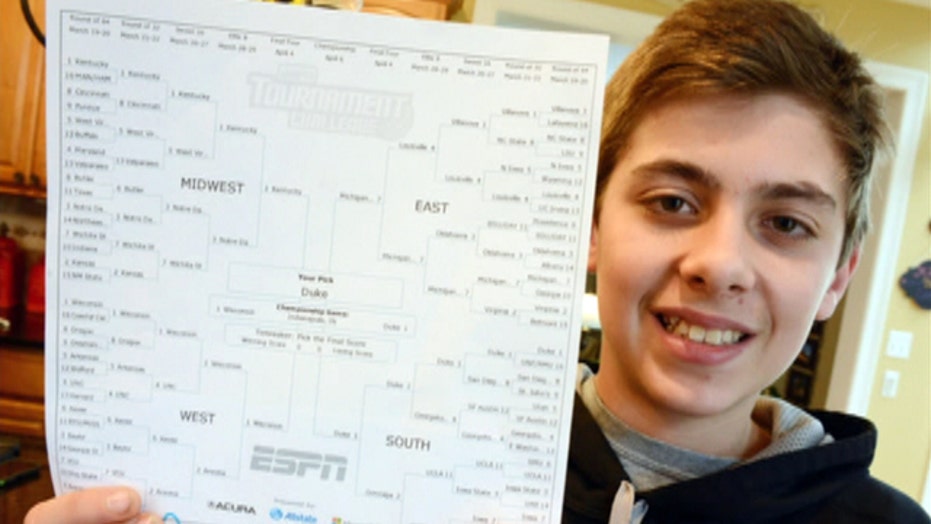 An Illinois sixth-grader completed a near-perfect bracket predicting the winner of the NCAA men’s basketball tournament, but has been deemed ineligible for the contest's grand prize due to being underage.

Although Sam Holtz finished in a tie for first place, ESPN officials told him that he is ineligible for the drawing to claim a $20,000 gift card and a trip to November's Maui Invitational tournament because he is only 12 years old. ESPN requires participants to be at least 18.

“I’m irritated, Holtz told the Daily Herald. “"Yes, I'm still proud of my accomplishment, but I'm not happy with the decision."

Holtz beat out the network’s panel of college basketball analysts, as well as President Obama and celebrities like Will Ferrell and Kevin Hart. The 12-year-old missed just six picks in the entire bracket.

Finishing with the best bracket does not give you an automatic claim to the top prize. ESPN awards the prize through a random draw of brackets that were among the top 1 percent in the contest. About 115,700 were in that percentile after Duke defeated Wisconsin to win the national championship Monday.

Kevin Ota, a spokesman for ESPN Digital Media, told The Associated Press the company is putting together a special prize for Holtz.

"We plan to have fun with this," Ota said Tuesday. "The great thing is that this kid beat all these experts out there."

Holtz was perfect picking games played in the Sweet 16, Elite Eight and Final Four. Out of 11.57 million brackets on ESPN's website, Sam finished tied for first with 1,830 points after Duke beat Wisconsin 68-63 in Monday's championship game. He entered 10 brackets in the contest.

"There is no secret," said Holtz, who attends Lake Zurich Middle School North. "There was some luck, and I studied ESPN.com. I just picked the teams that I felt had the best players."

His mother, Elizabeth, kept him home from school Tuesday.

''He wanted to go to school today, but I kept him home because ESPN said they planned to call this morning," she said. "He wants to go this afternoon, but I told him if Jimmy Kimmel calls, he's going to have to miss that too."