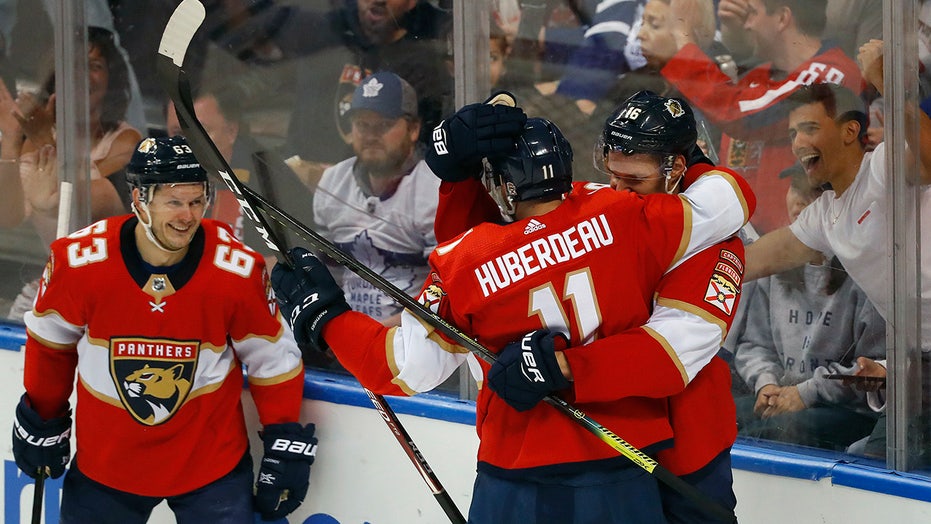 Jonathan Huberdeau is looking ahead after becoming the career points leader for the Florida Panthers.

Huberdeau had a goal and an assist, surpassing Olli Jokinen for the points lead with 420, and the Panthers beat the Toronto Maple Leafs 8-4 on Sunday night.

“It’s cool. Another great night. Couldn’t ask for better,” Huberdeau said. “Now it’s just try to take it all in tonight with my family and tomorrow focus on getting into the playoffs.”

Mike Hoffman scored two goals for Florida, and Aleksander Barkov and Vincent Trocheck each had a goal and two assists. Frank Vatrano, Mike Matheson and Josh Brown also scored in the Panthers’ highest scoring game of the season. Brett Connolly had two assists, and Chris Driedger made 43 saves.

“I see more balance in our game, more compete, we’ve got all four lines going,” coach Joel Quenneville said. “Everybody’s contributing and a lot of enthusiasm on the bench as well as the ice.”

“You take (the loss) as what it is which is a good slap in the face,” Maple Leafs coach Sheldon Keefe said. “It's a good reminder of how we can't play if we have any intention at all of being a successful team. It was a big step backwards for us here today defensively."

"Right off the bat there we were giving their best players walk-ins to the net and it's not acceptable,” Marner said. “(We) were leaving our goalies out to dry on multiple goals tonight. It's unfair to them and we have to be way better."

Marner’s 13th goal got the Maple Leafs within three early in the third. But Hoffman converted a one-timer off a pass from Huberdeau, making it 8-4 with the power-play goal 4:33 into the period.

Toronto had a goal disallowed with 6:49 left in the third due to a high stick by Cody Ceci.

Leading 3-0, the Panthers scored on their first three shots of the second. Matheson chased Andersen 49 seconds into the period. Vatrano’s short-handed goal, a shot from the low slot off a pass from Barkov, made it 5-0 at 2:25.

Trocheck’s shot from the top of the right circle beat Hutchinson at 5:46 for a 6-1 lead.

Huberdeau’s goal, a backhanded shot from in front, stretched the Panthers’ lead to 7-1 at 12:38 of the second.

NOTES: Marner has nine goals and 17 assists in 17 games since returning from an ankle injury that sidelined him for 11 games. ... Maple Leafs forward Andreas Johnsson returned after missing the past 15 games with a leg injury. ... Panthers C Brian Boyle played his 800th NHL game. ... Panthers G Sergei Bobrovsky missed the game with an upper-body injury.