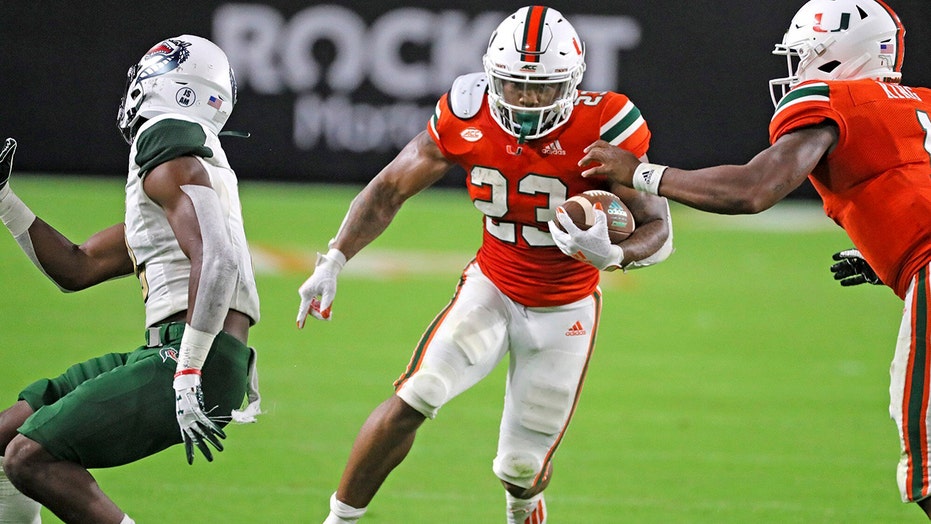 Cam’Ron Harris ran for 134 yards and scored twice to lead Miami to a 31-14 season-opening win over UAB Thursday night.

Harris’ second touchdown from 4 yards late in the third period gave Miami a 24-14 lead after the Blazers of Conference USA got within three on Spencer Brown’s 6-yard run.

Houston graduate transfer D’Eriq King threw for a touchdown and scored one for Miami, which became the first school from a Power 5 conference to begin the game-depleted 2020 season. ACC, SEC and Big 12 schools will play football while the Big Ten and Pac-12 cancelled fall sports because of coronavirus concerns.

“Couldn’t be more proud of our players," Miami coach Manny Diaz said. "Just everything they did to get us to this day. They did everything we asked during the summer. We kept each other safe. They gave us the opportunity to play today.”

“We have to pass the ball better moving forward,” King said. “But running the ball and keeping the defense off balance is the key to our success.”

The Hurricanes snapped a 7-7 tie and took the lead for good on King’s 12-yard run early in the second quarter. Jose Borregales’ 25-yard field goal in the Hurricanes’ first possession of the second half increased their lead to 17-7.

The Blazers (1-1) struck first on Tyler Johnston’s 16-yard pass to Austin Watkins with 2:40 remaining in the first quarter.

The lead was short-lived after Harris’ 66-yard run on the next drive. Miami opted to go for it on a fourth-and-1 at its 34 and Harris broke through the UAB line untouched for the longest touchdown run of his career.

Despite getting the go-ahead to play this season, Miami will be without highly regarded defensive end Greg Rousseau. Projected as a high NFL draft choice next spring, Rousseau opted to sit out the season.

UAB coach Bill Clark told a Birmingham radio station that a few of his reserves tested positive for coronavirus and didn’t make the trip to South Florida.

“I just left the locker room with a bunch of guys that are dejected, but we talked about not getting our heads down," Clark said. “I was really proud of the effort. You know, we are not into moral victories; we came to win the game.”

Thursday’s attendance of 8,153 at Hard Rock Stadium fell short of the 20 percent cap allowed at the 65,000-seat venue’s capacity in compliance with coronavirus social-distancing guidelines. Spectators were scattered throughout the stadium’s lower and upper decks.

“Once the game started you’re so wrapped up in the game," Diaz said. "The environment was a little different. This is the first major sporting event in Dade County since mid-March. We were happy to have the fans we had.”

Although King was thrilled to play again after sitting out last season, he felt emotional because of the absence of an important supporter. King’s father died in February.

“I had a lot on my mind tonight, “King said.”This is my first game in my entire life without my dad. I just wanted to play for him. I couldn’t stop thinking about him all night. I hadn’t played for a while so getting the win was the biggest thing for me.”

In addition to Rosseau, backup offensive linemen Kai-Leon Herbert and Zalon'tae Hillery have opted to sit out the season. Backup quarterback Tate Martell was suspended for the opener because of a violation of team rules.

UAB’s next game is Sept. 24 at South Alabama.