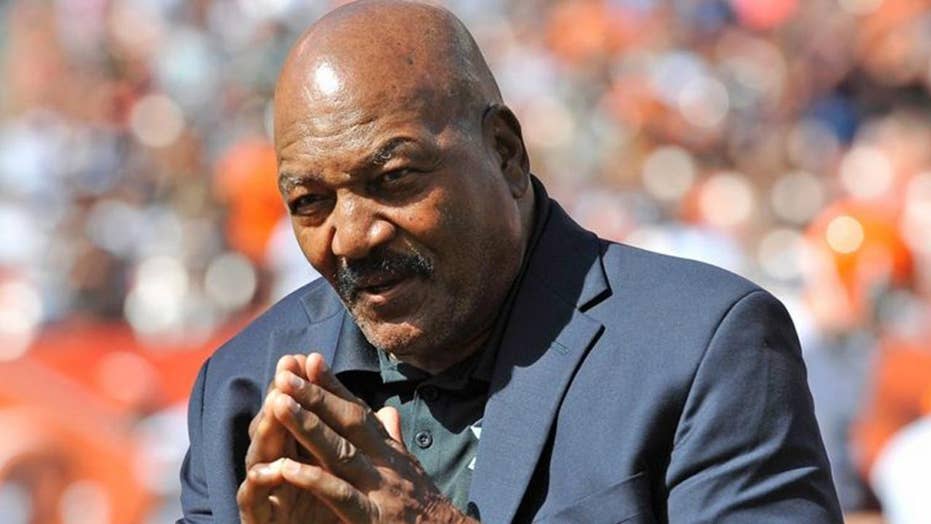 NFL Hall of Famer says he 'will always respect the flag.'

Jim Brown, Hall of Fame running back and civil rights champion, said Tuesday that he would always stand for “The Star-Spangled Banner” — and would prefer if players would, too.

Brown, 82, who spoke before the HBO premiere of “Hard Knocks,” said: “I’ll never kneel and I will always respect the flag.”

“I am not going to denigrate my flag and I’m going to stand for the national anthem,” he said. “I’m fighting with all of my strength to make it a better country, but I don’t think that’s the issue. Because what is the top side? Are you not going to stand up? This is our country, man.

“I’ll never kneel and I will always respect the flag.”

“We work hard to make it better and that’s my attitude, so I don’t relate to this issue because it’s newsworthy because where are your superstars? And where are they at? Aren’t they making comments?”

While Brown said he preferred if players would stand for the national anthem, he also respected the players’ right to do what they want — even if it is to kneel.

“Well, if you take the bottom line, what are we talking about? We’re talking about freedom to express one’s self, and if you don’t break any rules then you have that particular right,” he said.

Protests during the anthem have enveloped the league since former San Francisco quarterback Colin Kaepernick took a knee to protest social injustice during the 2016 season.

The NFL modified its anthem protocol in May, prohibiting demonstrations for 2018, but allowing players to remain in the locker room during the anthem.

"But this is my country, and I'll work out the problems, but I'll do it in an intelligent manner."

Brown, who championed civil rights during his playing career and became an activist in retirement, has remained consistent on his stance, having addressed the issue in 2017.