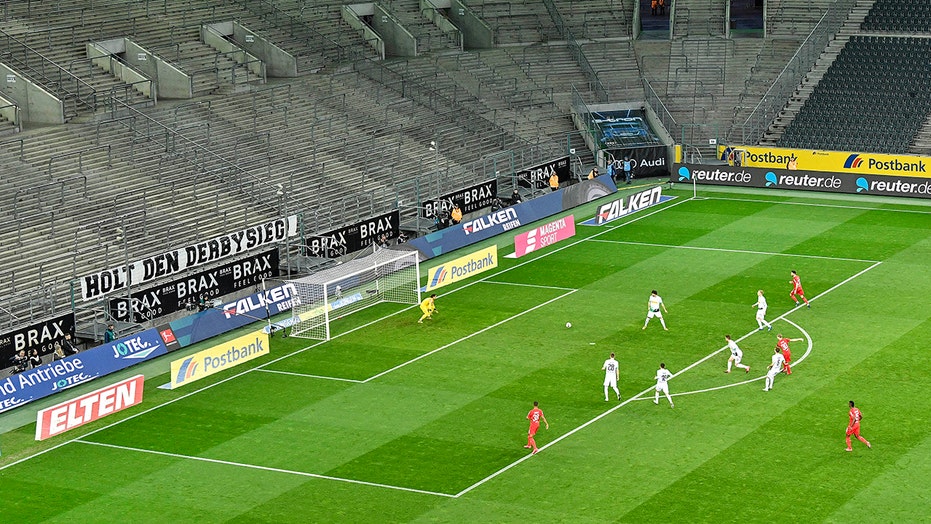 European soccer's biggest leagues continue to be suspended and players are coming under pressure to take pay cuts.

Sometimes it's voluntary, like at German title challenger Borussia Mönchengladbach, where players approached the club with an offer to take reduced salaries.

Sometimes players aren't given a choice. In Scotland, Hearts has asked all its players and other fulltime employees to accept a 50 percent pay cut, or contract termination.

The cuts come as clubs across Europe grapple with a sudden shortage of funds. Wage bills for the season were budgeted on the expectation of income from TV broadcast fees, sponsorships and ticket sales, which are all being scaled back.

Germany is leading the way on voluntary cuts.

Gladbach is a surprise title contender and on track for a lucrative Champions League spot next season. If the season isn't played to the end, it's not clear how European places will be doled out.

Gladbach sporting director Max Eberl says the players approached the club with an offer of voluntary pay cuts, and the coaching staff, directors and executives have joined in.

“I am very proud of the boys. A clear signal: We are standing together for Borussia in good and bad times,” Eberl said Thursday. He didn't specify how much of a salary cut they'd agreed to.

Gladbach CEO Stephan Schippers said the club and Bundesliga are in their toughest financial situation in more than 20 years because of lost revenue from ticket sales, TV and sponsorship.

Gladbach played a game last week in an empty stadium. The club estimated it lost about 2 million euros ($2.16 million) in revenue by playing without fans.

The German league has said clubs could collapse if the season doesn't resume. It's arguing for games in empty stadiums so broadcast and sponsor deals resume to mitigate the financial impact.

At second-tier Karlsruhe, players have agreed on reduced salaries for March, April and May.

“For us as a team there's no question that we are moving even closer together in the club and want to do our part,” captain David Pisot said. Thomas Hitzlsperger, CEO of Stuttgart, told local newspapers that salary cuts would be on the agenda there too.

Other clubs are enforcing pay cuts.

Scottish club Hearts said all fulltime employees will be asked to take a 50 percent pay cut from April. The only exception will be smaller cuts for those with annual salaries below 18,135 pounds ($21,100).

“I want to assure everyone that these decisions have not been taken lightly. If I was not absolutely convinced that this is necessary for the future sustainability of our business, I would not be asking our employees to face these cuts,” chairman and CEO Ann Budge said Wednesday.

In Switzerland, clubs have asked players to sign up for wage reductions as part of a federal government-backed unemployment insurance program. On Friday, Sion announced it fired nine players — including former Arsenal teammates Johan Djourou and Alex Song — for refusing to agree.

European football's governing body, UEFA, is trying to help. It's postponed the European Championship to 2021 to allow national leagues to finish their seasons and keep clubs afloat.

UEFA has extended a March 31 deadline by one month for clubs to show they have no outstanding debts for taxes and transfer fees.

The “Financial Fair Play” system monitors at least three years of accounts for hundreds of clubs that qualify to play in the Champions League and Europa League. Clubs that fail to break even on commercial income and spending on transfers and wages risk sanctions that include being expelled from competitions in the most severe cases.

UEFA said the established rules allow for unforeseen circumstances, which “is taken into account as part of the clubs’ assessment on a case by case basis.”