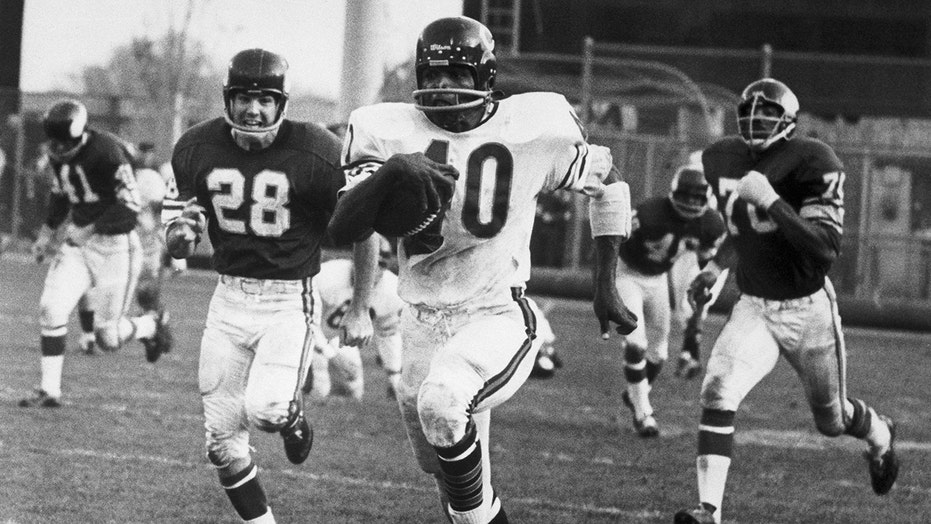 Chicago Bears legend Gale Sayers, largely considered one of the greatest running backs of all time, died Wednesday at the age of 77, the Pro Football Hall of Fame announced.

Hall of Fame President and CEO David Baker issued a statement confirming Sayers’ passing. He did not offer any details regarding the cause of death.

"All those who love the game of football mourn the loss of one of the greatest to ever play this game with the passing of Chicago Bears legend Gale Sayers," his statement read. "He was the very essence of a team player -- quiet, unassuming and always ready to compliment a teammate for a key block. Gale was an extraordinary man who overcame a great deal of adversity during his NFL career and life.”

Sayers had a relatively short career but dominated in his seven seasons with the Bears, easily solidifying his place in NFL history.

Drafted in the first round of the 1965 draft, Sayers had an immediate impact on the field. He was named NFL Rookie of the Year after totaling 22 touchdowns and 132 points, both records at the time.

Sayers was named to four Pro Bowls, where he was named Offensive Player of the Game three times. He was selected First-team All-Pro five times and was named NFL Comeback Player of the Year in 1969 after tearing his ACL and MCL in his right knee.

He finished his career with 4,956 rushing yards, 39 touchdowns, and an average of five yards per carry.

Sayers became the youngest player ever inducted into the Hall of Fame in 1977 at just 34 years old.

"The entire Pro Football Hall of Fame family mourns the passing of Gale," Baker's statement read. "Our thoughts and prayers are with his wife, Ardie, and their entire family. We will forever keep his legacy alive to serve as inspiration for future generations. The Hall of Fame flag will fly at half-staff until he is laid to rest."

“The NFL family lost a true friend today with the passing of Gale Sayers,” NFL Commissioner Roger Goodell said in a statement. “Gale was one of the finest men in NFL history and one of the game's most exciting players.”