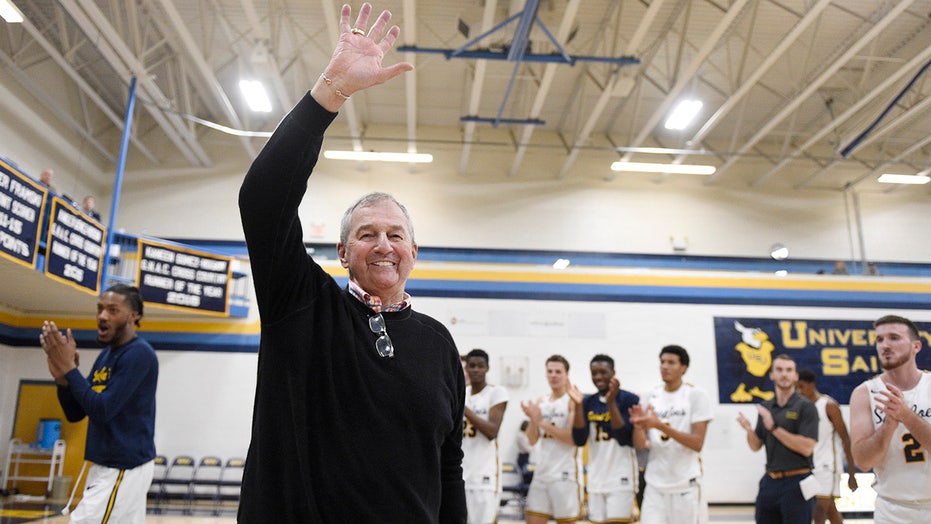 Jim Calhoun’s 900th win looked like so many others during a Hall of Fame coaching career.

He stomped. He screamed. He slammed objects.

The only real difference is the sideline he now controls.

The longtime Connecticut coach added another milestone Friday night when the University of Saint Joseph beat Pratt Institute 105-61, two years after he returned to his passion he couldn't stay away from any longer.

“I do love it," Calhoun said. “I know it doesn’t appear that way all the time."

Now in his second season coaching in Division III, Calhoun joined Mike Krzyzewski, Jim Boeheim and Bob Knight — all former rivals and national champions at college basketball’s highest level — as the only coaches to coach at least 10 seasons in Division I and reach 900 victories. Those Hall of Famers all became good friends, which he said made this achievement more meaningful.

Now he’s trying to build another program from the ground up.

His return to coaching in 2018 came the same year the former all-women's school became fully coeducational, with Calhoun’s hiring bringing not only attention, but needed funds for improvements.

He has led fundraising for a new gymnasium that’s expected to open next year and replace the 500-seat O’Connell Center. And his players, all from New England, love that the guy they watched win national championships on TV is now working with them.

“Now seeing him every day, it’s really a blessing," junior Jordan Powell said. “And he doesn’t make it about him. He helps us on the court and off the court."

Calhoun improved to 900-394 in a 42-year career that appeared over in 2012. He had battled problems with his health and the NCAA, suspended three games in his final season in Storrs for recruiting violations. It seemed the right time to walk away.

But he didn’t stay away.

After working as a TV analyst and watching former player and assistant Kevin Ollie guide the Huskies to a fourth title in 2014, Calhoun welcomed the chance to lead his own team again, even one that’s close to home geographically but miles away from where he coached under the brightest lights in college basketball.

“They fill a void that was missing," Calhoun said of his players. “Even though I did those ESPN games and that was fun, it’s not the same."

He’s now in the Great Northeast Athletic Conference, with no NBA lottery picks like Ray Allen, Kemba Walker or Donyell Marshall — who was at the game — on his roster. No. 900 showed how much of a turn Calhoun's career has taken toward the end, as No. 800 was in one of those Big East showdowns in which he so often took part. His second-ranked Huskies beat No. 8 Marquette 93-82 in February 2009, the only season in which Calhoun would reach the Final Four but not win the championship.

This one came in a gym whose wooden bleachers weren't fully filled, and with the parking lot outside closed for the construction on the Blue Jays' future home.

Calhoun emerged about five minutes before the game and slowly walked toward his bench — specifically, to his higher chair next to the bench from where it’s easier to sit down and get back up.

And he did, often.

Like when the Blue Jays allowed a layup on a back cut that tied it at 8 after a little more than four minutes. Or any other time he needed to scream at someone, whether a player, referee or both.

He clutched a bottle of water in his hands for the first five-plus minutes, until angrily slamming it to the ground behind him and leaping off his chair after a turnover in transition.

Calhoun finally calmed down at the end, with a wave to the cheering crowd when his milestone was announced as he walked off the court.

His team came in second in Division III in field goal percentage defense and plays like his early squads after arriving at UConn in 1986, utilizing full-court pressure to wear down and eventually pull away from its opponent. That style sent him on his way to 625 wins in Storrs, after winning 248 in 14 seasons at Northeastern to begin his career.

And now 27 at Saint Joseph, where a career that once looked finished is still going strong. And one, he says, that's more about the relationships he's made than the games he's won.