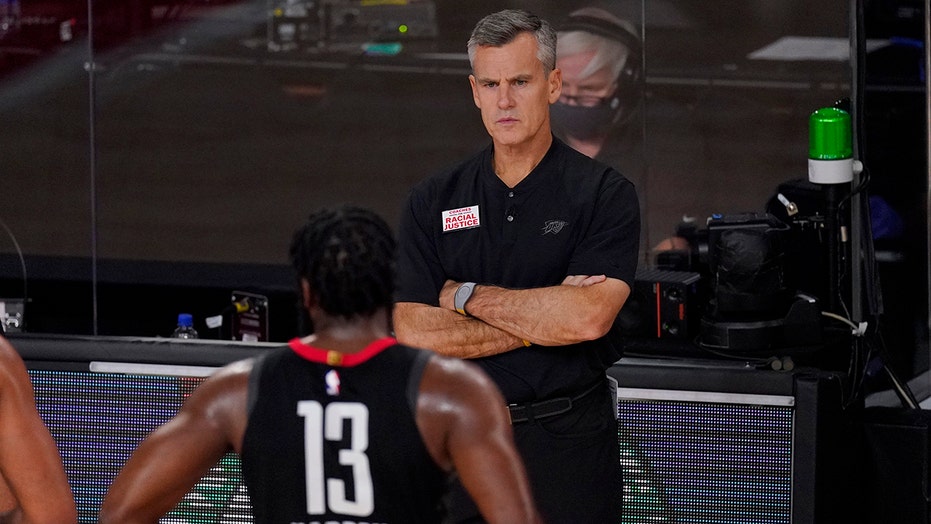 The Chicago Bulls weren't on Billy Donovan's radar when he and the Oklahoma City Thunder parted ways after five successful seasons.

Things sure changed in a hurry.

“I wasn’t looking at anything," Donovan said. "It was five great years in Oklahoma City. I think it’s always emotional when you leave a place that you enjoyed working with the people you were working with. I was around some terrific people in the organization, tremendous players. You’re just kind of decompressing. So this kind of came out of left field for me.”

The Bulls introduced Donovan as their coach on Thursday, two days after they announced they landed arguably the most attractive candidate on the market to help turn around a struggling team with new management.

Donovan goes from working with stars such as Kevin Durant and Russell Westbrook and Paul George and Chris Paul to trying to lift a franchise with one playoff appearance in five seasons. He was 243-157 with the Thunder and led them to the playoffs each season.

Donovan was a finalist for NBA Coach of the Year this season after Oklahoma City outperformed expectations. He split with the Thunder on Sept. 8 after he couldn't get the assurances he wanted from general manager Sam Presti.

On Thursday, he pushed back on the idea that he was against coaching a rebuilding team, pointing out he built a powerhouse at Florida before he moved to the NBA.

“That was really never, ever about it for me,” he said. “It was a lot more important for me, knowing that my time had ended there, what was going to be the environment, the situation going forward. I've never really ever talked about that at all. I do feel like Oklahoma City was incredibly open and honest with me."

He said he was “very positive” feelings from his time with the Thunder. Once he became available, the Bulls wasted no time making it clear they wanted him.

Donovan met in person with Karnisovas and Marc Eversley for 5 1/2 hours to get the process in gear. He later had a long discussion with chairman Jerry Reinsdorf and COO Michael Reinsdorf.

And when Donovan accepted the job, Karnisovas said, “I could not stop smiling.”

Hiring Donovan was a rare big and bold move for the Bulls. It also hammered home they have a different vision now for building a contending team. With the players they have and future cap space available, they believe they are in position.

They expected to make a big jump behind Zach LaVine and Lauri Markkanen, only to stumble to their second straight 22-win season. They were 11th in the Eastern Conference when play was stopped because of the pandemic, and were among the eight teams not invited to the restart in Florida. The Bulls missed the playoffs for the fourth time in five years and fired coach Jim Boylen.

“When we sat down and talked about the roster, I thought this roster was too talented for what they showed the last two years,” Karnisovas said. “They have a lot of potential, and we kind of agreed there's a good mix of young players and vets, from (draft) picks to cap space in the future to build this team. On both sides, I think there was a lot of optimism looking at the roster.

Donovan said he was “taken aback” by Karnisovas' vision and is looking forward to “working hand in hand” with him. That's something they haven't done before. They don't really know each other, but they have mutual friends in P.J. Carlesimo — Karnisovas' coach at Seton Hall — and USA Basketball national team director Sean Ford.

"From building the front office to now going after Billy — from Billy's resume to being just a great human being — I'm going to go after best available regardless of my relationship with the person," Karnisovas said. “I'll do all the background checks to make sure that I'm getting the right guy. Billy was the guy for us.”