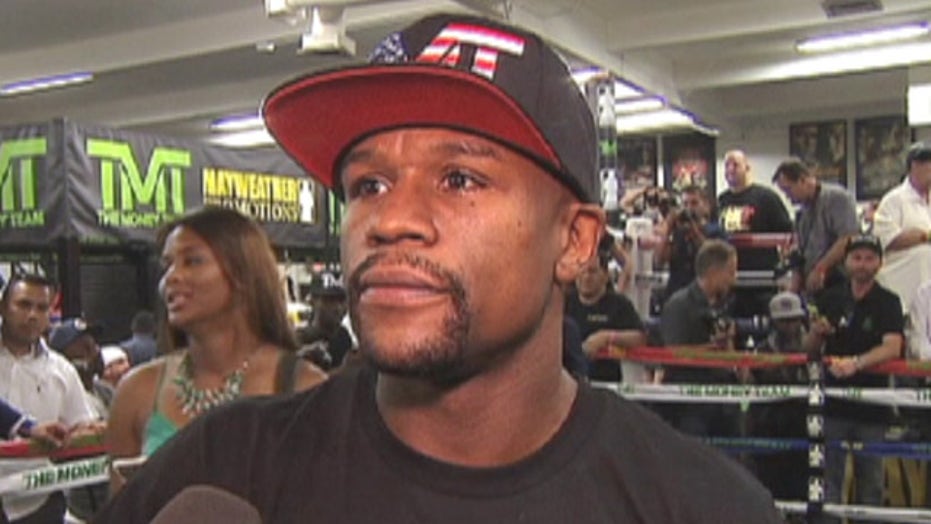 Training for Pacquiao, Mayweather goes back to basics

As anticipation builds for his May 2 bout with Manny Pacquiao, Floyd Mayweather Jr. talks about his training technique.

Mayweather’s family, team and celebrity supporters were all there to support the boxer as he went through a workout for the press on Wednesday.

Mayweather went through his routine in front of a media mob. It’s less than two weeks before Mayweather puts his welterweight title and undefeated 47–0 record at risk, but he says he isn't worried.

Mayweather told Fox News Latino that this fight is no different than any other. He fights to win. But this time he went back to his roots while training.

“I’ve done a couple things different as far as going back to the basics,” Mayweather said. “Chopping trees, swimming – going back to square one where it all started from.”

The fight is a showdown between the two most dominant boxers of the last decades, and the possibility of a match has been talked about on-and-off for more than 5 years now. It’s now slated to “determine the best boxer of our generation.”

Despite Floyd’s perfect record, there are critics who say this fight could be his first loss.

Pacquiao is a fast, agile fighter who’s “thoughtless” skill could overcome the champ.

Mayweather’s father, Floyd Sr., addressed some who have suggested that his son might lose: “Mike Tyson said it, Holyfield said it, Roy Jones said it. Guess what? I know something that they don’t.” He added, “Evidently they don’t know nothing about boxing.”

The fight is expected to generate about $400 million. Mayweather stands to take in upwards of $150 million.

“He is just going to give us something that the world has been waiting for,” Lil' Kim said.

And the world will be watching on May 2.