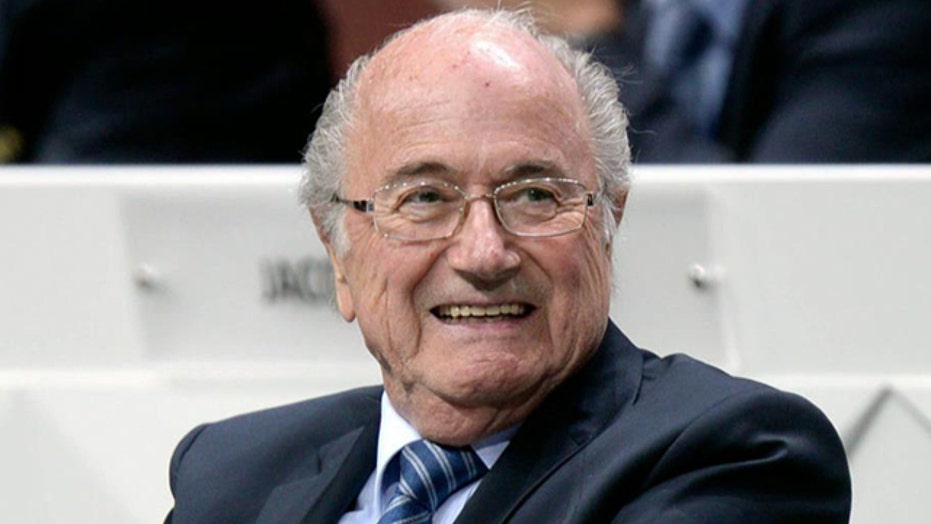 The embattled head of FIFA Sepp Blatter was reelected Friday as president of the organization, amid allegations of the worst corruption crisis in the world soccer league’s 111-year history.

In 2010, Russia was chosen to host the 2018 World Cup, and Qatar was awarded the 2022 tournament amid widespread allegations of wrongdoing.

The U.S. was one of the losing bidders for the 2022 World Cup. On Wednesday, U.S. authorities indicted 14 people on bribery, racketeering, fraud and money-laundering charges going back to the 1990s.

One of the suspects-- the U.S. head of a Brazilian sports marketing company, Aaron Davidson-- pleaded not guilty in a New York court Friday to federal bribery-related charges. Davidson, 44, head of Traffic Group's U.S. unit in Miami, is accused of arranging millions of dollars to secure lucrative media and marketing rights for soccer matches, Reuters reported.

Seven of the 14 charged officials -- including two serving FIFA vice presidents -- were arrested in Zurich on Wednesday ahead of the congress.

"I am not going to use the word coincidence but I do have a small question mark," Blatter said about the timing of the raid before the election Friday.

After his victory Friday, Blatter warned European soccer that it faces losing influence on his executive committee,  saying FIFA "must have a better representation of the confederations and the number of members" on its executive panel. The prince had been backed by most members of UEFA, the European soccer body. UEFA has eight of the 25 voting seats on FIFA's executive committee, a legacy of its position as the most influential region in world soccer. It has also three of FIFA's eight vice presidencies.

Afghanistan kicked off the voting as delegates handed over secret paper ballots in alphabetical order at the meeting Friday. The winner needed a two-thirds majority but Blatter was one vote shy of that, receiving only 133 votes, to Prince Ali’s 73 of the 206 valid votes.

In a second round of voting, Blatter won another four-year term by receiving a simple majority of the votes. Forcing the ballot to a second round represented a victory of sorts for Blatter's critics, denying the incumbent president an emphatic mandate in his next term.

Amid the dramatic build up to the election, UEFA president Michel Platini had appealed to Blatter to immediately step down -- calls the president rejected.   Platini sat still and did not applaud after Blatter's acceptance speech on Friday.

Blatter refused calls to resign after FIFA was targeted by U.S. and Swiss authorities in separate corruption investigations.

"If two other countries had emerged from the envelope, I think we would not have these problems today," Blatter said Friday before the election results were announced. "But we can't go back in time. We are not prophets. We can't say what would have happened."

Britain's Serious Fraud Office said Friday it was examining information relating to possible FIFA corruption, Reuters reported. ``The SFO continues actively to assess material in its possession and has made plain that it stands ready to assist ongoing international criminal investigations,'' a spokesman said. The SFO has not launched a formal criminal investigation.

"I am willing to accept the president of FIFA is responsible for everything but I would at least like to share that responsibility with everyone," Blatter said in a presidential address on Friday morning. "We cannot constantly supervise everyone in football ... you cannot ask everyone to behave ethically."

Blatter also cautioned that "it will take some time" to rebuild FIFA's reputation.

"The events of Wednesday have unleashed a storm and there was even questioned whether this congress would be organized or change the agenda," Blatter said. "Today I am appealing to unity and team spirit so we can move forward together. That may not always be easy but it is for this reason that we are here together today."

Blatter's opening address to the congress was briefly disrupted by a pro-Palestinian activist, who held up a red card and shouted "Red card to racism." The protest was to draw attention to a campaign that aims to stop Palestinian players from being detained by Israeli security forces.

It took several awkward minutes, but finally there was a handshake between the Israeli and Palestinian soccer chiefs at the congressional meeting.

Applause broke out after the handshake Friday between Jibril Rajoub and Ofer Eini. Eini made the offer after Rajoub withdrew a motion to ask FIFA to suspend Israel from world soccer and both sides pledged to work together to overcome their differences. But Eini had to wait for several minutes while FIFA debated vote procedure, before walking over to Rajoub's seat to get the handshake done.