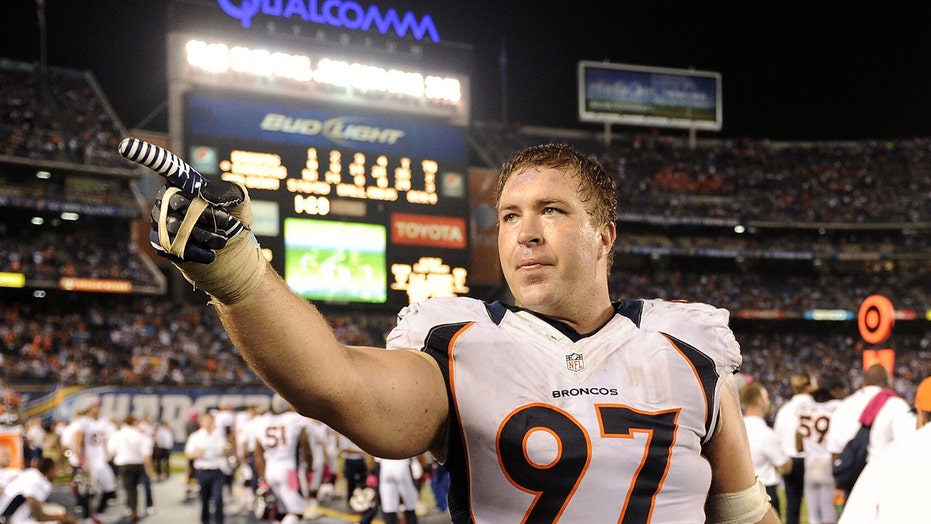 A former NFL defensive lineman was arrested Wednesday after allegedly shooting a woman at a Colorado business.

Bannan played in the NFL from 2002 to 2013 with the Buffalo Bills, Baltimore Ravens, Denver Broncos, St. Louis Rams and Detroit Lions.

The woman, who was shot in the shoulder, identified the gunman as Bannan and was taken to a hospital with non-life threatening injuries, according to The Denver Channel.

Police said the shooting appeared to be “random” as Bannan and the woman worked in the same building but were distantly acquainted, according to the Boulder Daily Camera.

Justin Bannan #97 of the Denver Broncos reacts during a 35-24 comeback win over the San Diego Chargers at Qualcomm Stadium on October 15, 2012 in San Diego, California.  (Getty)

The woman reportedly told police she only knew Bannan because he was the owner of the building. Bannan is the owner of Black Lab Sports and the woman worked for a company that operates inside the same building.

The woman was in the building about to unlock a therapy room when Bannan was already in the room and shot her in the shoulder, the newspaper reported, citing a police affidavit.

According to the Boulder Daily Camera, police said officers found Bannan and said he was carrying a duffle bag with two loaded handguns, an extra magazine and two rolled-up $20 bills coated with a white powdery substance which later tested positive for cocaine.

Bannan reportedly told officers he “didn’t mean to shoot her” and he was in the therapy room hiding because he believed the Russian Mafia was after him and tracking his cellphone. He said he fired the gun on “accident.”

Bannan also told officers he suffers from hydrocephalus, which can lead to the loss of reasoning skills, according to FOX 31 Denver.

Bannan had a court appearance Thursday and was being held on $500,000 bond. He is set to have a formal filing of charges on Oct. 22, according to the Boulder Daily Camera.