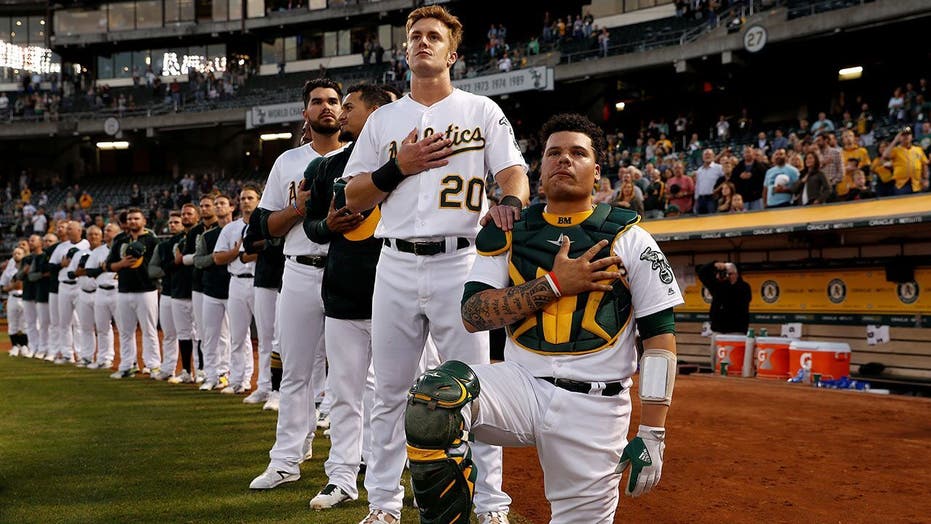 After George Floyd’s killing sparked a nationwide conversation about racial equality and justice, MLB decided to take its own stance. Black players around the league united to record a video emphasizing the need to listen, and captioned it #Justice4BLM. On the first day of the 2020 Draft, the league opened with a “Black Lives Matter. United for Change” message, and executives from all 30 teams held up signs echoing that message.

Back in 2017, when 49ers quarterback Colin Kaepernick first brought the message to the national spotlight by kneeling during the national anthem, former A’s catcher Bruce Maxwell decided to do the same, bringing the conversation to the MLB. Maxwell remains the only MLB player to have done so.

Now, he’s wondering why that unity didn’t apply to him.

“I got pushed out of the game because I took a knee during the national anthem,” Maxwell told ESPN. “It eats at me. I find a way to still get my work done, but it still eats at me. Everyone talks about veteran leadership, but where were they? Chris Archer deflected every question. Didn’t even want to make the BLM video. No time for that dude. Andrew McCutchen? Where was everybody? How do you let a guy with one year of service time out-lead you?

“I didn’t do this for the clout. I did this because of what’s happening in this country and because we play in the whitest sport. We play in the most racist sport. There should be more of us out there.”

Playing in just his second season in the league, Maxwell’s decision to kneel was met with large scale skepticism and contempt. Many around the league questioned his motives, accusing him of doing it for attention or trying to make a name for himself. Dodgers manager Dave Roberts, one of just two African American managers in the league, said he would “have a problem” with players kneeling because of his father’s military service. Maxwell received minimal support from players and staff around the league.

That’s why he’s not buying the current actions taken by many around the league. In his mind, they haven’t risked anything, but are being listened to and lauded for their message as the national conversation has shifted in recent weeks.

“The season’s gonna resume,” Maxwell said. “They’re going to get more fame because it’s going to look like they’re standing up for what’s right. They’re making T-shirts and they’re showing they care, but they don’t go back to the original sacrificed person. Where was all of this then? It’s easy to talk because everyone’s talking. I was out there by myself. I’m bitter as f—, and I’m not hiding it.”

Maxwell lasted just three seasons in the league. In 2018, he was demoted to a backup behind veteran Jonathan Lucroy before being sent to the minors, with the club released him following the season. No team signed him that offseason, and he currently plays for the Monclova Acereros in Mexico.

As the conversation continues to progress throughout the league, many have since reached out to Maxwell to apologize, including C.C. Sabathia, Cameron Maybin, and Torii Hunter. At the time, Maxwell received death threats, felt ostracized by many throughout the league, and fell into turmoil in his personal life.

Before the coronavirus pandemic shut down baseball, the A’s offered to bring Maxwell back because they needed catching depth. Maxwell turned them down. He’s enjoying his new life in Mexico.

“The last three years of my life have been hell,” Maxwell said. “I lost my money, my job, my wife, and I’ve finally gotten to a place where I could figure myself out. When I came down here, all eyes were on me, without backlash. Honestly, I’ve never been happier. I busted my ass to become myself. I like myself now, and this opportunity here, nobody gave it to me. I earned it.

“I finally feel like I belong somewhere, and I cannot put that aside right now. My happiness makes me money, because when I’m happy, nobody can touch me. People love me unconditionally down here, unlike in the States.”