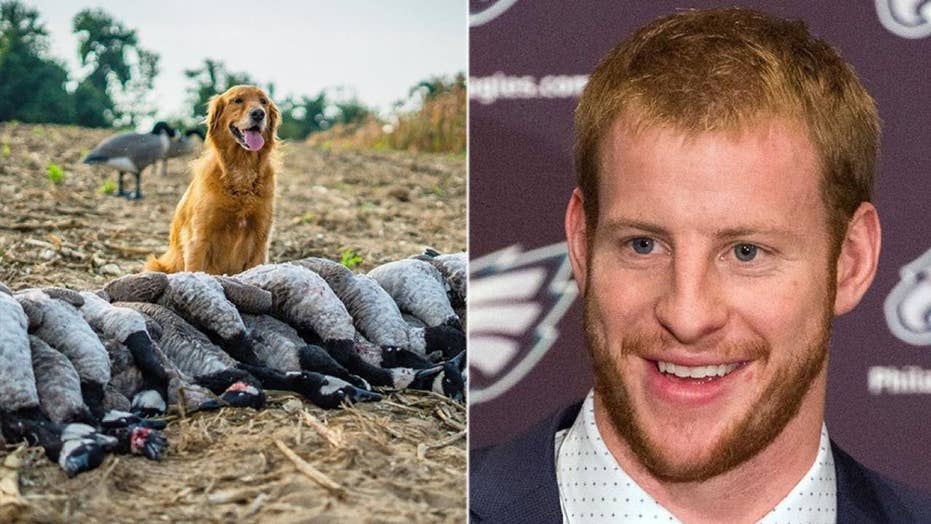 Eagles' Carson Wentz fires back at criticism over tweet

Eagles quarterback Carson Wentz is in the dog house after firing back at critics who say his tweet wishing his 'hunting buddy' dog a happy birthday could cause offense.

Before his season was ended by a knee injury, Philadelphia Eagles quarterback Carson Wentz was making news for his playmaking ability.

Tuesday, the MVP candidate made headlines with his response to a Twitter user who was critical of a hunting photo he posted to wish one of his dogs a happy birthday.

Wentz, known to be an avid hunter, took to Twitter late Monday night to wish his dog, Henley, a Happy 5th Birthday. In his tweet he included a photo of the dog when she was a puppy, and a photo of her standing over several geese following an apparently successful day of hunting.

One follower responded to Wentz’s tweet saying in part, “As a friend I wanted to quickly highlight that a man in your influential position might cause offence (sic) through the posting of your first picture. I support its sentiment however the context and content of the pic could offend.”

Wentz then shared that user's tweet and included his response to the user’s claim the photo could be offensive.

“Appreciate that, but offensive and controversial? Two of the main things I tweet about are Jesus and hunting. That’s what I’m passionate about and that won’t ever change! When you love something, you talk about it! Stay convicted about it and don’t worry what others think!” Wentz wrote.

Wentz’s response has since been retweeted thousands of times and liked nearly 30,000 times.