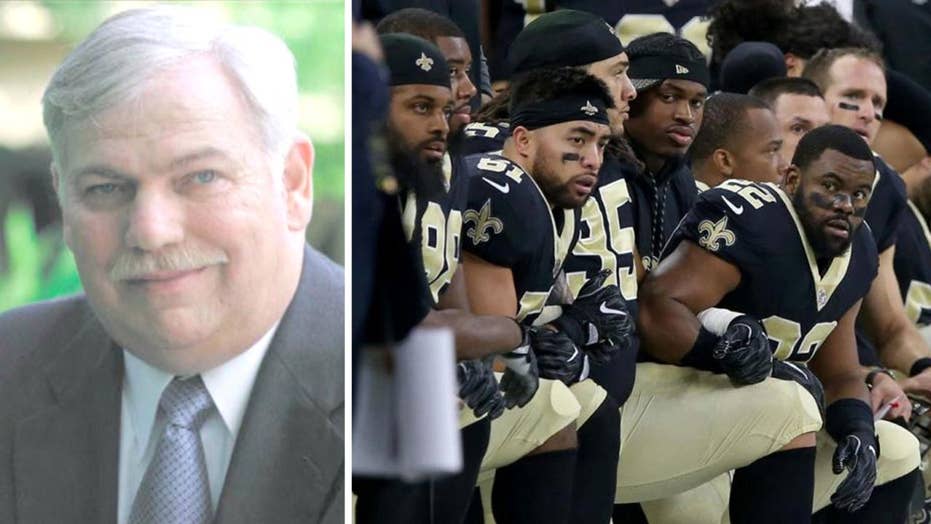 A disabled Navy veteran said he declined to accept an award at a New Orleans Saints game due to the controversy over players protesting during the national anthem.

The Saints organization was going to honor retired Cmdr. John Wells, the executive director of Military Veterans Advocacy, with the Peoples Health Champion award during last week’s game in New Orleans, according to The Advocate.

On Wednesday he told the organization he was unable to accept the award at the Mercedes-Benz Superdome because of the anthem protests. Saints players have been seen kneeling before the anthem and some continue to do so during the national anthem.

“Although I am touched and honored to be selected for such an award, the ongoing controversy with NFL players' disrespect for the national flag forces me to decline to participate in the presentation,” Wells said. "I am unable, in good conscience, to enter an NFL stadium while this discourtesy prevails. Since this award is tainted with the dishonorable actions of the NFL and its players, I cannot accept it.”

Wells served in the Navy from 1972 to 1994 and afterward became an attorney concentrating in military and veterans law, according to the New Orleans Times-Picayune. He was set to receive the award given by Medicare to senior citizens who have made significant accomplishments.

The Saints said in a statement Thursday that they were disappointed by Wells’ decision.

“We will not allow Mr. Wells' decision and subsequent media appearances to distract our players and organization from continuing to honor and support our military and veterans," the statement read. "We, as an organization, have decided to move on from this sad and divisive discourse and focus our attention on supporting our military and veterans.”

Each NFL team has protested in some form during the national anthem since President Trump’s comments about Colin Kaepernick  prior to Week 3 of the season. Trump has encouraged owners to punish players who kneel during the anthem.