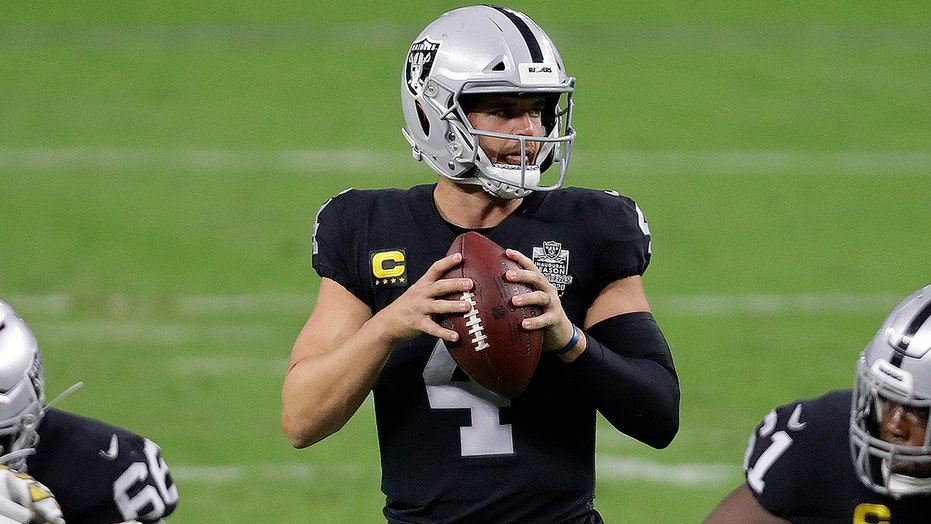 The problems the Raiders had scoring the previous three seasons haven’t been an issue through two games.

Derek Carr has been in command of the offense, helping Las Vegas post back-to-back 34-point games on the way to the team’s fourth 2-0 start in the past 25 seasons following a 34-24 win over perennial powerhouse New Orleans on Monday night.

“I’ll let everyone else talk about the statement,” Carr said after the game. “I’m tired of talking and I think people can hear it in my voice sometimes. It’s nice. It’s nice to go out and be 2-0. It’s nice to play against the Saints and get a win. It feels good. But like I told the guys after the game, job is not done.”

Through two weeks, the Raiders have scored eight touchdowns and four field goals on 18 drives to rank tied for second in scoring efficiency and rank third in touchdown efficiency.

It's a far cry from the past three years when the Raiders were one of three teams that failed to average 20 points per game in any season from 2017-19.

That comes with only one turnover and two three-and-outs so far this season, prompting coach Jon Gruden to call Carr’s play “awesome" after the win in the team's first home game in Las Vegas.

While he has mostly thrown short since a couple of deep throws early in the season opener, Carr has been efficient. He has completed 50 of 68 passes for 521 yards, four TDs and no interceptions the first two games.

“It tells me that we’re on the right track,” Gruden said. “We have a real competitive group of guys. We need to get healthy.”

The offense relied heavily on the combination of Carr throwing to tight end Darren Waller. The two connected 12 times for 103 yards and a touchdown as Waller frequently got open in the middle of the field. No other Raiders player had more than three catches. Waller’s 18 catches so far this season are the second most for a Raiders player through two games, trailing only Hall of Famer Tim Brown’s 19 in 1997.

As well as the offense has performed, the defense has been a work in progress. The Raiders are allowing 6.66 yards per play, third worst in the league, while generating only one takeaway and one sack. Nicholas Morrow got the key interception late in the first half against Drew Brees but that unit will need to play better if the Raiders want to contend.

Daniel Carlson. After setting a Raiders record by making 94.1% of his kicks as a rookie in 2018, Carlson struggled last season. He converted just 73.1% of his field goals, missing 6 of 12 from 40 yards and beyond. Carlson appears to have regained his form. He made a career-long 54-yarder in the opener and then matched that against the Saints with a kick that made it 34-24 with 1:05 to play. Had he missed that kick, the Saints would have had the ball at their 44, needing a touchdown to tie.

Henry Ruggs III. The speedy rookie receiver has been mostly a decoy since an impressive first half of his debut against Carolina. In his past six quarters, Ruggs has one catch for 4 yards on three targets. Ruggs did draw two pass interference penalties, including a 29-yarder that set up the game-sealing field goal.

LG Richie Incognito left in the first half with an Achilles injury and was replaced by rookie John Simpson. ... The Raiders were already playing without their top two right tackles in Trent Brown (calf) and Sam Young (groin).

3. The Raiders had back-to-back games with three or fewer penalties for just the second time since 1991. They also did it in 2009. A franchise that has traditionally been among the most penalized has the second-fewest penalties in the league with six. The Raiders are also tied for second in most penalties and yards penalized for their opponents.

The Raiders travel cross-country to play the New England Patriots. The Raiders were 1-6 the previous three seasons in early starts in the Eastern time zone before winning at Carolina in the season opener.