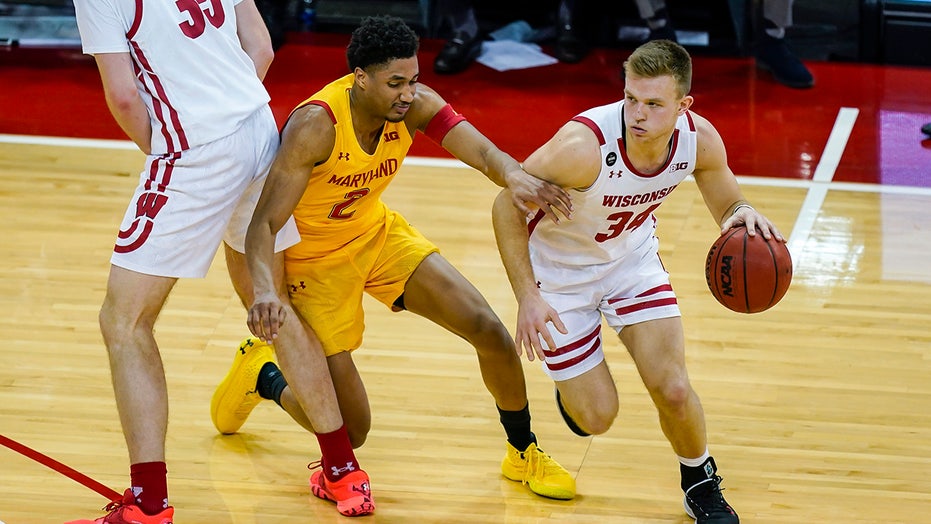 Wisconsin coach Greg Gard's favorite saying of late has been, “Gritty, not pretty.”

The Badgers needed every second on Tuesday to pick up their grittiest win of the season.

Brad Davison hit a 3-pointer with 11 seconds left after getting a steal and Wisconsin beat No. 17 Maryland 56-54 on Tuesday night, its third straight victory against a ranked opponent.

“Those are kind of shots that you dream about and you think about," Davison said. "I'm very thankful for the opportunity to see the ball drop. But most importantly, that's a big win for this team."

The Badgers trailed 54-51 with 1:31 to go. Reuvers made a jumper to bring them within one. Davison then stole the ball, called a timeout and then sunk a 3 to put the Badgers ahead with 11 seconds to play.

“The kid's a winner. He just makes winning plays.” Gard said of Davison.

After a timeout by Maryland, a 3-point attempt by Anthony Cowan Jr. clanked off the rim.

“I felt like we were going to win the game the whole time in the second half,” Maryland coach Mark Turgeon said. “But I do feel better about our guys today than I did Friday night.”

Jalen Smith scored 18 points and Cowan had 16 for the Terrapins (13-4, 3-3), who have lost two straight after winning three in a row. Maryland suffered an 18-point defeat Friday at Iowa.

Cowan, who averaged 17.8 points and 3.5 assists in his four previous games against the Badgers, scored nine in the second half, but it wasn't enough. He now has scored at least 16 points in 10 of his last 13 games.

Cowan and Smith scored the first baskets of the night for Maryland, but Wisconsin countered with a 9-0 run. The Badgers led by as many as eight in the first half and took a 30-25 advantage into the half. The Terrapins shot 36% (9 for 25) from the field before intermission. Potter and Reuvers each had nine points in the first half.

Maryland must pick up the pieces quickly. The Terrapins head back home to take on a Purdue team that defeated No. 15 Michigan State 71-42 on Saturday.

Wisconsin now leads the all-time series with Maryland 10-6, including a 5-1 mark against the Terrapins at home.

Wisconsin: At No. 15 Michigan State on Friday.