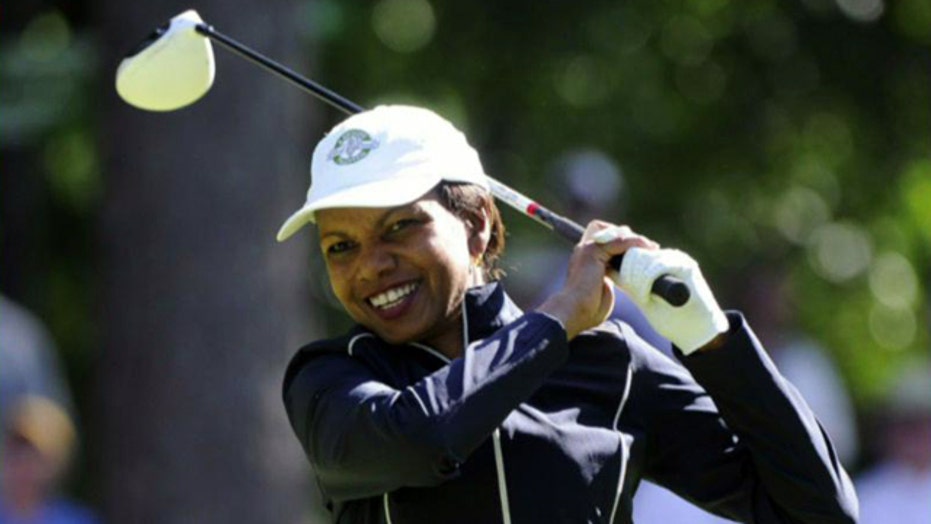 AUGUSTA, Ga. – The men in green jackets could barely contain themselves, sitting there smugly as if they had done something to transform the game of golf. Augusta National now has women members and, if it was a long time coming, they now seem to think it's the best addition to the Masters since flowering azaleas were planted on the back nine.

Condoleezza Rice surely agrees, though for now she's not saying. The former secretary of state avoided reporters Wednesday as she made her way around the Par 3 contest, smartly attired in a tailored green jacket over a tan skirt.

Rice and South Carolina financier Darla Moore are trailblazers in a way, though few outside of golf would confuse their admittance last August to one of the most exclusive clubs in the world to be on a par with some of the great equality battles of the last century.

Indeed, the guardians of Augusta National hardly qualify as visionaries. For years the only places for black people at the club were waiting on tables or carrying the bags of members, and the concept that women could actually be members didn't take hold until more than a decade after Martha Burk tried futilely to rally support for the cause.

Now that they're here, though, things couldn't be peachier. Seems the fears of women running amok on the perfectly green fairways of Augusta National were, shall we say, a bit overblown.

"These two ladies have been very special and it's just been delightful," Payne said.

They might have been a decade ago, too, but the green jackets are a stubborn bunch when it comes to changing the traditions that have served them so well. Former chairman Hootie Johnson famously dug his heels in when challenged by Burk, writing her at the time that Augusta National might someday admit women "but that timetable will be ours and not at the point of a bayonet."

The timetable apparently called for women in 2012, and luckily a few of them were available. They managed to snare a prominent name in Rice, and as an added bonus put to rest any lingering controversy over the membership of America's most famous golf club.

They could have gone further, but didn't. On a day when Payne talked about girls and boys putting and chipping on the 18th green the Sunday before next year's tournament and a day before a 14-year-old from China tees off in the Masters, he also spoke about Augusta National becoming "a beacon in the world of golf" and doing its best to influence others in the game.

Except, of course, the green jackets have no plans of doing any of that. In his annual pre-Masters press conference, Payne refused to give a position on belly putters, declined to take a stand on smoking on the golf course, and wouldn't even discuss details of Augusta National's new corporate party complex.

And if you think a delegation from Augusta is going to travel to Scotland to urge members at all-male Muirfield — host of this year's British Open — to also enter the modern world and accept women, well, think again.

"I think they should do what they want to do, and I would not interject the way I feel on the issue," Payne said.

More like a flashlight than a beacon, but that's OK. Golf fans, for the most part, don't care who wears the green jackets, or who sets the rules. They just want to watch Tiger Woods and Phil Mickelson battle it out on the back nine on Sunday in the major that means the most.

Augusta National handled the issue of women members the way it wanted to, and if it took them longer than it should, well, the green jackets aren't entirely to blame. Those playing in the Masters never dared — or cared — to push the issue, and there was certainly no outcry among golf fans lucky enough to wander around Amen Corner.

Was it wrong to exclude half the population because of gender? Yes, but the idea that Augusta National is some sort of democracy should have been put to rest about the time Bobby Jones and Clifford Richards built the place during the Great Depression.

Did it qualify as one of the pressing social issues of our time? No, because pretty much the entire other half of the population that is not female had no chance of becoming members, either.

Inside the gates they can be heavy handed, overbearing and simply wrong on many issues. It's a different world, one we're privileged to be invited to visit only one week a year — and only as long as we toe the company line.

They do have plenty of things to be proud of over the years. Admitting a few token women isn't one of them.

Tim Dahlberg is a national sports columnist for The Associated Press. Write to him at tdahlberg(at)ap.org or http://twitter.com/timdahlberg