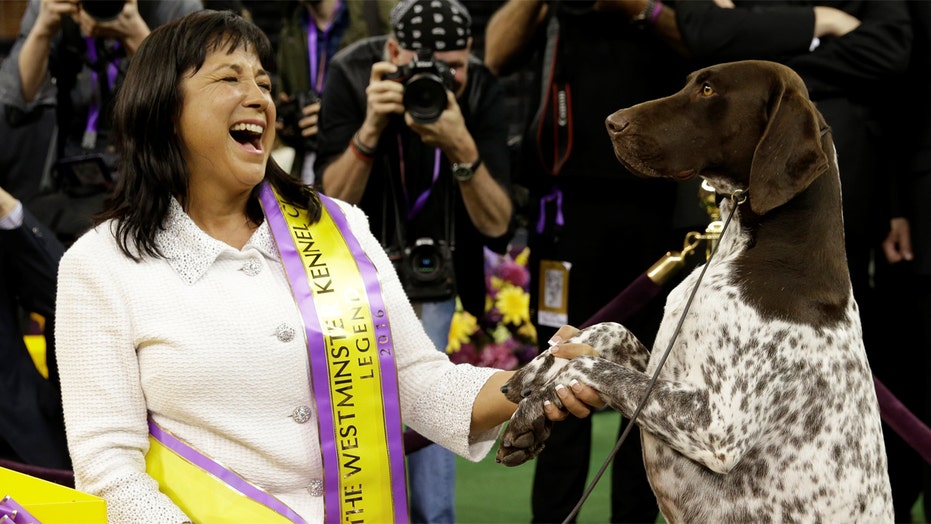 CJ's win was the third for the breed since the Best In Show prize was first awarded in 1907. His grandmother, Carlee, was the last German Shorthaired Pointer to take the prize, in 2005.

As judge Dr. Richard Meen from Canada began to announce his choice, German shepherd handler Kent Boyles took a step toward the prized silver bowl. He heard "German" and the "sh" to start the second word, but that was as far as he got.

As Meen studied each of the final seven dogs, he held up his hands like a picture frame to focus on their expression.

CJ "took me back into the past for what they were bred to do," Meen said. "He floated around the ring beautifully."

There is no prize money for the win, but there are valuable breeding rights in the near future and a legacy in dogdom forever.

The fan favorite earlier in the night was a large Leonberger, who wanted a treat and kept gnawing at his handler's suit pocket all the way around the ring.

This was the 18th overall best in show win for CJ, whose initials stand for California Journey, a reference to his West Coast roots.

"He has that extra sparkle," handler Valerie Nunes-Atkinson said earlier in the day. "He's an old soul."

In all, 199 breeds and varieties of dog were represented at the show, held at New York's Madison Square Garden. Nunes-Atkinson became the first owner, breeder and handler to win Westminster since 1983.