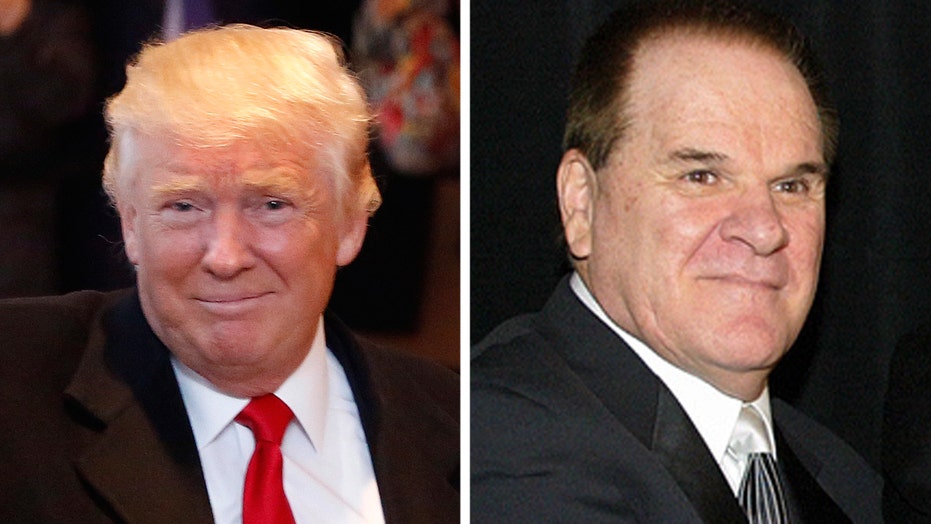 Rose, aka Charlie Hustle, who played with the Reds from 1963 until 1979, posed in front of his statue – which depicts Rose in his iconic headfirst slide. He signed as a free agent with the Philadelphia Phillies prior to the 1979 season, and played his final three seasons of his career, 1984 through 1986, with the Reds.

On Saturday, on a sizzling 90-degree day, thousands of fans packed the entrance to Great American Ball Park to see Rose tug on the edge of a tarp, slowly revealing a bigger-than-life sculpture.

Rose was joined by fellow members of the Big Red Machine, including Hall of Famers Johnny Bench, Tony Perez and Joe Morgan, all of whom have stadium statues.

"It's just an honor to be on the same block with these guys," said Rose, who is banned from Cooperstown because he bet on baseball. "This has to be the ultimate goal for any player of his or her sport."

During a media availability, Rose addressed the strained relationship he once had with Bench, who was inducted into Cooperstown in 1989. Rose noted that baseball's investigation of his gambling consumed that summer and overshadowed Bench's big moment. Rose said he would have been upset, too.

"Believe me, I didn't ask for that investigation," said Rose, who denied for years that he had bet on baseball before finally acknowledging that he had.

Rose said the two of them have a good relationship. Bench agreed, teasing him about their failed partnerships in a bowling alley and a car dealership.

'If that don't make any sense, you can go to hell.'

Rose also took issue with suggestions that the Reds spend too much time honoring the Big Red Machine that won World Series titles in 1975-76. Rose said that honoring those teams and players also honors the franchise.

"If that don't make any sense, you can go to hell," Rose said.