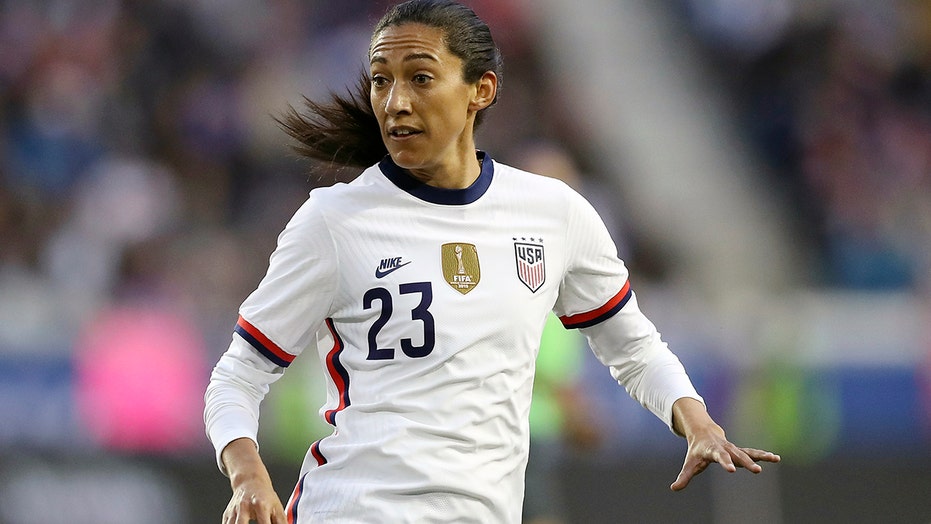 With her usual No. 23 jersey already claimed, Christen Press had a decision to make when she joined Manchester United.

It was a quick call.

“I picked 24,” the United States forward said on a video call. “It was a best of the bunch and obviously has a history to that number as well."

History immersed in grief — in a year that began with former Los Angeles Lakers No. 24 Kobe Bryant dying in a helicopter crash at the age of 41.

“When I wasn’t able to wear my normal number, I definitely chose this (24) with a little nod to Kobe, because I’m an LA girl,” Press said. “Everywhere we went, they were crazy for Kobe and the amount of inspiration and joy that he gave people by the way he played with his passion is amazing. And, it’s something that as athletes we’re all striving to do.”

More significant than the number on her Red Devils jersey is where she will play in Casey Stoney's front line.

“For most of my career, I would have said I’m a nine,” Press said, referencing the traditional jersey number for a center forward. “It’s where I was trained to play ... but in the last three years of my life, both at club and country, I have played wide. I’ve played primarily in the 11 and I would say I’m very comfortable there as well.

The 31-year-old Press has signed up for a season in the Women's Super League away from the Utah Royals. Her previous experience overseas — apart from in a U.S. career that has seen her score 58 goals in 138 appearances — has been at Swedish clubs Göteborg FC and Tyresö FF.

United only reformed its women’s team in 2018 after 13 years and has started its second season in the WSL by collecting four points from a possible six. The northern English club is part of the Glazer family investments that includes the NFL's Tampa Bay Buccaneers.

“What you hope is that it inspires the next club and that’s how the global game moves forward.”

With the American domestic season disrupted by the coronavirus pandemic, Press is part of a wave of talent that has moved across the Atlantic to play in England.

In London there is Alex Morgan at Tottenham who, like Press, scored in the 2019 World Cup semifinal win over England.

Three other compatriots who featured in the game in Lyon have moved to Manchester, with Rose Lavelle and Sam Mewis at City, and Tobin Heath for company at United.

“I’m reluctantly accepting that I’m a veteran player and that I’m now one of the oldest players on the team, but younger than Tobin," Press said. "We’re here to fight for titles. I think what we’ll be able to bring is just like a relentless mindset towards that.”