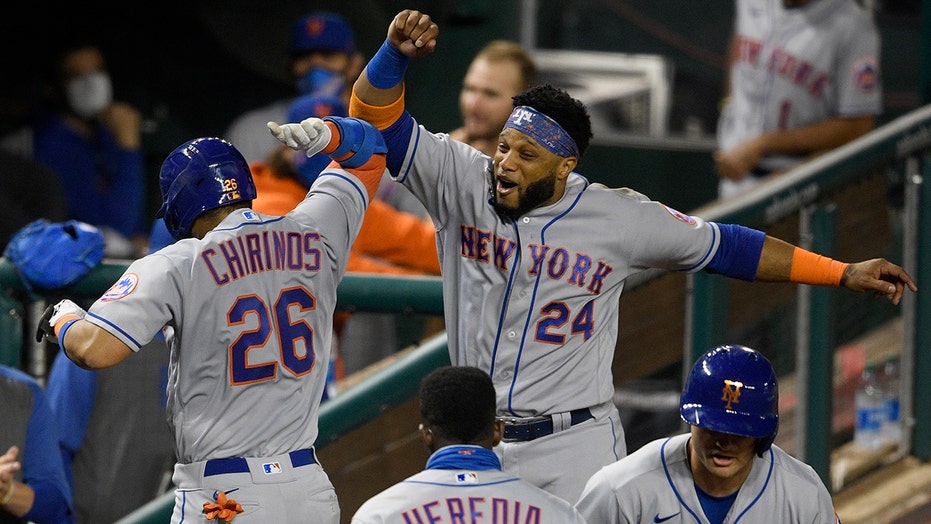 David Peterson (6-2) closed his rookie season with his longest outing, going seven innings and allowing four hits and one run while striking out four. He leads New York in victories with two more than ace Jacob deGrom. Peterson is in line to become the sixth rookie ever to lead the Mets in victories and the first since Dillon Gee in 2011.

“Hopefully, it’s not over,” Peterson said. “Hopefully, we can finish strong and see what happens. It’s been a good experience for me.”

Justin Wilson worked the eighth, and Edwin Diaz gave up a two-out, RBI single to Yadiel Hernandez in the ninth but escaped further trouble for his sixth save.

Chirinos, acquired from Texas on Aug. 31, began the day hitting .149 with no homers and four RBIs in 67 at-bats between his two stops this season. But he belted a two-run homer off Washington starter Patrick Corbin (2-7) in the fifth, then legged out a two-out, RBI infield single an inning later to give the Mets a 3-1 lead.

“Hopefully, we have a chance to get to the postseason,” Chirinos said. “I know there’s a lot of stuff that needs to happen, but we can only do what we can control.”

Corbin threw a season-high 113 pitches over seven innings, yielding 10 hits and three runs while striking out three. Corbin was 0-5 with a 5.64 ERA in five September starts but did go at least six innings in each of his last three outings for the Nationals, who were eliminated from the playoffs Wednesday.

“This is just such a strange season,” Corbin said. “I’m starting to feel good, or at least feeling better, trying to build up and now it’s the last start of the year. Obviously, I think a lot of us wanted things to go differently. But you try to look at some positives. Finishing on a strong note and ending the season healthy was definitely a big thing for me.”

Mets: New York placed OF Michael Conforto (left hamstring tightness) on the injured list, ending his regular season. Conforto was hitting a career-high .322 with nine home runs and 31 RBIs. He entered Thursday sixth in the National League in on-base percentage (.412), tied for eighth in runs (40) and ninth in batting average. … INF Luis Guillorme was recalled to take Conforto’s roster spot.

Nationals: 3B Carter Kieboom said he does not anticipate requiring surgery for his bruised left wrist. Kieboom was injured when he was hit by a pitch Monday and was placed on the injured list the next day.

Despite his team’s elimination from postseason contention, Washington manager Dave Martinez intends to point out to his players what they’ve accomplished in the recent past.

“I’ll remind them that other than not making the playoffs this year, we did win the World Series in 2019,” Martinez said. “That means a lot. That doesn’t go away. Let’s come back in 2021 and do it again.”

Then he pointed to a massive ring on his right hand. “I have this to remind me, too, by the way,” Martinez said.

Mets: RHP Rick Porcello (1-6, 5.46 ERA) has struggled in his first season with New York, but his only victory came at Washington on Aug. 5 when he allowed one run in seven innings.

Nationals: RHP Max Scherzer (4-4, 3.67) would finish with a winning record for the 11th consecutive season --- tying Los Angeles Dodgers lefty Clayton Kershaw for the longest active such streak --- if he beats the Mets in his final start of 2020.