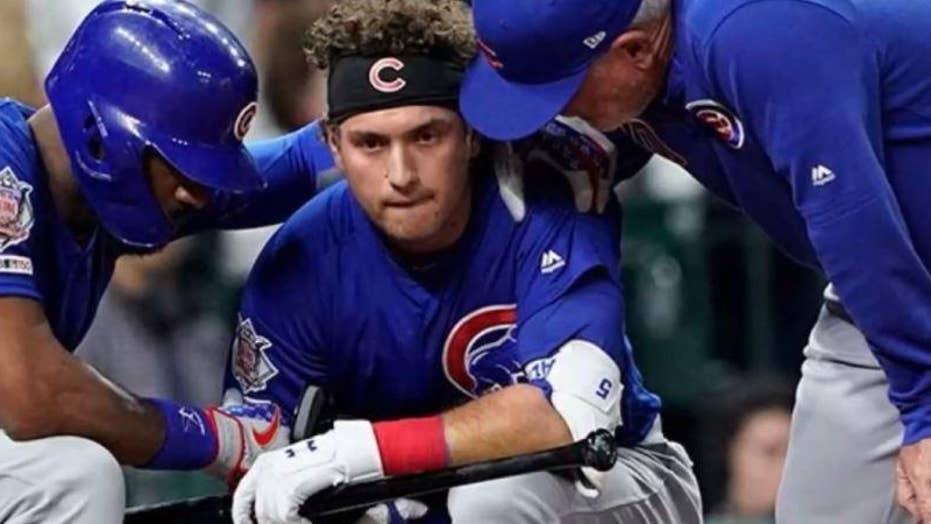 A small child was rushed to medical attention Wednesday night after apparently being struck by a foul ball during a Cubs-Astros game in Houston.

Play was halted during the fourth inning after the ball – off the bat of Cubs hitter Albert Almora Jr. – apparently hit a young girl, the Houston Chronicle reported.

CHICAGO CUBS UNSURE WHETHER BEN ZOBRIST WILL RETURN THIS SEASON: 'OBVIOUSLY, WE WILL MISS HIM'

Chicago Cubs' Albert Almora Jr., center, takes a knee as Jason Heyward, left, and manager Joe Maddon, right, talk to him after hitting a foul ball into the stands during the fourth inning of a baseball game against the Houston Astros Wednesday, in Houston. (Associated Press)

A man was seen carrying the child out of the seating area, while replays showed that Almora seemed to instantly know that the ball had struck a spectator.

Almora was later seen distraught on the field and photos posted online showed him being consoled by a security guard as well as Cubs manager Joe Maddon and another Cubs player.

"Albert is an emotional young man with children, so that made it even more real to him," Maddon told the Associated Press after the game. "I understood exactly what he was going through right there."

The game was halted for a short time as the girl was taken away for treatment. Players on both teams seemed shaken up by what happened.

Almora spoke about the incident with reporters after the game. He said he quickly saw where the ball went and who it had struck.

"Just the way life is," he said. "As soon as I hit it, the first person I locked eyes on was her."

Almora said he was receiving information about the girl's condition but was asked not to share the information.

"Right now I'm just praying and I'm speechless," he told the Associated Press. "I'm at loss of words. Being a father, two boys ... but God willing I'll be able to have a relationship with this little girl for the rest of my life. But just prayers right now and that's all I really can control."

The Astros issued a statement after the game saying the girl was taken to a hospital, but no further information was provided.

Houston's Sports Talk 790 radio station later reported that the child was conscious and responsive and was expected to be OK.

Houston's Minute Maid Park, like all MLB stadiums, has netting around the home plate area and extending toward the dugout areas to protect fans from foul balls. But the AP reported that the young fan was seated about 10 feet past the area where the netting ends.