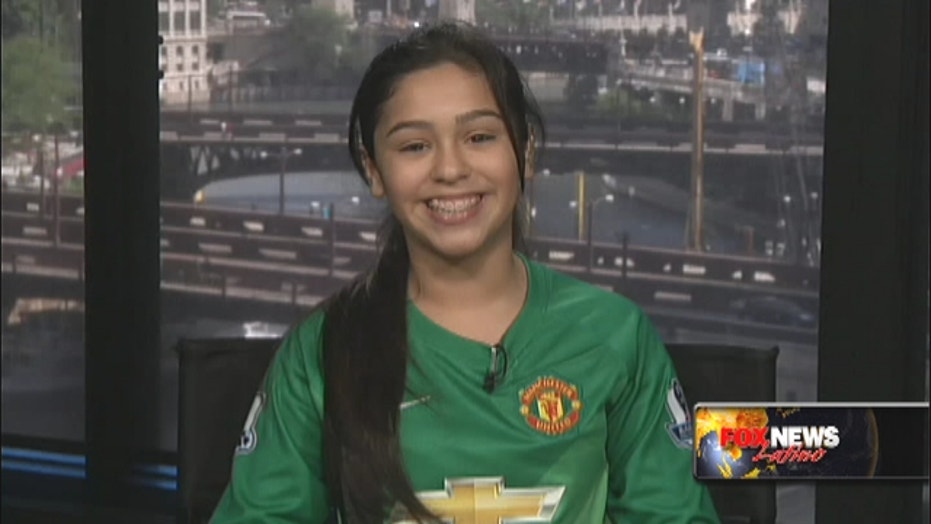 Jasmine Padilla, 11, got to walk out onto the field at Old Trafford Stadium accompanying a Man United player thanks to a Chevrolet promotion.

Imagine walking into a stadium and have 75,000 people screaming and clapping.

Not only is that what Jasmine Padilla, 11, imagines whenever she plays soccer, it's something she got to experience when she went to Manchester United’s historic Old Trafford Stadium as one of the 11 kids to accompany Manchester United players at their season opener against Swansea City on Aug. 16.

She won the honor by beating out hundreds of entrants from around the world in Chevrolet’s “What Do You #PlayFor” campaign.

“I heard about it at my [soccer] school, Beyond the Ball, and they told us that if you guys are interested, you go to England, meet the players, and I was like, ‘I want to join,’” Padilla told Fox News Latino. “My mom never believed [she would win], but I thought I was going to win.”

And win she did. Padilla jetted off to England to spend a couple of days with the players and at the club’s elite youth academy. She got to meet her favorite player, Javier “Chicharito” Hernandez – who has since been loaned out to Real Madrid.

But the highlight for the tween was walking onto the pitch hand-in-hand with Manchester United goalie David De Gea.

“It was amazing – walking down with the player and shaking hands with Swansea players,” Padilla said. “You felt important walking onto the field with everyone looking at you.”

Before the players – which included the likes of Wayne Rooney, Juan Mata and Padilla’s favorite Chicharito – took to the field, they had a small surprise for their mascots: they exchanged jerseys with children’s names on them.

Padilla had a small inkling of it because she noticed De Gea had her name on his back, while she had his.

The 11-year-old said she is a much bigger fan of Manchester United now than she was before this trip.

In the end, she only had one word to describe it all: “Amazing.”