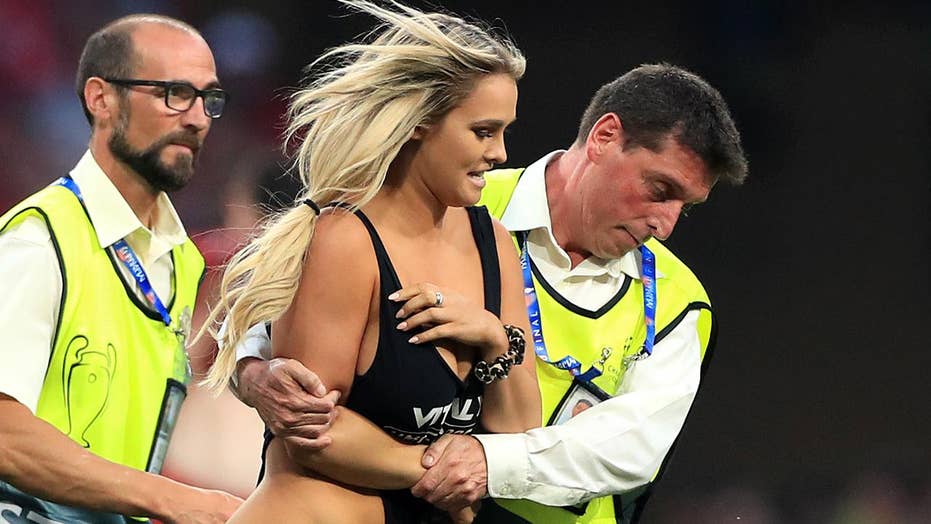 Swimsuit model who streaked across the field during Champions League final gets special souvenir according to her Twitter.

The streaker who disrupted the Champions League final in Madrid says she has no regrets – and believes the prank will help her retire at 30.

Now, after being arrested and spending five hours locked in a Spanish jail cell, the American model reckons the stunt was the smartest move of her career.

Kinsey, from Los Angeles, said: “By the time I’m 30 I plan on making enough money to retire, and streaking at the Champions League will only help me achieve that.

“I plan to do a lot more streaking to raise my profile.

“The response has been unbelievable, I couldn’t be happier. It was the biggest thrill of my life.”

Kinsey Wolanski invaded the pitch and was taken away by security during the Champions League final soccer match between Tottenham Hotspur and Liverpool. (Photo by Matthias Hangst/Getty Images)

She claims she received messages from players who started following her.

She said: “I’m not revealing any names, but a couple of the Liverpool players did send me private flirty messages after I streaked the game. One sent some heart emojis and the other one a message saying, ‘I saw you at the game’.

CHAMPIONS LEAGUE STREAKER SHARES FAN-CREATED VIDEO OF HER SCORING GOAL: 'I DID IT AGAIN FOLKS'

I honestly didn’t even know who they were until I clicked on their profiles. I didn’t respond though as I already have a boyfriend.”