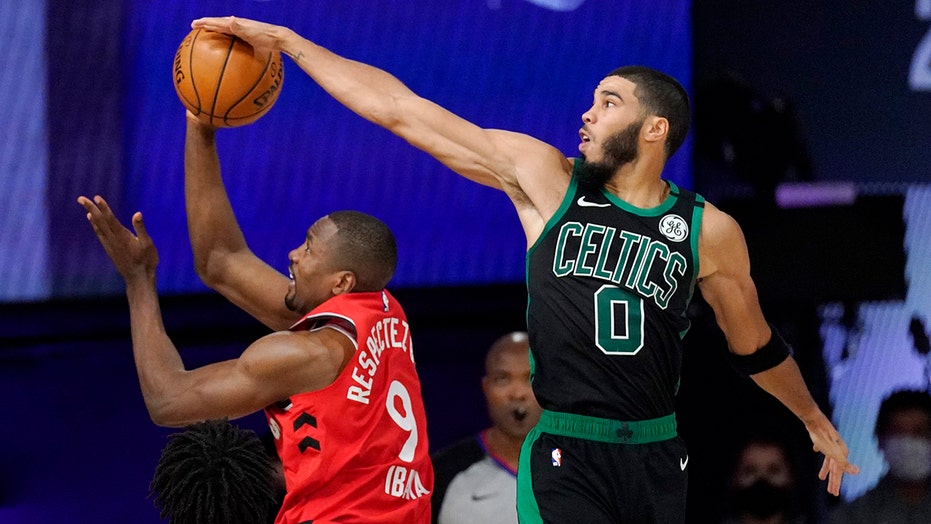 Kyle Lowry is obviously aware that the Toronto Raptors must win the next two games to get back to the Eastern Conference finals.

He doesn’t want the Raptors thinking past Wednesday, however.

The season is on the line for the reigning NBA champions, who trail the Boston Celtics 3-2 in their Eastern Conference semifinal series and face a win-or-go-home Game 6 matchup on Wednesday night. The Celtics controlled start to finish on the way to a 111-89 win in Game 5, putting the Raptors on the brink.

Lowry said the Raptors can’t be thinking about winning two games. Game 6, he said, is all that matters.

“We’ve just got to work on one,” Lowry said. “I’m very confident in our group. Our group is very tough-minded, tough-spirited and we’re a good team. We know what we’ve got to do. We’ve got to take one game at a time, one possession, one minute, one second at a time and just go out there and play.”

The Celtics are 6-3 against the Raptors this season, with four of those wins coming by at least 15 points. Celtics guard Kemba Walker was “checking hearts” before Game 5 — he did so by slapping teammates in the chest before they took the court — and the person dubbed “Cardiac Kemba” had to like what he saw as Boston reclaimed the lead in the series.

“I know what we’re capable of,” Walker said. “We’re capable of playing hard. That’s a skill. A lot of guys on that team have that skill and have that ability. So, I checked my guys’ heart. We showed it. Big time.”

In the Western Conference, it’s Game 4 on Wednesday of the semifinal matchup between the Los Angeles Clippers and Denver Nuggets.

The Nuggets led 97-90 in the fourth quarter before things fell apart and the Clippers prevailed 113-107 to take a 2-1 series lead. The series outlook for Denver might have changed as quickly as the weather in Denver: It was 91 degrees there on Monday, and snow showers were falling on Tuesday.

“We should have won the game,” Nuggets coach Michael Malone said.

Paul George led the Clippers with 32 points — but noted that defense always tells the tale at this time of year.

“We’re not a perfect team by any means,” George said. “This game is made on stretches. One team gets hot, gets going. Other team rallies back. But this game is always predicated on whoever plays defense first, wins.”

A look at Wednesday’s games:

— NEED TO KNOW: The Celtics are on the brink of making the Eastern Conference finals for the third time in four years, and if they get there this time LeBron James won’t be standing in their way. This is the fifth time that Boston has started a postseason run 7-2 or better through nine games; the other four instances were in 1961, 1964, 1969 and 1986, and the Celtics went on to win the NBA title in each of those seasons.

— KEEP AN EYE ON: Kyle Lowry. The Raptors’ point guard said several times after Game 5 that he had to be more aggressive in Game 6. Expect him to try to set a tone early and put Toronto on his back, as he’s done so many times before.

— PRESSURE IS ON: Toronto, obviously. The reign could end Wednesday.

— NEED TO KNOW: This is the 19th time that Kawhi Leonard has played for a team-leading after three games of a playoff series; those clubs have gone on to prevail 14 times in the previous 18 instances. He’s got the Clippers two wins away from what would be the first trip to the conference finals in franchise history — but his sixth trip there in the last nine seasons.

— KEEP AN EYE ON: Paul George was awful in Game 4 of the first round, shooting 3 for 14. In five games since, he’s shooting 49% and averaging 24.6 points for the Clippers. When he plays like this, the Clippers are so much tougher to beat.

— INJURY WATCH: Denver’s Nikola Jokic, playing with a sprained wrist, put up 32 points, 12 rebounds, and eight assists in 39 minutes in Game 3. It doesn’t seem like he’s that bothered.