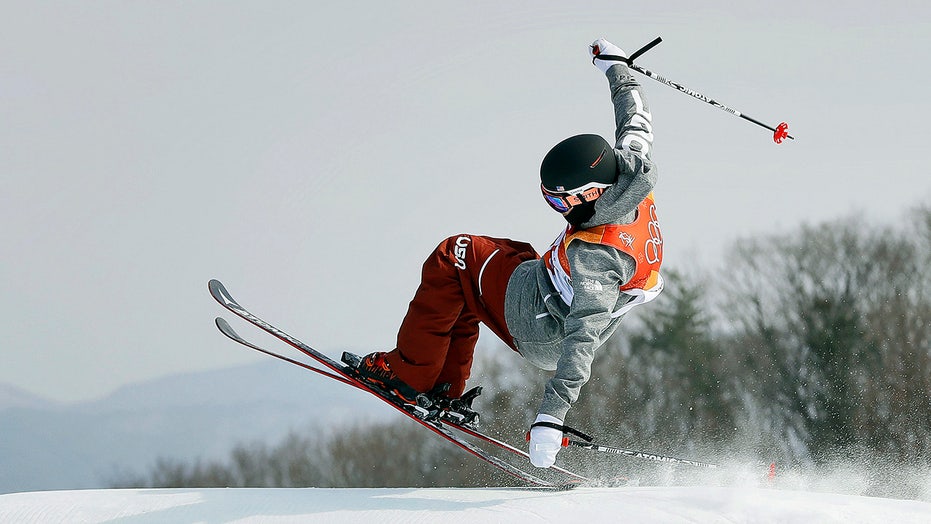 Freestyle skier Gus Kenworthy hasn't had much time to rehearse and practice new tricks heading into the Winter X Games this weekend.

That's no line, either. He's just been too busy memorizing them.

The 2014 Olympic slopestyle silver medalist is one tough act to follow as his talents have him starring in a variety of roles on and off the slopes.

These days, he's an actor (recently appearing in “American Horror Story: 1984” ), gay-rights advocate (he came out in 2015) and friend to animals ( rescuing puppies at the last two Winter Games ). Of course, he's also an innovative slopestyle/halfpipe competitor who recently switched from competing for the red, white and blue to representing Britain (to honor his mom).

"I'm always trying to expand my horizons," said Kenworthy, a five-time Winter X Games medalist who will compete in the slopestyle and superpipe competitions this weekend in Aspen, Colorado. "Just enjoy all the different things that I like to do.”

Now if he just had more time to practice. His schedule, though, is that crammed.

He hasn't really pushed the boundaries on news tricks since at least March. In an Instagram entry dated Jan. 11, he posted a photo of himself in the halfpipe and quipped: “Back in the office and while the temperature is negative my attitude is... also pretty negative.”

Kenworthy announced last month his decision to switch from representing Team USA to skiing for Britain. Really, it was a resolution a long time in the making.

Born in the United Kingdom and raised in Telluride, Colorado, he's felt a pull of loyalty toward both nations. So much so that he mulled over who to represent leading into the 2014 Sochi Games, where he captured a silver in the Olympic debut of slopestyle as part of an American sweep. He contemplated it again four years later in Pyeongchang.

But leading into the 2022 Games in Beijing, he felt the timing was right to change.

"I was a little nervous because I wasn't sure how people were going to take it," Kenworthy said. "But everyone seems supportive."

His close-knit relationship with his mom played a role in his nationality change. It was a chance to show his appreciation for his British-born mom and all she's done for him.

“She used to drive me to the mountains and she would drive to minuscule competitions,” the 28-year-old Kenworthy said. "I fell in love with the sport with her. She's been at my competitions screaming and waving an American flag — and she's not an American. I want to pay her back and ski for G.B.”

The world was introduced to Kenworthy after he won his Olympic silver medal in 2014 and adopted several stray dogs he encountered while in Russia. He received all the praise and was portrayed as the pet-loving heartthrob.

Only, the person who did most of the hard work with the dogs, which included staying behind in Russia for more than a month to get them back to the U.S., was his boyfriend at the time.

More than a year later, Kenworthy revealed to the public that he was gay. Ever since, he's become more assured about who he is — on the slopes and off.

"I feel proud that I get to live my life authentically and honestly,” he said.

At the 2018 Pyeongchang Games, Kenworthy didn't medal but had another memorable Olympic moment for the LGBTQ community. Social media erupted when a screen grab from NBC showed Kenworthy kissing his boyfriend at the time, actor Matthew Wilkas, before the competition.

“I'm very proud of where I am and who I am, and I think it's sort of all because I took a leap of faith by coming out in a public way,” said Kenworthy, who helped raise around $250,000 last summer by participating in AIDS/LifeCycle, the charity bike ride from San Francisco to Los Angeles. “I get to live my truth now.”

While in South Korea, he teamed with Humane Society International to rescue puppies from a dog-meat farm. He ended up bringing home a dog he named Beemo, who died suddenly that May of a preexisting heart condition. He later adopted another named Birdie, a Korean Jindo mix that was part of a litter that was born while he was there. The dog captured his heart. Birdie even has its own “sponsor” — a healthy pet-food company called Nulo.

"Birdie was a puppy on a dog-meat farm and now she's on a billboard in Times Square for a dog company," he said. “Her story is cooler than mine.”

He did theater as a kid and has had some small cameo appearances ("Sharknado 5: Global Swarming"). But his big break arrived when he was cast in the ninth season of the FX horror anthology “American Horror Story.”

He played the athletic-looking character named Chet Clancy in episodes that began airing in September. The plot as described on the FX website: "Five friends escape Los Angeles to work as counselors at Camp Redwood. As they adjust to their new jobs, they quickly learn that the only thing scarier than campfire tales is the past coming to haunt you.”

Stepping into this sort of role presented a new kind of nerves for Kenworthy.

"The first two days, the first couple of scenes that we shot, I was pretty uncomfortable because it was like really being thrown in the deep end," Kenworthy explained. "And it just got easier and easier. By the end, I felt quite comfortable and really was loving it."

As for his next act, it's still in the planning stages.

"I'm always thinking about the next trick, the next move, the next opportunity," Kenworthy said. “I have a very hard time staying still.”