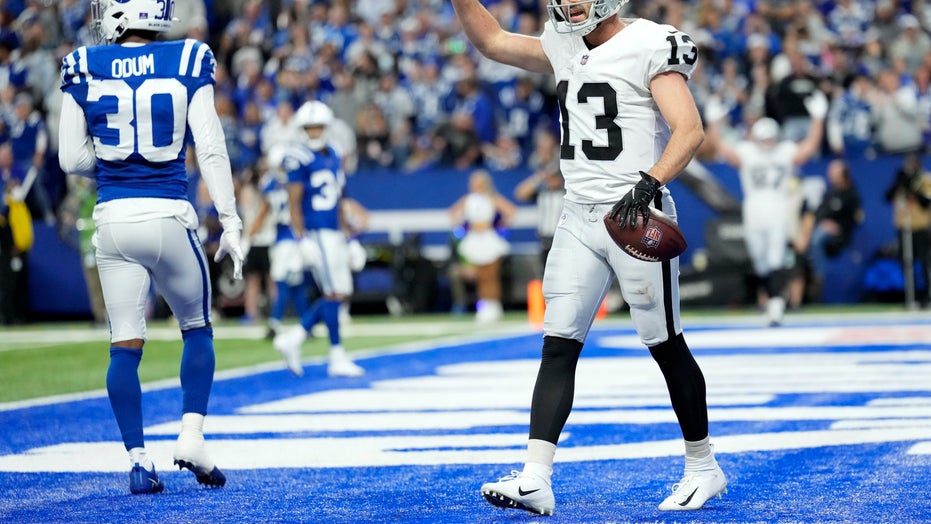 After Michael Badgley kicked a tying 41-yard field goal for Indianapolis with 1:56 left, Carr and the Raiders got the ball back at their 25 after a touchback. Carr found Hunter Renfrow for 24 yards on third-and-10 in the final minute, setting the stage for Carlson's third field goal of the game.

Carr passed for 255 yards and a touchdown for Las Vegas (9-7), and Zay Jones had eight receptions for 120 yards.

Rallying after an embarrassing email scandal that led to coach Jon Gruden's resignation, the Raiders can wrap up an improbable playoff spot with a victory over the Los Angeles Chargers next weekend.

Indianapolis (9-7) had won three straight and eight of 10 to move one win away from a postseason berth. But it couldn't hold a second-half lead against Las Vegas.

Taylor finished with 20 carries for 108 yards and a touchdown. The NFL's leading rusher broke Edgerrin James' single-season franchise record of 1,709 yards rushing on a 9-yard carry midway through the third quarter. He has 1,734 yards to go with one game left in the league's first 17-game season.

Carson Wentz was 16 of 27 for 148 yards and a touchdown, shaking off a slow start after he spent much of the week on the COVID-19 reserve list.

Indianapolis grabbed its first lead of the game on a fluke play on its first possession of the second half.

On first-and-10 at the Las Vegas 45, a scrambling Wentz threw the ball into a crowd at the goal line. Wide receiver Ashton Dulin and defensive backs Casey Hayward and Tre’von Moehrig all went up to make a play, and the ball popped up before landing in the arms of T.Y. Hilton for a 17-13 lead.

Hilton took a bow in the end zone after perhaps the easiest of his 53 career receiving touchdowns.

The Raiders went back in front on Carr's 11-yard touchdown pass to Renfrow on fourth-and-2 with 11:18 left in the fourth. Carr scrambled to his right before throwing to an open Renfrow in the end zone.

Las Vegas got off to a fast start, marching right down the field after the opening kickoff. Jacobs' 2-yard TD run capped a 12-play, 75-yard drive that lasted more than seven minutes.

The Raiders had a 10-3 lead late in the first half when a couple of mistakes helped keep the Colts in the game.

First, rookie guard Alex Leatherwood was flagged for a false start on third-and-1 at the Indianapolis 10. After a Carr sack and a Colts timeout, Las Vegas settled for a 44-yard field goal by Daniel Carlson with 1:47 left.

Then Carlson's kickoff went out of bounds, handing Indianapolis the ball at its 40. Wentz promptly directed the Colts to Taylor's 1-yard TD run with 1 second left, trimming the Raiders' lead to 13-10 at the break.

The Raiders played with a small "JM" sticker on the back of their helmets to honor Hall of Fame coach John Madden, who died this week at age 85. Madden coached the Raiders to a win in Super Bowl 11.

A pregame tribute video drew a big cheer from the crowd, and there was a moment of silence in Madden's memory.

Colts: Close out the regular season at Jacksonville next Sunday.