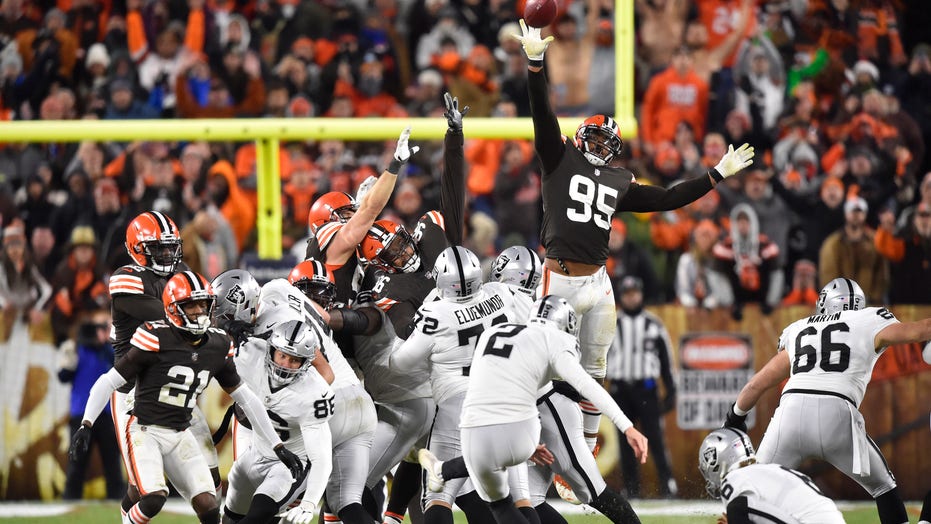 The Raiders didn't appreciate the NFL postponing their trip. They made sure their postseason chances weren’t canceled as well.

Daniel Carlson's 48-yard field goal as time expired sent Las Vegas to a 16-14 win on Monday night over the COVID-19-depleted Cleveland Browns in a game pushed back two days by the NFL amid an uptick of virus cases across the league.

Down by a point, quarterback Derek Carr patiently drove the Raiders (7-7) into Cleveland territory in the final two minutes.

Then Carlson shrugged off being iced by the Browns to boot his winner, keeping Las Vegas in the playoff mix. The Raiders had been upset with the league's decision to delay the game from Saturday until Monday, with owner Mark Davis saying the delay was a "competitive disadvantage" for his his team.

That all seemed to be forgotten as the Raiders danced off their sideline when Carlson's kick went through at the Dawg Pound end of FirstEnergy Stadium.

"It's been a long time coming to win a game like that in the end," said Raiders interim coach Rich Bisaccia, who has led the team through a turbulent season. "We understand the situation we're in and what the playoff race looks like."

The loss was devastating for the Browns (7-7), who would have vaulted into first place in the AFC North with a win. Instead, they fell into last place in the tightly packed division with three games remaining.

Due to a virus outbreak, the Browns were without quarterback Baker Mayfield, coach Kevin Stefanski and several other prominent players, including top receiver Jarvis Landry and edge rusher Jadeveon Clowney.

Cleveland third-string quarterback Nick Mullens had brought the Browns back from a 10-0 deficit in the third quarter and given them a 14-13 lead by throwing a 6-yard touchdown pass on fourth down to Harrison Bryant with 3:45 left.

And after Greedy Williams intercepted Carr, it appeared the Browns were on their way to taking their roller-coaster season to new heights. But Cleveland couldn't come up with a first down and gave the ball back to Carr with 1:50 left.

"After that interception, I told the guys ‘Please, I promise we’ll win it, just get the ball back,'" Carr said.

He then led a 51-yard drive, completing two long passes to Zay Jones to set up Carlson's kick that kicked new life into a team that has dealt with adversity and drama all season, including the resignation of coach Jon Gruden in October.

Carr understood why his teammates were so upset with the league's decision to move the game.

"I wanted to play because I have a routine," Carr said. "But life's going to throw us curveballs. Whether I agree or don't, it doesn't matter."

The Browns were ravaged by positive COVID-19 cases last week. Despite the league postponing the game for two days, an asymptomatic Mayfield was unable to produce a negative test in time to play. Cleveland was without a dozen regulars.

The Browns were also without Stefanski, forced to miss his second big game in less than a year after he tested positive.

"That locker room right now is hurting," said acting Browns coach Mike Priefer. "That’s the most I’ve seen it in that kind of pain. You’re upset when you lose. Obviously you’re joyous when you win. But when you lose that type of game, that was tough.

Nick Chubb's 4-yard TD run came shortly after the Browns got a turnover they desperately needed. They jarred the ball loose from Carr, who fumbled near midfield and appeared to injure his leg while being taken down by Sheldon Day and others.

Carr was checked by trainers before limping to the sideline. He came back for the Raiders' next possession and finished 25 of 38 for 236 yards and a touchdown to Bryan Edwards.

Cleveland's issues up front led to a major shift, with Pro Bowl left guard Joel Bitonio sliding over to play left tackle as Jedrick Wills Jr. was one of the Browns' COVID-19 cases.

Bitonio had a brief stint at tackle in training camp a few years back after perennial All-Pro Joe Thomas retired.

For the second straight year, Browns chief of staff Callie Brownson was called on to fill in for an assistant coach. With acting running backs coach Ryan Cordell out with COVID-19, Brownson stepped in. Last year, she became the first woman in league history to work as a position coach during a game.

Brownson is in her second season with Cleveland. She was recently hired as coach of the U.S. women’s national team for this summer's world championships.

Raiders: LB Will Compton was a late scratch. He left the team to be with his family following his mother's unexpected death. ... LB Divine Deablo hurt his shoulder in the third quarter. ... S Jonathan Abram immediately went to the locker room with a shoulder injury midway through the fourth period and didn't return.

Browns: Star DE Myles Garett hurt his groin in the second half but stayed in. ... DE Takk McKinley was carted off in the third quarter with a potentially serious ankle injury. McKinley covered his face and struggled to contain his emotions while being taken to the locker room.