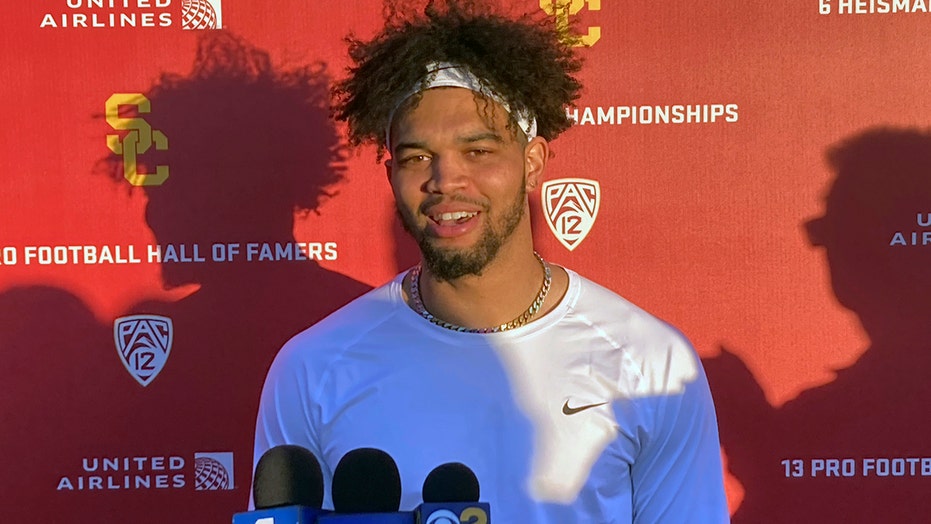 Caleb Williams missed the entrance to work on the first day of his new job at Southern California. He jogged out of the John McKay Center and headed the wrong way down McClintock Avenue before he got pointed to the right door for practice at Howard Jones Field.

Sure, the quarterback with Heisman Trophy buzz is still getting used to his new home, even though he's been in town for a month now.

Williams will have plenty of time to learn all the routes on and off the field before the Trojans get to the first game of the Lincoln Riley era in about five months.

Williams and Riley went to work Tuesday night for the first practice of spring football in a remarkable rebuilding project at the West Coast's most storied college football program.

The former five-star recruit who followed his head coach from Norman to Los Angeles is excited by the opportunities presented in rebuilding a team that has undergone a comprehensive facelift after winning only four games last season.

"It's a great day to be out here in sunny Southern California," Williams said. "It's just a little weird, because you have new colors, new logos and all those things. But it's been really, really fun."

After seizing the starting job at Oklahoma midway through his exciting freshman season, Williams is starting over on the West Coast with a wealth of endorsement deals and ample uncertainty. But it isn't a completely fresh start, and that's important to Williams.

Riley is here, as are former Sooners receiver Mario Williams and several key assistants and support personnel from Oklahoma. Williams also was already friendly with several Trojans — including his probable backup at USC, Miller Moss — from workouts and camps.

"I know a lot of guys out here already, because I come out here and train all the time," Williams said. "A bunch of guys that were highly recruited athletes. But it is a pretty unique roster (at USC). We've got a lot of transfers, and that's pretty unique to USC's history. They've always been able to get whoever they wanted by recruitment, things like that."

Riley also appeared to be thrilled to get to work after his stunning move to USC. The head coach participated actively in individual workouts with his new players, even filling the role of a defensive back during passing drills.

"It's the hottest first spring practice in my life, for sure," Riley said of the 80-degree temperatures. "But it was amazing. ... I’ve been waiting 100 days for this, man. The way the players are responding, the way the staff is coming together, it energizes me. It excites me. I was so ready for this day to be here."

Riley and Williams were joined by the full complement of newcomers to USC, including touted running backs Travis Dye (Oregon) and Austin Jones (Stanford). Riley and defensive coordinator Alex Grinch are teaching schemes to their new players, but they're also spending much of spring building the team bonds and togetherness they'll need in the fall.

USC could have well over two dozen transfer players on its roster by September, since Riley expects to add more transfers after spring ball shakes out at other schools.

"The main goal right now is learning how to practice, learning how to do things in a championship manner, learning how to come together as a team," Riley said. "By the time we kick off the first game, this is going to be the most unique roster in the history of the school and one of the most unique rosters in the history of the sport. (There's) a challenge there for us to really bond, so we've got to do that and establish our culture and identity. The other things are important, but that's going to be the most important."

Williams knows how to get to practice now, but he's taking his time to learn his way around USC. When asked what had surprised him about campus so far, Williams laughed.