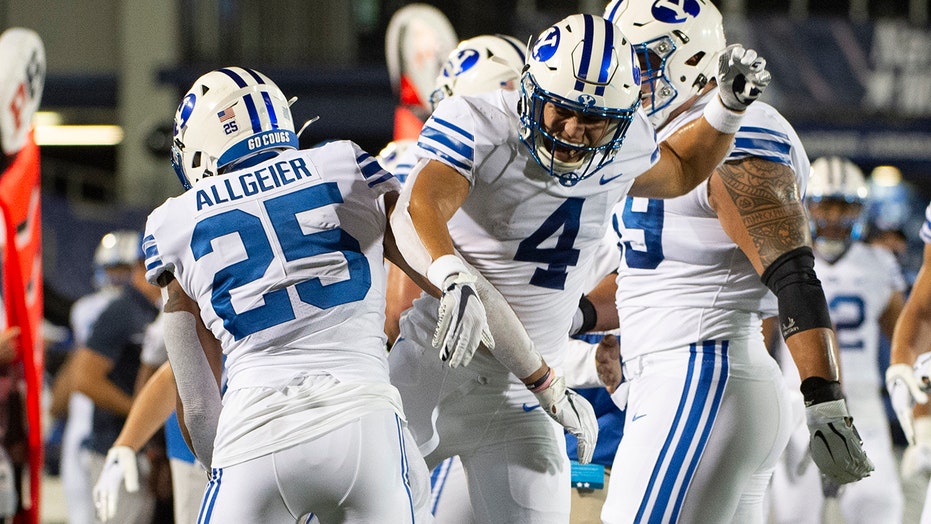 BYU coach Kalani Sitake did a fine job of keeping his players safe from COVID-19 while getting them ready to open a new football season.

Ken Niumatalolo wished he could have done the same thing at Navy.

Tyler Allgeier ran for 132 yards and two touchdowns, and the Cougars put the clamps on Navy's usually potent triple option in a season-opening 55-3 rout Monday night inside an eerily empty stadium at the Naval Academy.

BYU scored touchdowns on each of its first two possessions, led 31-0 at halftime and coasted to its most lopsided victory since a 70-6 blowout of Wagner in October 2015.

“We knew we had to be physical up front, tackle well and block well on offense," Sitake said. “All of camp, our offense was doing this — and it made our defense better."

Niumatalolo, on the other hand, put most of his emphasis in camp at doing whatever it took to keep his players safe from the coronavirus. That approach proved costly in the opener.

“Boy, that game was 1000 percent my fault," Niumatalolo said. “Obviously, we weren’t prepared. One team was playing football. There’s nobody to blame but myself. I erred on the side of trying to keep our guys safe. I'd say it's the worst Navy football game we ever played."

Because of the COVID-19 pandemic, the event had none of the pageantry and atmosphere usually associated with a football game at Navy. There were no lavish tailgates in the parking lot, no flyover before the opening kickoff, the Brigade of Midshipmen was not allowed in the stadium and the 34,000 seats remained vacant due to restrictions ordered by the state of Maryland.

It took some doing to make this game happen. The Midshipmen were originally scheduled to open against Notre Dame and the Cougars were supposed to play Utah, but both those games got scrapped. So the athletic directors of Navy and BYU arranged this matchup, which marked the first time since 1989 these schools played each other.

With no one in the stands and no cheerleaders on the sideline, all the noise was made by the players — especially those in front of the Cougars bench. The offense yelled when the defense repeatedly stuffed Navy's bid to move the ball, and the defense roared as Allgeier, Lopini Katoa and quarterback Zach Wilson moved downfield at will.

Allgeier averaged 9.4 yards per carry, Katoa ran for 80 yards and scored twice, and Wilson went 13 for 18 for 232 yards with two touchdowns before leaving in the third quarter.

Navy went 11-2 last year and led the nation in rushing, averaging 360.5 yards per game with Malcolm Perry running the offense. Perry is now with the Dolphins, and his successor at quarterback, senior Dalen Morris, rushed for two yards on seven carries before being pulled with the score 38-0.

“We challenged our team to be physical and I’m glad that showed up," Sitake said. “It was just a great thing to see as a head coach."

BYU finished with 580 yards and Navy could muster only 149 — the second-lowest total in Niumatalolo's 13 years at the school. It was also the team's most lopsided defeat under his direction.

“You ever see us play like that before? You hope that it doesn’t turn out like that, but there was a lot of concern," Niumatalolo said. “The last time we tackled anybody was the bowl game, nine months ago. I made a decision on the safety side of it, and we were weren’t prepared."

The contrast in the teams was demonstrated during the first two series. Navy ran three times before punting, and on the Cougars' first play, Wilson launched long pass to Gunner Romney that fell incomplete.

That loosened up the Navy defense, which offered little resistance during a seven-play, 74-yard drive that ended on a 34-yard run by Allgeier.

After another three and out by the Midshipmen, Katoa ran for a 39-yard TD for a 14-0 lead.

The 31-0 deficit at halftime was Navy's largest at home since trailing by the same score against Connecticut in 2002.

BYU: The Cougars were adept running the ball, efficient passing and dominant defensively. It was almost a flawless performance, one that bodes well for a team looking to sweep an eight-game schedule that includes North Alabama, Texas State, Troy and Western Kentucky.

Navy: Niumatalolo must find a way to keep his players safe while working on tackling, blocking and other such fundamentals. The Midshipmen has thus far avoided a major coronavirus scare, but they're not playing football very well.

BYU faces another service academy, Army, on the road Sept. 19.

Navy opens play in the American Athletic Conference at Tulane on Sept. 19.