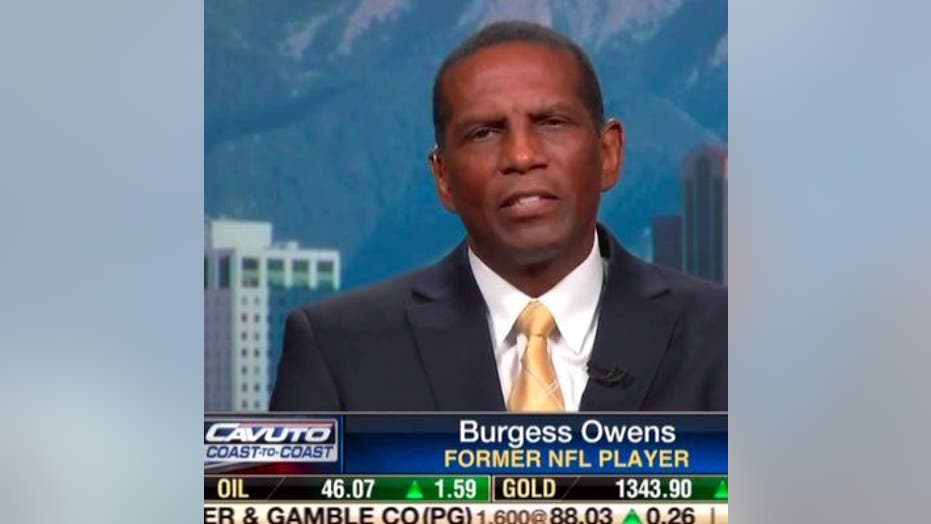 Burgess Owens, a former player for the New York Jets, said that he is prepared to stop watching the NFL because of commissioner Roger Goodell’s encouragement of teams to consider signing Colin Kaepernick and players choosing to peacefully protest during the national anthem.

“If Goodell allows Kaepernick to come back, if they allow players to kneel during the national anthem, I’m willing to not watch the game,” Owens told Sports Illustrated’s JetCountry.com. “The only thing that can change the league is to change commissioners. This has been going on way too long, it is four years of this mess.”

Owens played for the Jets and Oakland Raiders during a career that spanned 10 years. He is currently running for Congress in Utah as a Republican, and he’s also one of the few former black players who agrees with President Trump when it comes to peacefully protesting during the national anthem before football games.

Owens also said that the movement to bring back Kaepernick isn’t based on meritocracy.

“If it was a meritocracy he would be out there anyway, he would work hard, he would prove himself. He wouldn’t be taking someone else’s position. We’re looking at affirmative action for a Marxist. We’re approving their ideology,” Owens said.

“If we’re going that route, we should also ask Tim Tebow to come back. It doesn’t matter how long he’s been out of the game. It doesn’t matter his talent. He was a Christian who kneeled in prayer and was a positive on his team,” Owens added. “The reason why Tim Tebow, as talented as he was with the Denver Broncos, the NFL didn’t like his essence. They thought he was too distracting … too distracting to his team and the organization.

Owens continued: “Meanwhile we’re willing to have the distraction of a Marxist, a Castro, brother-loving Marxist to come back and play that many Americans don’t want to see him play. I just find it very disappointing. The NFL lost 15 percent of their audience last time, maybe a little bit more. The goal has been to increase their base, their revenue by going overseas to places like China, Mexico, and England. They don’t care enough about their fans who love this country.”

Owens says that Kaepernick should not be praised during his time away from the NFL.

“We have too many Americans now accepting the notion that the flag should be a place where people should be ashamed of or take a knee, that’s what it comes down to,” Owens said. “I am disappointed that so many people are acquiescing today. They don’t understand the American way, they don’t understand the price paid. They need to understand that we can’t be bullied and [also] that we’re not an evil country. There is no other country in the world with the mixing of races and tolerance. We have to change the current narrative.”